Postcards from the Left ease liberals on the edge

PHOTO BY DAVID ANDREATTA Patricia Hogenmiller, an organizer of Postcard Fridays, writes postcards at Soul Coffee and Jazz at Village Gate on Friday, January 24, 2020.
It was Friday morning at Soul Coffee and Jazz, a cozy coffee shop in Village Gate, and Penelope Carter hunkered down at a table over an array of postcards, stamps, and magic markers, as she has done nearly every week for the last three years.

There, she penned postcards to members of Congress urging them to pass legislation banning facial recognition technology. At a nearby table, three women wrote representatives asking that political contributions from foreign-owned corporations be disallowed.

They were among a couple dozen people writing postcards that morning. Some called on a bank to stop lending to fossil-fuel companies. Others urged voters in a swing district to vote Democratic.

“Sometimes you just feel like you’ve got to do something,” Carter explained of her Friday routine. “Even if it’s just a little something.”

At a time when political movements hinge on hashtags, viral videos, and manipulating big data, the quaint postcard has become a tool of resistance for a subset of mostly older liberals living reluctantly in the age of President Donald Trump.

Organizers of “Postcard Fridays,” as the weekly gathering is known, estimate the endeavor has drawn a few hundred people and generated close to 56,000 postcards since it began in February 2017. On Friday, two newcomers joined the group, paying $4 apiece for 10 postcards and postage — the standard price of admission. They write to their representatives, state legislators, local lawmakers, and voters, urging them to hold Trump accountable. Sometimes they write to Trump himself. They’ve tackled everything from immigration, judicial appointments, and reproductive health to elections security and gun control.

The Friday gathering is one of many postcard parties that have popped up around the country since the 2016 presidential election. They convene in coffee shops, pizza parlors, bars, and participants’ homes. Postcard Fridays organizers said they have satellite groups in the suburbs.

The growth of these clubs has been fueled by a marriage of old-fashioned word-of-mouth and modern social media networks. Postcards for America, which targets lawmakers on matters of legislation and public policy, has 9,700 members on Facebook and has chapters in 19 states.

Postcard Fridays writers said their goal is less to sway lost-cause lawmakers and voters than it is to preach to a like-minded choir. They described their pursuit as part activism and part therapy.

“There’s a certain synergy that happens,” said Trish Harren, who co-founded the gathering. “People are just feeling frustrated, and here we can calmly sit down together, strangers and new friends, and it is honest to goodness, for some people, pretty therapeutic.”

Patricia Hogenmiller, the other co-founder and a longtime friend of Harren’s, nodded in agreement.

“They say this releases their stress rather than sitting home screaming at the TV,” she said.

What impact these postcard-writing campaigns have is difficult to measure. Writers at Soul Coffee and Jazz said they like to think their missives are read upon reaching their destination, but acknowledged not knowing what becomes of them. 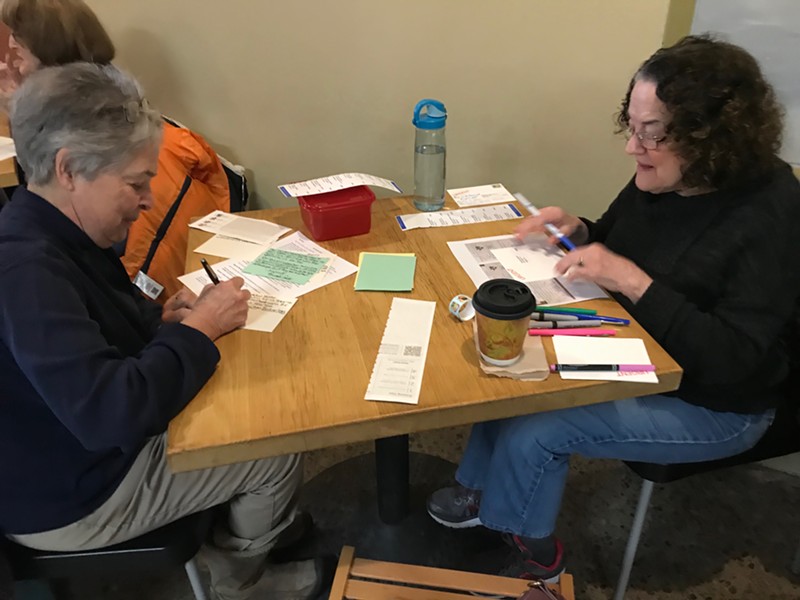 Perhaps the most validation writers felt occurred when Anthony Brindisi, a dark horse Democratic candidate for Congress in central New York, narrowly defeated the Republican incumbent in 2018 by about 4,500 votes. The group wrote 13,000 postcards to voters urging them to cast a ballot for Brindisi.

“I really think we own part of that,” Harren said. “I like to think we got people out of their houses who might not have shown up.”

As they packed up their supplies of postcards, markers, and stamps, as the writers filed out of Village Gate after an hour or so, Hogenmiller and Harren figured the group had penned upward of 500 postcards.

What difference will those postcards make?