As you probably remember from building sugar-cube packet boats in third grade, the Erie Canal was an immensely important waterway that helped to define New York State during the 19th and 20th centuries. While the boats and barges that once used the canal as a literal artery of commerce are mostly gone — although boaters can still use the canal system — the port towns that popped up along the waterway remain. Many of them offer up old-school charms of days gone by, as well as a mix of recreation opportunities, unique shopping, and frequent special events. That makes them perfect spots for exploration in the summer.

The Canal originally ran from Buffalo to Albany, with port towns all along the way. For the purpose of this piece we're focusing on the four port towns in the Greater Rochester area: Brockport, Spencerport, Pittsford, and Fairport. For information about port towns outside of that area, check the New York State Canal System website (canals.ny.gov) or the Erie Canalway Heritage Corridor site (eriecanalway.org). 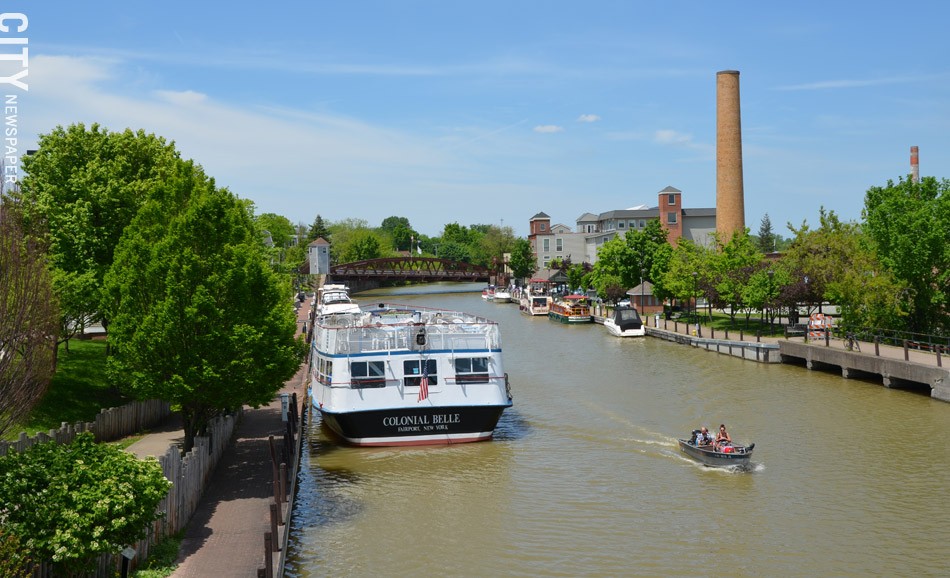 To the east of Rochester on Route 31F you'll find Fairport, which remains a bustling community. The canal-adjacent area of Fairport is packed with a variety of shops, most of them independent retailers. In Fairport Village Landing be sure to check out Red Bird Market (130 Village Landing, Fairport; redbirdmarket.com), which is packed with interesting locally made food products like jams, jellies, and flavored peanut butters. The Fairport Public Library is next door, and a farmers' market takes place in the Landing parking lot on Saturday mornings, May through November. You'll also find an abundance of restaurants in the canal area, everything from Towpath Café and Riki's diner, to Mexican restaurant Blue Cactus and Shorts Bar & Grill (the bar is renowned for its frequent karaoke nights).

To get a better look at the canal, and to learn more about its history, book a tour on the Colonial Belle (223-9470, colonialbelle.com), which cruises the canal from mid-May through October. The two- to three-hour tours have food and entertainment options, as well as a few specific themed cruises, including a murder-mystery tour.

Fairport is home to several special events throughout the summer. Fairport Canal Days take place June 6 through June 8, with arts and crafts vendors, food, and live music, plus the annual rubber-duck race down the canal.

Weekly events include classic car "cruz nites" on Tuesday evenings and a live concert series at the gazebo at Vincent Kennelly Park every Thursday night from June 5 through August 7. Musical styles vary from the Four on the Floor Jazz Ensemble (July 10) to Irish folk from the Dady Brothers (July 24).

While you're at the park, seek out the nearby Moonlight Creamery (36 West Avenue, Fairport; moonlightcreamery.com), which is home to some insanely tasty, creative ice cream (try the Maui Wowie), shakes and coffee drinks, and intricate artisan truffles. Grab a cone, sit at one of the park's benches or tables, and watch the world drift by.

Closer to Rochester is Pittsford, and its canalside offerings are arguably the most cosmopolitan of the port towns. The Schoen Place area is home to a variety of terrific restaurants. You can grab gelato from Jembetat Gallery, or have a drink or meal at Aladdin's Natural Eatery, Simply Crepes, The Coal Tower, Label 7, or Olives. Lock 32 Brewing Co., recently opened, specializes in locally made beers.

Schoen Place and Northfield Commons are also a great shopping destination, with specialty stores like Mostly Clay, Pittsford Wine & Spirits, Yarne Source, The Game Gamut, Beads 'n' Things, The Map Shop, The Topiary, and Pittsford Lumber. You'll find even more shops and restaurants on the nearby Main Street in the Village of Pittsford, as well as the Pittsford Public Library across the canal.

Recreation opportunities abound around the Pittsford canal. The paved trails are frequently used by runners, walkers, and bikers. In fact, you can bike along the canal even if you don't own your own ride. Towpath Bike & Multi Sport (3 Schoen Place, towpathbike.com) rents adult bikes, kid bikes, and even tandem bikes by the hour, day, or weekend. For a more relaxing view of the canal, take a ride on the Sam Patch (samandmary.org), which departs from Schoen Place for tours throughout the summer.

East of Rochester you'll find Spencerport, one of the quieter port communities. If you're looking to hike along the canal, Towpath Park offers a nice entry point. Walk or bike the gravel paths along the Erie Canalway Trail, which reportedly runs for 365 miles between Albany and Buffalo (I didn't have the roughly three weeks it would take to find out for myself, so I'm going to take the Canal System's word on that one).

Across the canal you can also find the Spencerport Depot and Canal Museum (16 East Avenue, Spencerport; spencerportdepot.com), a modest building devoted to preserving the history of the canal and of the Village of Spencerport and Town of Ogden.

Spencerport Canal Days bring crafters, festival foods, and live entertainment to town, and this year take place June 26 and 27 (spencerportcanaldays.com). It even has its own race, featuring "canalligators."

Shopping options in Spencerport are more limited than its eastside canal counterparts, but there are several restaurants and shops. If you're looking to lose hours of your life, check out the Book Centre (42 Slayton Avenue, 352-1890) in the nearby shopping plaza. Who knows what literary gems are hidden in the stacks of books towering over the aisles? Summer reading season is almost here...

Further to the west is Brockport, a canal town that is also a college town. As such you'll find a mix of quaint retail, like the Red Bird Tea Shoppe, Bitter Sweet, and the Lift Bridge Book Shop (one of the few independent new-book sellers left in the area), as well as student-friendly outposts like head shops and comic-book stores. There are also a variety of restaurants and ice-cream shops and the like.

Stop by the Brockport Welcome Center at 11 Water Street for maps and information about the canal. Take a stroll along the nicely paved canalside, or you can borrow a bike — for free — from the welcome center. There are picnic tables, educational placards, and even grills for an impromptu barbecue.

Just a block or two down from the canal you'll also find the Strand (93 Main Street, Brockport; rochestertheatermanagement.com/strand.htm), which plays first-run films. So you can get in two summer pleasures in one afternoon and evening: a walk along the water and eating popcorn while watching a big Hollywood blockbuster.