PHOTO COURTESY THE ARTIST AND WEATHERSPOON ART MUSEUM Lucinda Devlin’s photograph, “Electric Chair, Greensville Correctional Facility, Greensville, VA, 1991,” from the series “The Omega Suites,” is part of a survey of her work currently on view at Eastman Museum.

I first viewed images from Lucinda Devlin's daunting photographic series, "The Omega Suites," in 2012, when the work was displayed at SUNY Brockport's Tower Gallery. The photographs — sobering, meditative looks into execution chambers and other spaces where the condemned spend their final hours — have always stuck with me. Devlin's work is being shown in Rochester once more, and this time selections from "The Omega Suites" are exhibited alongside pieces from two of her other series in the Eastman Museum's Project Gallery. Organized by the Weatherspoon Art Museum (The University of North Carolina at Greensboro), "Sightlines" is the first major museum survey of Devlin's work in America.

Organized into three sections, "Sightlines" spotlights images that provide a privileged look at spaces few see, and which capture distinct moments in time. Works from the "Pleasure Ground" series, created between 1977 and 1990, reveal the luxurious and often eccentric interiors of spas, nightclubs, and hotel rooms.

Devlin's approach to photography involves a sharp eye for perspective and lines that lead the eye where she wants it to go, bringing her viewer's attention to humorous or baffling subtleties. Character and quirks abound within these dated spaces.

Fancy hotels sure love silly themes, Devlin's work seems to say. Her 1989 image of the Burnsville, Minnesota, FantaSuite Hotel's Moby Dick Room centers on an opening in the wall that leads to a bathtub. The warmly lit space looks inviting enough, lined with tiles and teeth — the entrance to the little retreat is built out to resemble the white whale's gaping maw, and you can just detect seascape murals on the wall around the mouth.

There's a certain low-brow glamor to the 1979 picture of the stage room of the Black Poodle Club — a topless strip joint in Nashville — with its three disco balls and tinsel curtains casting shimmery specks on the dramatically red-lighted floor.

While "Pleasure Ground" focuses on spaces outfitted to indulge the body and the senses, Devlin's "Corporal Arenas" series, created between 1982 and 1998, is concerned with environments in which "the body is required to maintain a level of passivity and loss of control," she says. These are portraits of spaces where "the body is being acted upon and is in many ways passive, on display, and an object of careful scrutiny."

This series includes pastel-hued, Zen-fully empty massage rooms, the shrine-like alcove of a casket showroom, and a surgical operating room that is entirely dark except for the glare of the overhead spotlight — alluding to a sort of interrogation of the body.

Unlike the heavy emptiness in the rest of the exhibited work, the 1986 image, "Dog Hysterectomy, NY State Fair, Syracuse, NY," is populated with a flurry of movement. Long-exposure captures a bustle of surgeons and the stirring crowd from behind, reflected on the glass that separates spectators from the staged operation. The illusion of the medical environment is blown as Devlin's scope panned out from the boxed-in procedure to include the rafters of the fairground shed that houses this temporary space.

Ironically, by voiding environments of figures, Devlin can emphasize the relationship between bodies and the various spaces constructed for specific purposes for those bodies. 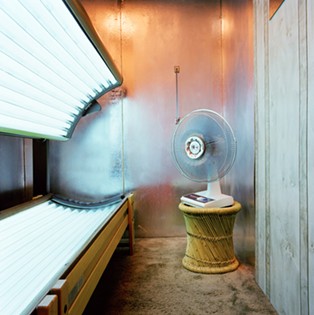 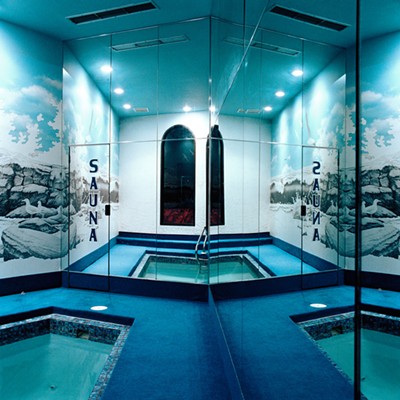 For her series, "The Omega Suites," created between 1991 and 1997, Devlin exploits the emptiness of the spaces so that the viewer can more easily populate them. She says she wanted the viewers to imagine themselves inside the photographs — "To become the condemned, the executioner, the witness."

Devlin puts a lot of thought into the shifty wordplay of her series titles, but this one was borrowed from the assistant warden at the Territorial Correctional Facility in Cañon City, Colorado. "It was a perfect reference for a project depicting numerous execution chambers and holding cells, where the final event in a condemned person's life takes place," she says.

"The Omega Suites" are bleak rooms of cold utility, barren of comforts and natural light, but not without their fascinating oddities. The wood-paneled and carpeted lethal injection chamber at Idaho State Penitentiary is anomalous amid so many other images of rooms that read as clinical or definitely part of the clinker. One striking image that stands out from the rest depicts the blocky, bright yellow electric chair of Alabama's Holman Unit.

Prison staff told Devlin the chair had been built by an inmate using available materials, "but even more extraordinary is the fact that within the prison, the chair was referred to as 'The Yellow Mama,'" she says. "How could an apparatus used to kill people be paired with a mother image — one which is nurturing and brings forth life?"

She calls this particular photographic experience "the most horrendous of all" — shot on a sweltering day in the Deep South, she noted the irony of a fan sitting on the floor. She says: "What's the fan's purpose? To cool someone who is about to be executed?"