Pop-up pizzerias for the people 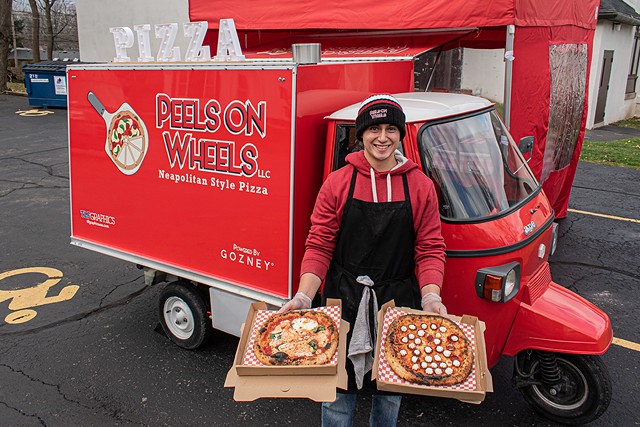 Two things I love are good pizza and pop-up restaurants — and Rochester is a cradle for both.

Besides the stalwart pizza shops that have exploded into local chains, new outfits have emerged in rebellion against the tired slice of pepperoni under the heat lamp. Chicago-style and Detroit-style specialists have found homes here.

So, too, has the city embraced the pop-up, in which chefs all but invade an underused kitchen, whether it be in a bar or a private dining room or a dorm room, for a few hours until their ingredients run out. With their limited time and limited audience, these kitchen takeovers give diners not only the thrill of an improvised meal but of a sense of urgency. They’re like a flash mob, with less choreography and more food.

Imagine my joy, then, when I learned that two pop-ups in town are catering to pizza lovers. 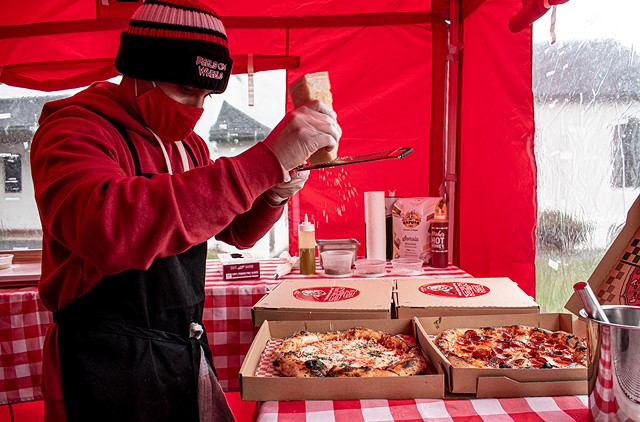 Peels on Wheels is a mobile pizzeria specializing in fast-baking Neapolitan-style pies for pop-ups and private events. You may have seen it around town. The operation is a refurbished red and white Piaggio Ape P601 (pronounced AH-peh) equipped with four Gozney Roccbox portable ovens that between them are capable of churning out as many as 30 pies an hour.

Transforming an Ape, a three-wheel mini-truck whose name translates to “bee” in Italian and is ubiquitous in the boot-shaped land of fantastic boots, into a pizzeria was the brainchild of Luis Perez. He imported it from Naples, Italy, to lend an air of authenticity to the dining experience.

I felt lucky to find Perez recently at Three Heads Brewing. I had a Margherita with Brussels sprout shavings ($13) that I reluctantly shared with friends. It was piping hot, with the house-made mozzarella relaxing onto the basil-scented fresh tomato sauce, and its tiny charred dough bubbles were a perfect sharp accent to complement the cheese and sauce.

Perez, a native of the South Bronx, where pizza was the daily bread for him, “opened” Peels on Wheels in July 2019 after spending nearly half his life — about 15 years — working in restaurants, primarily pizza shops. Enthusiasm for pop-ups was gaining momentum locally then, but the pandemic put a stop to popping up everywhere.

To weather the shutdown, Perez made DIY pizza kits that enabled anyone to make his pies. He estimated selling 150 each week during the dog days of quarantine. He ventured out with his truck when venues began reopening, but has suspended popping-up for the winter season amid a resurgence of the novel coronavirus.

Peels on Wheels wares can still be had, though, by way of the DIY kits. Perez has also partnered with the Rochester Brainery to host online classes on pizza making. Though his first two classes filled up quickly, more are scheduled for Dec. 18 and Jan. 8. Classes are $36 and come with the pizza making kits that Perez. 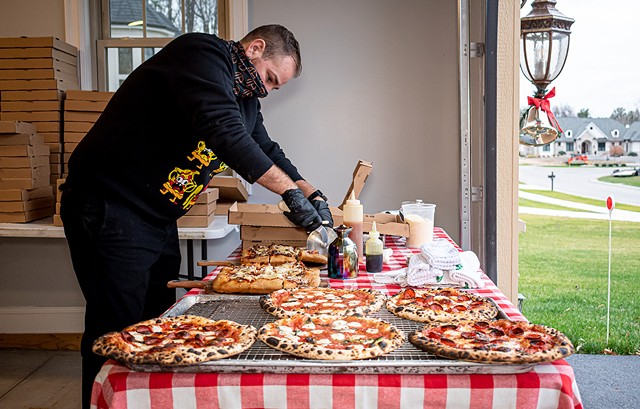 The other new pop-up pizzeria to flourish in 2020 despite the odds was a duo calling themselves Doughboyz.

I thought the name was an homage to Ice Cube’s “Doughboy” character in “Boyz n the Hood,” but it turned out to be the moniker for longtime friends Anthony Yockel and Jim Zobel, who developed a talent for making delicious dough during their time in and around the local restaurant scene, including Branca. Yockel still makes dough for the Swan family of restaurants. If you’ve had Swan Dive’s Wutang or Vern’s Red Pizza, you have Yockel to thank.

When restaurants closed in March, Zobel bought a pizza oven to make food at home. He invited Yockel to lend a hand, and they posted their creations on Instagram. The popularity of their work on the social media network led to the Doughboyz popping up out of Zobel’s home. Customers pre-ordered pies on Instagram throughout the day, and the Doughboyz were selling out within 20 minutes of “opening” at 6 p.m.

Once restaurants re-opened, and the state imposed its mandate that alcohol be served with food, Yockel and Zobel saw an opportunity to pop up and out of Zobel’s home.

I caught up with Doughboyz at their collaborative pop-up with Madeline’s Catering at Artisan Works, and their $13 pie was well worth the short wait. Yockel’s sourdough was a perfect match for the garlicky red base, and the huge basil leaves cut the sharp tang of tomato. These pizzas are made to eat right away, and that is what I did. This time, I didn’t have to share with anyone. My friend got a pizza with purple potato, smoked gouda, pork belly, parsnips, all on a light blanket of mozzarella over cream sauce and basil oil for $15. His fast work of it was a testament to its tastiness.

Doughboyz maintains a weekly pop-up schedule that they share on Instagram, and all orders are taken over the platform as well, so if you want a taste you’d be wise to follow their account (@doughboyzroc).

They partner with Mortalis Brewing in Avon, Livingston County, often and have made culinary collaborations with Chick’n Out. Though they have a commissary kitchen per state regulations, they don’t plan to have a brick-and-mortar shop any time soon. The pop-up model works for them and is reciprocal — attracting customers to their brand while helping local businesses stay open during the pandemic. I would not have thought that pop-ups could survive the pandemic, but they seem to have hung on in Rochester.

The pair of them in Peels on Wheels and Doughboyz is a garlic-oiled lining to the dark cloud of 2020. Catch them when you can. Here’s to the chase!

Chris Thompson is a contributing writer for CITY.