The way we eat out is changing. In modern dining, it's not unusual for a restaurant to appear in one place one week, and another the next; or for an establishment to never serve the same dish twice. Such is the case with Hearth and Cellar, a pop-up restaurant and catering company run by chef Gabriel Sanders. Hearth and Cellar hosts intimate, seasonally-themed pop-up dinners at various locations in and around Rochester approximately once a month, each with a capacity of 30 to 40 people. "I think that restaurants will always have a significant place in our culture, but they'll look different in the years to come." Sanders says.

A Pittsford native, Sanders learned to cook from his father and says he always had "a great love of eating." He began cooking in earnest as a student at Haverford College, where he studied English Literature and cooked regularly for himself at his apartment. He cites Marcella Hazan's book "Essentials of Classic Italian Cooking" as crucial during the year he learned to cook.

Following his graduation in 2008, Sanders worked a stint in a South African vineyard through WWOOF (World Wide Opportunities on Organic Farms). However, Sanders says the experience led him to realize his passion lay more in the direction of food production. Upon returning from South Africa, Sanders threw himself into cooking. He got his first restaurant gig at Lento as an oyster shucker at the raw bar. "It got my foot in the door," he says. By 2009, Sanders had saved enough money to move to San Francisco. There, after an initial rocky start, he worked at several restaurants, eventually working his way up to head chef at Firefly, a neighborhood restaurant known for its diverse and seasonal menu.

After eight years in San Francisco, Sanders bought a car, packed up, and drove cross-country across the U.S. "I had no idea where I was going to end up," he says. "I hadn't really considered Rochester, and living in San Francisco for eight years had made me scared of winter."

But when Sanders did finally arrive back in his hometown, he found that something had changed. There was a much livelier food scene, he says, and new restaurants were popping up everywhere. There were good economic opportunities, great local farming, and room for growth in the restaurant industry. "All of a sudden it felt like a city that was checking all the boxes I was looking for," he says.

As sous chef and pastry chef at Lento, Sanders works full-time for the restaurant and fits in Hearth and Cellar pop-ups around his schedule on evenings when Lento is closed. Sanders anticipates taking on a reduced role at Lento as he works to grow his pop-up and catering business. He has mixed feelings about turning Hearth and Cellar into a brick-and-mortar restaurant, however. "I like the flexibility of pop-ups," he says. "I like being able to offer a wider range of experiences to diners."

Sanders describes his cooking philosophy as "seasonal" and "nourishing." He notes that the seasons change much more quickly in Rochester than in California, which pushes him to keep adapting his menus. "Cooking is more dynamic here," he says. "And when things are in season here, they're better." Sanders is a frequent visitor to the Rochester Public Market, where, even if he buys nothing that day, he checks in with farmers to see what produce is on the way.

Dining with Hearth and Cellar means putting yourself entirely in Sanders' capable hands, and the chef leaves no detail overlooked. At a Hearth and Cellar dining event at Lento on a recent Sunday, I arrived to find tables set with crisp white napkins and scattered with wildflowers. Unlike conventional restaurant dining, Hearth and Cellar events are intended to get different dining parties mingling. Sanders seats his guests at long tables of ten to twelve people. With his return visitors, he takes extra care to seat people together whom he thinks will get along.

Sanders' pop-up menus are small and well-curated, with one or two options per course and a short but thoughtful wine and beer list with pairing suggestions. (You can also bring your own wine, for a corkage fee of $15). The first course, a chilled cucumber and buttermilk soup, was peppery and refreshing in the midst of an early July heat wave. Next, there were crispy brown rice arancini stuffed with mozzarella and Gorgonzola, accompanied by a tangy tomato sauce. "It's like a grown-up mozzarella stick," said the delighted woman seated next to me. 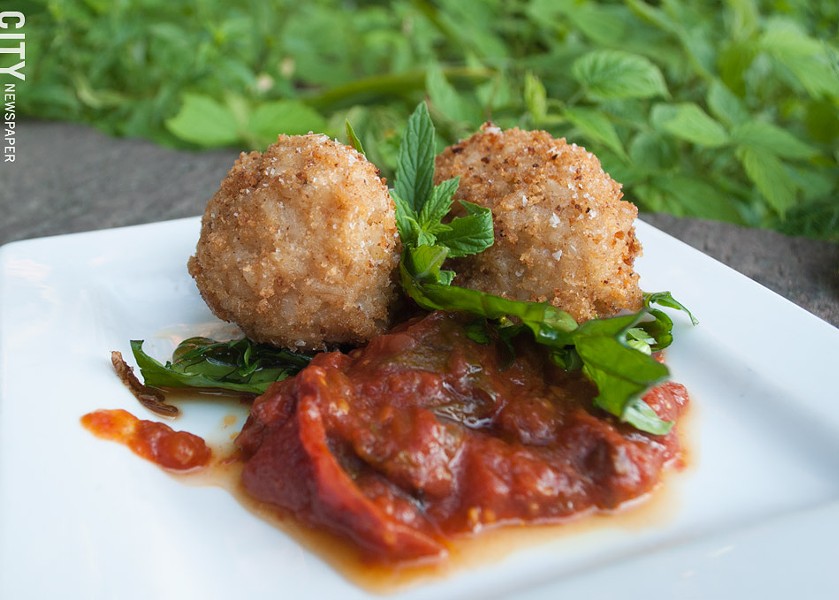 For my main course, I selected Sanders' "Fantasy of Beets," a dish of whole roasted beets — stems still on — with quinoa fritters, sautéed chopped beet greens, and dill. A bright fuchsia smear of cultured beet cream made for a visually striking plate. Following the menu's suggestion, I paired the dish with a spicy, earthy red blend wine from South Africa.

Dinner concluded with strawberry-rhubarb shortcake and whipped cream, accompanied by a jaunty pink Cappelletti spritz. As the dinner guests filtered out, Sanders thanked each one personally. He already has his next two pop-ups planned: "Summer Favorites" on August 19 will star local tomatoes and corn at Lento, and "On the Farm" on October 7 will showcase the flavors of autumn at Fisher Hill Farm in Canandaigua. Tickets ($40-$60) are available on Hearth and Cellar's website: hearthandcellar.com.