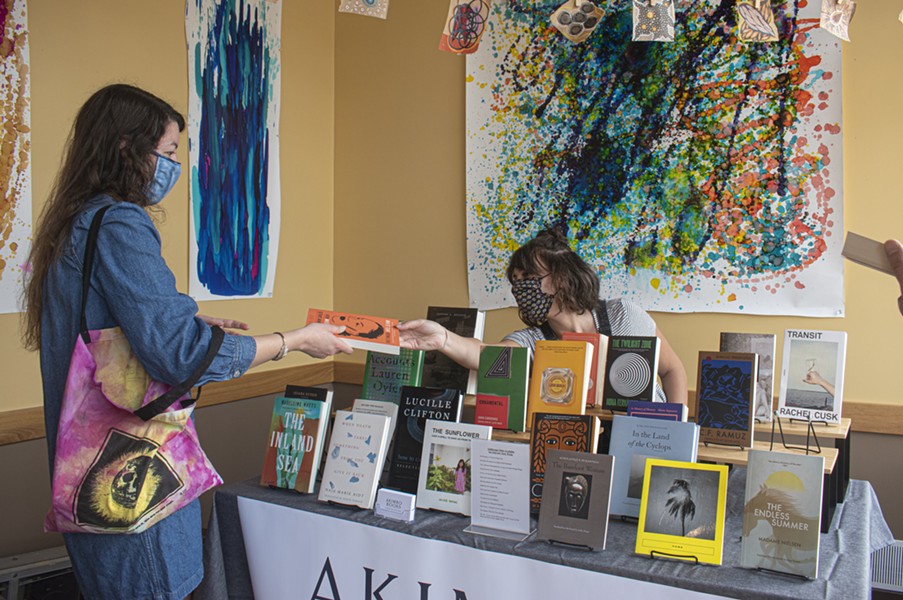 PHOTO BY JACOB WALSH Rachel Crawford (right) of Akimbo Books with a customer at a recent pop-up event at John's Tex Mex.
Customers of John’s Tex-Mex in the South Wedge typically get their tacos and burritos with a side of refried beans or mashed potatoes. On a recent Saturday, they got a side of indie lit, too.

Nestled in a back corner of the restaurant, past clusters of patrons gorging on guacamole, was a pop-up bookstore fashioned out of a small table displaying a couple dozen books — novels, essays, and poetry, mostly from small presses and international authors.

The exhibit was the work of Akimbo Books, a local online bookseller that specializes in contemporary literature and has developed a workaround to paying for a brick-and-mortar store by staging pop-up shops. In the process, it seeks to reintroduce what is a rarity in Rochester’s literary landscape nowadays: new titles.

“I think people are enjoying things again and literature is a huge part of that,” said Akimbo Books founder Rachel Crawford, who tended the pop-up at John’s Tex-Mex.

The rise of big-box bookstore chains like Barnes & Noble, Borders, and Waldenbooks battered independent bookstores in the 1990s. Indies have since been rendered an endangered species by Amazon. Most that remain, at least in the city, specialize in used books, first editions, and hard-to-find titles.

But independent booksellers carrying new titles are not extinct, and are finding innovative ways to get their wares in front of consumers without paying a dime for retail space at a time when renting a storefront is a precarious proposition.

While 2020 was a good year for publishers, it devastated bookstores. Publishers Weekly recently reported that bookstore sales fell 28 percent from 2019, citing preliminary estimates from the U.S. Census Bureau. Independent bookstores had it worse, with some stores reporting to the American Booksellers Association last year that their sales had dropped 40 percent.

“Independent bookstores were hit hard by the pandemic,” said Dan Cullen of the American Booksellers Association.

But, he said, there were signs of life. Cullen pointed to data that suggested there were 42 new bookstore openings nationwide, and association members reported that online sales jumped 630 percent last year.

“Hundreds of stores pivoted and found new ways to support their communities and spread their love of books,” Cullen said.

Independent booksellers like Crawford believe readers are less likely to discover a great new book while shopping online than in a bookstore, pop-up or otherwise. Amazon can create new algorithms, but it can’t replicate the joys of browsing or the human interaction between book buyers and knowledgeable sellers.

“What's the last movie that you watched that you really loved?” Crawford asked. “Was it a Marvel film? Or was it something super niche and international? I have both of those to bounce around with you. What kind of art do you like? What eras do you like? Those help point people in a direction that they might find a book they fall in love with.”

Her defiance of a brutal marketplace that has all but consumed small booksellers is reflected in the name of her business. Arms “akimbo” means to stand with hands on hips, elbows pointed outward — that pose of female empowerment struck by icons like Wonder Woman and “Fearless Girl” of Wall Street. 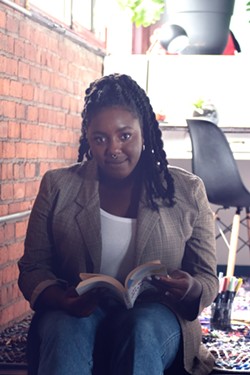 Independent bookseller Taylor Thomas, of Rochester, has taken a similar approach, selling books online and at small pop-up events around town. Her business, The Secondhand Librarian, began as a way of downsizing her own book collection and morphed into a full-time job of online sales and events.

“I offer books that I’ve loved,” Thomas said at a recent pop-up at the Luna Collective at the Hungerford Building. “Definitely more popular titles like, ‘Where the Crawdads Sing’ or ‘Little Fires Everywhere,’ but also more obscure books that I just want everyone to read so I can talk about them.”

Good bookstores are by nature subversive, offering works outside the mainstream about love and death and struggle and liberation and humanity.

There were benefits to opening a bookstore in a taco shop on a Saturday. Besides the foot traffic, the restaurant was serving pitchers of mimosa in which Crawford and her supporters happily imbibed.

A few patrons, mostly friends and established customers of Akimbo, walked into the eatery and past the pick-up counter for the pop-up bookstore.

Many of Crawford’s customers are intentional about how and from whom they buy their books. Although their titles may be available from online retailers, they want to support a local vendor. 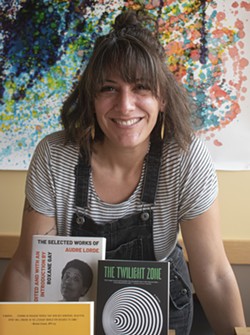 Crawford created Akimbo Books in 2016, but opened it in earnest last year after she lost her job at a bookstore during the pandemic. Her website originally focused on publishing book reviews, but eventually moved into selling books.

In addition to popping-up and posting book reviews, Akimbo hopes to host book clubs and publish interviews Crawford does with authors. Crawford, who holds a master’s degree in English from the University of Rochester, has written on a freelance basis for CITY.

“Sound like a lot all rolled into one?” Crawford asks of her ambitions on the Akimbo website. “Well, that’s what happens when mania festers in a nine-month quarantine. Because, well, it’s been a day this year.”

Rochester’s book market never fully recovered from the beating it took from the chain stores a generation ago and, later, online retail. But some have held on.

Long-standing used bookstores like Small World Books serve those with a love of the classics. Yesterday's Muse offers rare books, including signed first editions. Independent bookstores in Clifton Springs and Brockport remain a destination for city-dwellers looking for a local shop with newer titles.

But a handful of indie bookstores have opened locally in recent years.

Hippocampo, located on South Avenue, is a local woman- and Latinx-owned children's bookstore that has been in business for three years. Cerebral Kingdom opened on State Street in August of 2020 with a collection of books about the Black experience, from culture and history to spirituality and children’s books.

Local literary hub Writers & Books opened its own bookstore, Ampersand, in the fall of 2019. It operated out of the center’s home on University Avenue until the pandemic forced it online.

Alison Meyers, the executive director of Writers & Books, owned her own bookstore in Connecticut prior to coming to Rochester a few years ago. She also managed the bookstore at Oberlin College in Ohio more than 20 years ago.

“Things have changed a lot since I did that work,” she said.

Competition in the book market became fierce, downtowns in many urban centers were hollowed out, communal spaces languished.

But, Meyers said, a renewed focus on downtowns and personal connectivity — the lifeblood of traditional independent books stores — has given her hope.

“I see a wonderful renaissance of the small press and indie bookstores,” she said.