Thursday, February 27, 5 p.m.
University of Rochester Interfaith Chapel, 1045 Wilson Boulevard
Free | 276-8709; events.rochester.edu
We live in a time when so many of us are fatigued by the news. We worry that we can’t donate to all of the causes that beg for our attention. It’s gotten to the point when, here in 2020, many of us feel emotionally anesthetized. Both sides of the great divide present themselves with didacticism in our movies, music, and books. And in this indefatigable disquiet, we are tired.

To some, this presents a problem for the arts. But if art and literature tell us about the human condition, and if the individual as well as the collective experience are valued as integral to free expression, then we should remind ourselves that while the news should not be entertainment, our entertainment can still inform.

Long-debated by the ancient Greeks is the relationship between truth, community, and aesthetics, and that debate remains unresolved. This week, the University of Rochester’s Humanities Center Public Lecture Series examines the themes of community, morality, and current events with acclaimed author Valeria Luiselli. 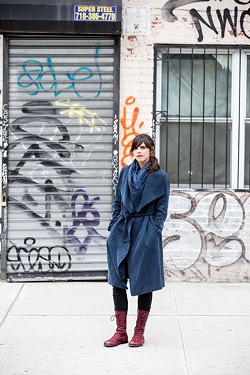 In 2015 Coffee House Press published Luiselli’s “The Story of My Teeth.” Rather quickly, it was highly acclaimed and was nominated for both the National Book Critics Circle Award and the Best Translated Book Award. Luiselli won the 2015 Los Angeles Times Prize for Best Fiction. The novel was compared to Kafka and Borges — no doubt two major influences on her writing. Those who follow international literature and small presses like Coffee House knew Luiselli, at 33-years-old, was about to get big.

Luiselli is a Mexican-born author who was raised all over the world. She has volunteered as an interpreter in the courts for asylum-seeking children at the American border. In her many months volunteering, none of the children she helped find pro bono lawyers have been granted permission to remain in the United States. Luiselli witnessed first-hand the devastation, fear, and trauma of innumerable displaced children. Using her literary platform as a driving force, she went on to write “Tell Me How It Ends: An Essay in Forty Questions” (hailed by some of indie literature’s best, including Mark Haber from Brazos Bookstore and Stephen Sparks at Point Reyes Books). The title of the book references the 40 questions thrown at unaccompanied child migrants on the intake questionnaire.

Luiselli’s third novel, “The Lost Children Archive,” is the first she has written in English. This was supposed to be her “rage” novel — the one that, in its earliest drafts, was meant to reveal her righteous indignation aimed at a system that fails the most vulnerable. She portrays the United States Immigration and Customs Enforcement (ICE) as a form of extremism, violence, and psychological torture. But instead of a proverbial fist-shaking that would incite a shared resentment in her audience, “The Lost Children Archive” is a story of grief and inhumanity, imbued with a similar humor and absurdity that readers loved in “The Story of My Teeth.” It’s in the literary milieu of Kafka and Borges, and meant to make American readers laugh and raise an eyebrow as well as lament and learn a thing or two about their own government.

A literary collage and road trip novel, “The Lost Children Archive” renders a pathos that those fatigued by current events can digest — and it’s the novel Luiselli will be discussing at the University of Rochester this Thursday.

The Public Lecture Series was founded in 2015 and this academic year it’s dedicated to the theme of communities. At this event Luiselli will be in conversation with Ruben Flores, associate professor of history at the University of Rochester. Flores’s area of focus is on U.S.-Mexican relations, and his book, “Backroads Pragmatists: Mexico’s Melting Pot and Civil Rights in the United States” (University of Pennsylvania Press, 2014), is a telling of the rebuilding of Mexico after the Mexican Revolution.

“Valeria Luiselli's beautifully crafted explorations of displacement and belonging made us determined to add her voice to our year-long conversation on our theme of communities," Humanities Center Director Joan Shelley Rubin told CITY in a phone interview. "We're delighted that she will enable the Rochester-area public, as well as University of Rochester students, faculty, and staff, to think together about migration, families, and borders in new ways.”

The University’s Humanities Center has also organized events exclusive to students. Preceding the public event on Thursday, approximately 20 students (mainly sophomores) and five faculty members read and discussed “The Lost Children Archive” together as part of an experimental Humanities Reading Colloquium. The students will have an opportunity to meet Luiselli on Thursday afternoon before the public lecture.

Rachel Crawford is a freelance writer for CITY. Feedback on this article can be directed to becca@rochester-citynews.com.