Police reform: advocates on what should come next

A panel of state Appellate Division justices overturned a lower court’s ruling that would have blocked the vote. The original ruling came after the Rochester Police Locust Club — the police officers’ union — sued to block the referendum. Voters have to approve the law that creates the board because it would remove some of the mayor’s authority. 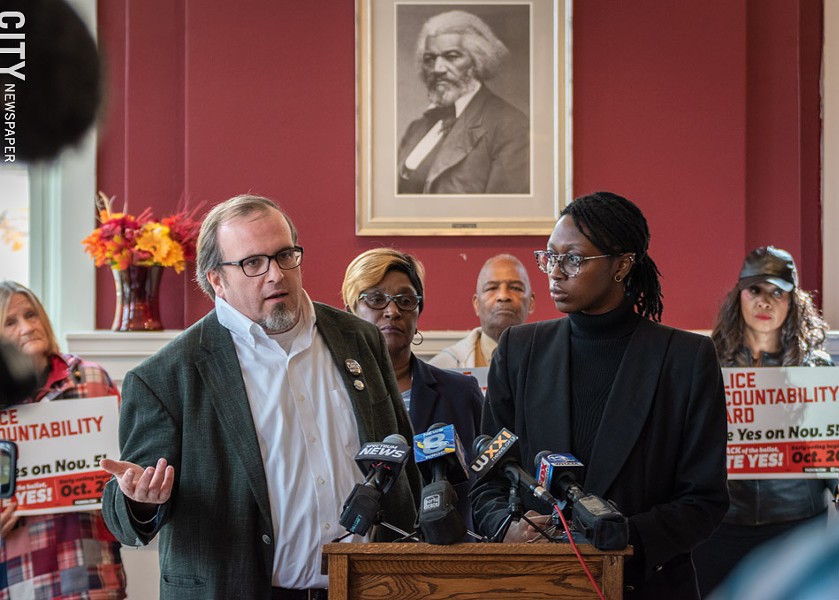 However, if voters approve an accountability board, that won’t be the end of the matter. The Locust Club is expected to sue again in an effort to get the law invalidated, continuing to argue that civilian involvement in police discipline violates both state law and the union contract.

If the union sues, the issue could be tied up in court for months.

But reform proponents say city officials don’t have to wait for a court decision to bring change to the Rochester Police Department. An accountability board is essential, they say, but additional reforms are needed, some of which the mayor and City Council already have the authority to make. Some proponents also say it’s time to push for change to a state law that shields police personnel records from public view and makes it hard even for public officials to oversee the department.

On the local level, “I think we have to look at the existing model that we have and see if anything can be done to strengthen it,” said City Council member Malik Evans.

“I think there’s definitely things we can do,” Evans said.

Rochester’s police force is disproportionately white and suburban, and increasing diversity has been a goal for the department – and for Mayor Lovely Warren – for years. The city has had some success, Warren’s chief of staff, Alex Yudelson said, “especially in the upper ranks.” The RPD’s chief and deputy chief are both African American, he noted.

There are a lot of reasons why the RPD has had trouble hiring more people of color, Yudelson said, but lack of trust in the RPD is a big factor.

“A lot of people tell us it’s the trust,” Yudelson said. “You’ve got to build it back. It’s going to take a while.”

The police chief needs to put “people who are trusted by the community, who are a known quantity in the community” in key positions, said Carlos Garcia, who served in the RPD for 22 years (and is now chief of communications for the Rochester school district). Garcia still mentors young police officers, and some young white officers who are not city residents are afraid when they patrol inner-city neighborhoods, he said.

The Rochester Police Department used to have a section office in each quadrant of the city, which gave police officers a stronger, visible connection to the neighborhoods they served. That can foster a public safety approach known as “community policing,” which emphasizes the importance of police officers getting to know residents and partnering with them. It doesn’t guarantee better police-community relations, but it enables it.

The city abandoned its section offices in 2004, though, arguing that it would save money. That structure, said City Council member Malik Evans, is “something that never should have been undone.”

“Community policing is something we really, really, really have to focus on, almost like a laser,” Evans said. A Police Accountability Board wouldn’t necessarily improve police-community relations, he said, since the police union has fought the board’s creation.

“Whether or not this gets approved,” Evans said, “the community policing angle and the trust angle will still need to be built.”

City officials will have to be willing to spend money on community policing to ensure that it works, Evans said. The police chief will also have to be “as accessible to the community as possible,” he said, to assure the community that he’ll be fair, that problems will be thoroughly investigated, and that the department’s Professional Standards Section, which investigates civilian complaints against officers, will be “beyond reproach.”

The city is reinstating physical police section offices, which it disbanded in 2004, arguing that the move would save money. The RPD currently has section offices downtown (in the Sibley Building) and on North Clinton Avenue, and the city is planning three more: on East Main Street, on Lake Avenue, and in Bullshead.

The mayor and City Council can push for improved training and mentoring, especially in de-escalation techniques – learning how to remain calm and defuse volatile situations. When police interact with people in emotional situations, with people in a mental health crisis, with an emotional or frightened teenager, with people who distrust police, confrontations can escalate quickly.

The Warren administration agrees with the need for more de-escalation training, Yudelson said.

“We have had enough incidents that that’s an issue,” he said.

The Rev. Lewis Stewart, a civil rights advocate, wants the RPD to adopt a de-escalation training program called ICAT (Integrating Communications, Assessment, and Tactics), which is designed to teach officers how to communicate and negotiate in volatile situations, even dangerous ones.

And, Stewart said, the RPD needs much stronger anti-racism training. “You can’t just invite a black person in to give a talk,” he said.

For example, controversial RPD practices include “corner sweeps,” clearing groups of people on street corners or in front of businesses in inner-city neighborhoods. While some businesses request it, the practice is “clearly unconstitutional,” said John Klofas, professor of criminal justice at the Rochester Institute of Technology, and needs to be changed. And the mayor has the authority to recommend that change.

Two organizations that have long been involved in police reform efforts – United Christian Leadership Ministry, which the Rev. Stewart leads, and the Rochester Coalition for Police Reform – will also be pushing for additional measures. They want all RPD officers to have a\n annual psychological evaluation. And they want a panel of three civilians to participate in interviews of police officer candidates.

That would let civilians get a sense of the officers’ potential and share their thoughts with the police chief, Stewart said. “Civilian participation in the hiring of police is very necessary in this day and age,” he said.
Carlos Garcia, who retired from the RPD in 2008, emphasizes the need for a change in police culture. “Police officers often see themselves as warriors rather than guardians,” he said.

“It’s great to be in the black uniform,” he said. “It’s great to be in the SWAT Team. That should be about 5 percent of your job. You shouldn’t be in tactical mode all the time.”
Klofas pointed to what he said is the RPD’s insularity. There are progressive police chiefs and departments in other parts of the country, he said, but Rochester’s chiefs and its department tend not to interact with them. “The isolation of the Rochester police department is a problem,” he said.

Klofas also said the mayor and council members have to be willing to push for reform. “City government has never shown a willingness to stick its neck out on this business,” Klofas said.

Even when city officials do push, change isn’t guaranteed, thanks to protections provided by state law and the police union contract – and the solidarity that exists in a police department.

Former Rochester Mayor Bill Johnson cited several times when he was troubled by police officers’ actions but couldn’t get much information about those incidents. “Even if you are a diligent mayor,” Johnson said, “you get pushed off.”

Proponents of a Police Accountability Board say only an independent, outside agency can bring about the changes that are needed.

To Johnson, one answer is repeal of a part of the state’s civil rights law known as Section 50-a. The law stipulates that personnel records of police, correction officers, and professional firefighters – records that “are used to evaluate performance toward continued employment or promotion” – are confidential.

That law, Johnson said, undermines the mayor’s authority over police, authority the mayor has with all other city employees. As a result, few people outside of the police department get information about the conduct of individual police officers. Even the mayor gets limited information, Johnson said.

“I’m not in any way minimizing the dangers police officers face,” Johnson said. But, he said, “The cards can’t be stacked on the side of the police union.”

Police reform proponents have objected to Section 50-a for years, but the legislature has never been willing to overturn it. Bills to repeal 50-a were introduced in both the state Senate and Assembly during this past legislative session and are still being held in committee.

Johnson said he thinks the time for change may have come, because of the frequent allegations of police misconduct in Rochester and nationally. And the state legislature, he noted, is much less conservative than it has been in the past.

But, Johnson said, change will require broad support around the state. Rochester officials, he said, will need to go with representatives of other cities and tell state legislators that they need more tools to hold police officers accountable.

“I wouldn’t be just sitting on my hands,” Johnson said. “I would be trying to mobilize forces in the legislature. I would be really driving this point home in Albany.”