For more information, including the address, email poetryandpienight@gmail.com

You can also check out its Facebook page at facebook.com/PoetryPieNight

Each event starts at 7 p.m., with a writing workshop open to the public at 6 p.m.

Rochester is the Land of 1,000 Potlucks — a place where a commitment to art and a passion for fostering community are inextricably linked. On a warm evening in early July, a pie-centric potluck transpired in the city. In the hosts' backyard, a table held several different pies — most of them homemade — brought by the guests. Several rows of pews, purchased from the Spiritualist Church of Divine Love, faced the back porch of the house, which was used as the stage. On the porch was a Methodist pulpit recovered from a barn, and in front of this pulpit, a placard advertises poems for sale from various genres. A love poem would set you back the most, at $100, while a "broken heart" poem cost only $5. "Anger sonnets" were $35. This is the odd, yet familial, setting of Poetry & Pie Night, a regular event hosted by local poets and life partners Rachel McKibbens and Jacob Rakovan.

The monthly poetry showcase, which features professional, national poets — primarily women, writers of color, and members of the LGBT community — functions off of donations from those who attend the event. There are two featured poets per evening, each of whom recite their works for 30 to 45 minutes. Occasionally, local poets will open for the headlining guests, but most of the voices heard at Poetry & Pie are new to Rochester audiences. 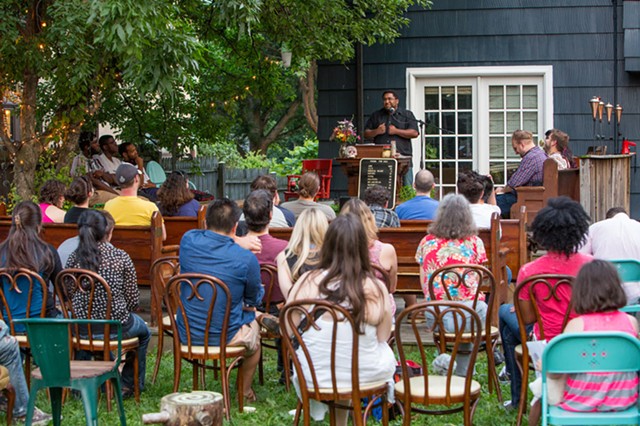 To start every Poetry & Pie, two of McKibbens and Rakovan's children — Clementine and Lulu — share their latest visual creations, which are then sold after the performance for $1 each, alongside the other poets' merchandise. "We're still gonna have a second-grader open for your ass," McKibbens says. "I don't care what magazines you were published in. My child will read her drawing of a poem, and will make maybe more money if you don't act right."

Accomplished writers accustomed to the fast-paced world of slam poetry in New York City, McKibbens and Rakovan found a gaping hole in the Rochester community upon moving to the area in the early part of the 2010's. The only events available to local poets interested in sharing their work were structureless open mics and $150-a-head poetry functions hosted by prominent presses.

"In the community, that's not doing the work that we need to do as writers," Rakovan says. "And so, the need was to create this space that was accessible, that was available to people, that had no barrier to entry, right? You can walk in, whatever. There's no money at the door, there's nothing. You can come with nothing in your pocket and you can interact with artists and art."

The poets featured at Poetry & Pie Night — only three white men have recited their works there during the event's four-year run — frequently touch on controversial sociopolitical issues. Sometimes two issues are tackled at once, as in Andrea Gibson's poem "A Letter to White Queers, a Letter to Myself," which brought me to tears upon hearing the poet recite it at a Poetry & Pie in April.

In the poem, Gibson juxtaposes the profound sadness felt by the LGBT community at the murder of Matthew Shepard in 1998, while the gruesome murder of James Byrd Jr., a black man, just four months before went unnoticed by that same community.

Later in the work, Gibson ties in recent injustices against black people in America, saying, "White is having all of Eric Garner's air in your lungs. No matter how queer you are ... And that means our breath is not ours to hold. That means our exhale is owed to mercy, to the riot of our unowned hearts, to the promise that who we weep and fight and tear down the sun for will not only be our own faces in the mirror."

Scott Woods, a black poet featured during the July 11 edition of Poetry & Pie, shared a similarly gut-checking poem about overcoming racial stereotypes that are self-righteous but full of good intentions, entitled "What I Know About Chicken That You Do Not," which also goes by the alternate title, "To The White Woman Who Thought My Saying I Wanted Chicken Meant I Want Her Opinion."

"We live in interesting times, and as a black poet, it's incumbent upon me to reflect the time that I'm in, more than usual," Woods says. "I felt like this crowd, these are people who are here not under the caprice of poetry, so to speak. They're not poets, they're not waiting for their turn to get up. They're just kind of here to see what happens."

If there is a recurring theme in the poetry uttered for those listeners with eager ears and open hearts, it is this: That is what you thought I was. This is who I really am. And while those in the audience are frequently left challenged to their core, the poets walk away changed as well.

"I've heard every poet who's come here say, 'I did work I don't ordinarily do,'" McKibbens says of the Poetry & Pie performances. "I think it's still very necessary to have a space that lets the poet understand that not only is their work valued, but there's just no f***ing room for ridicule." 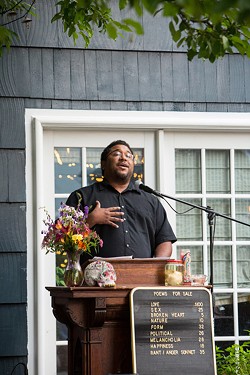 According to Rakovan, Poetry & Pie gives the touring writers the audience they truly need. "It's not just that we're giving the poets to Rochester, but we're giving Rochester to the poets," he says. "I think that you get that. You get that moment where you get to have a f***in' audience of real, living humans that are not writers, that want to hear work that matters. And that is a beautiful experience."

McKibbens and Rakovan have the credentials to back up their standing as Poetry & Pie's curators. McKibbens has competed in the National Poetry Slam nine times and her work has been published in The American Poetry Journal, The Los Angeles Review, World Literature Today. Rakovan is a National Endowment for the Arts grant winner and was a New York Foundation for the Arts Fellow in Poetry in 2011.

For all their accolades, McKibbens and Rakovan are highly personable and engaging — a scintillating blend of intelligence and righteous rebellion. Their language can be brash, but it is always used in the service of connecting people and creating community.

It is this desire to bring people together who were otherwise isolated and alienated that birthed Pink Door, a week-long summer writing workshop and retreat from which Poetry & Pie Night emerged.

Rakovan sees the annual retreat as an answer to the lack of a safe and supportive network for female poets who wanted to tour but could not in the way that male writers could without apprehension.

"I was getting really tired of just the ways in which the male voice is the predominant voice in the literary scenes all throughout New York," McKibbens says. "And so, just on a whim I had decided, 'You know, wouldn't it be cool if we just get all these women from all over the country to come in and we do some sort of writing retreat?'"

McKibbens had been on the road for nine weeks as a touring poet with a friend. During this time, young women writers would relate to her accounts of censorship, in which writing about childbirth, menstruation, and the female anatomy was ill-advised. "It leveled me in a way where I thought, 'The only way to respond is to be the anti-that," McKibbens says. "So I went on Facebook and said, 'How many of you women would like to come over to my house, five days, and write?' And I had, I think, 178 responses, within an hour."

An online brainstorming session for the retreat ensued that was frank, irreverent, and liberating — essentially, quintessential McKibbens and Rakovan.

"We were like, 'I know we wanna have panel discussions, we wanna talk about getting old, and sexuality, and trauma, and writing through that, and learning how to navigate the ways in which we are treated and believe we see ourselves and all of that,'" McKibbens says of Pink Door. "So I created this forum on Facebook, and we were all throwing out ideas, and one goes, 'It would be so great if at the end of the night, we just sat around a fire and masturbated and ate pie and read poems to each other.' And I go, 'Oh my god, we can call it Poetry & Pie Night. At the end of our hard day's work of writing...writing...writing...writing workshops...writing workshops by poets from all across the country, if at night we celebrated our own voices by having this thing, it'd be great.'" 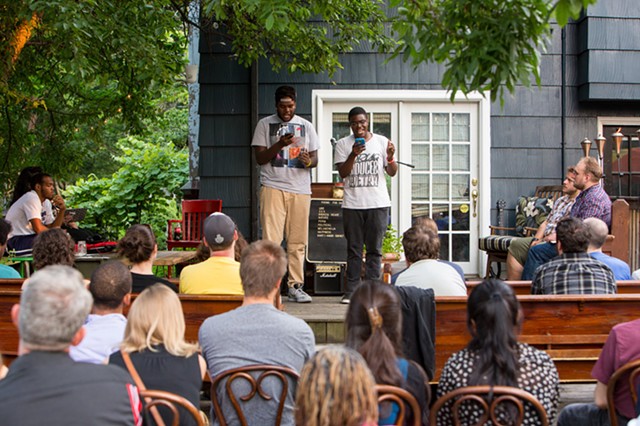 "But it seemed ridiculous to not open to the public," Rakovan says. "To have these writers from all over America, to have them in the yard and read poems to each other — why not say, 'You can come'?"

Having just surpassed the four-year anniversary of Poetry & Pie, this month's iteration on Friday, August 28, and Saturday, August 29, will coincide with a smaller version of Pink Door affectionately called Pink Cupboard, which will be open exclusively to non-Caucasian women.

"It's just really vital right now for specifically women of color to feel heard and to be given the platform to speak their minds, to write through their traumas and their smothered joys," McKibbens says. "It's really important for them to have the space."

The annual retreat is not just a place for women to hone their craft, but also to address the underlying psychological and emotional issues that can enable them to find their voice. McKibbens plans rituals that can be intense and disarming. In the second year of Pink Door, she asked the participants to engage in hand-holding in conjunction with prolonged silences, which are interrupted by the mantra, "You are an important person and your writing is necessary," to which the women responded, "I know."

"It dismantled them in ways that — you can't explain unless you know, unless you've been catcalled, unless you've been reduced to your body parts over and over again," McKibbens says. In another activity at the retreat, women who feel they did not have a childhood are given the opportunity to hit a bear piñata filled with fairy tale fragments which the women are then tasked with reconstructing as a way of reclaiming their lost youth. 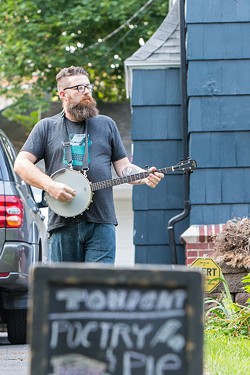 A particularly poignant moment from this exercise resonates with McKibbens: "One woman said, 'I just want you to know, when I was out there and I was hitting the bear, it was my uncle when he came into my room and when he turned off the light, and I just kept hitting him and hitting him until he left my room and he left my body. He couldn't touch me anymore!'"

Even as Poetry & Pie Night continues in full force at McKibbens and Rakovan's home, the plan is to eventually take the series on the road and expand to include pop-up events in other towns and cities. But the ultimate goal remains the same.

"What we wanna do, still, is constantly see new faces in the audience," McKibbens says. "Fifty to 60 percent regulars, the rest is word of mouth ... We always close our newsletters with, 'Please come and bring an intelligent friend.' And we don't mean it's someone who has to be academically buff. Actually not. Someone who's willing to take in a story of a gay Asian man coming out and being slapped by his mother, and slapping her back, and hearing that and receiving that in a way that makes you suddenly identify with, not just your heart, but this other body in the same space as you."