Oral performance is at the heart of poetry. The concision, style, rhythm, and emotion of the genre mixes onstage with the passion of multi-generational poets who band together to celebrate its beauty.

For Rochester writers and storytellers, poetry groups and performance nights offer an outlet to share their work and a way to learn and improve among a group. As poets prepare for a season of literary magazine submissions and poetry slams, these groups are where they can sharpen their work and urge on other writers — young, up-and-coming, or experienced.

CITY spoke to a few of Rochester's poets and storytellers about these groups and how they're shaping the city's poetry scene.

Open to high school students ages 13 to 19, Breathing Fire is a teen poetry slam group hosted and mentored by the Roc Bottom Slam Team. The bi-weekly gatherings at Press Coffee Bar offer a poetry workshop, open mic, and a slam. For these teens, the art of performing takes intense practice, and the qualifications are high for finalists to the group's Grand Slam (its last event of the season; held this year on April 7). Breathing Fire each year also sends a team of its stand-out poets to Brave New Voices International Youth Poetry Slam Festival (held this year on July 19-22).

One young poet, Alyssa Memmott, says young perspectives in poetry are important for both literature and the poets themselves. Breathing Fire, she says, gave her the perfect environment: "By getting youth involvement, it allows us to learn more about other people, and use it to create more positive human interactions."

The group's 2016-17 season is almost over. But more information can be found on Writers & Books' website, wab.org.

Collaboration after collaboration, Just Poets is a group dedicated to an open environment and open mics. Many young graduates, undergraduates, professors — and occasionally high school students at the open mics — have found solace in the company of Just Poets.

Performance, Just Poets President Bart White says, is an important aspect of poetry, but he understands the need for "quiet poems" as well. Different voices, and different styles are representative of what his group is about.

Just Poets has recently collaborated with the Gay Alliance of the Genesee Valley for a series of poetry workshops, InQueery, which continues April 4, April 18, and May 16 at the Gay Alliance LGBTQ Resource Center (100 College Avenue).

Just Poets hosts a regular open mic night on the second Wednesday of each month at Before Your Quiet Eyes, 439 Monroe Avenue. The group also hosts periodic readings and events. More information can be found on its website at justpoetsinc.org.

Rachel McKibbens calls the unapologetic night of performances hosted by herself and Jacob Rakovan "a revolutionary poetry speakeasy with pie." Poetry & Pie Night is a monthly showcase of minority writers and readers that explores LGBTQ, people of color, female, and working class narratives in poetry while, of course, offering a little pie. Both McKibbens and Rakovan come from the spoken word world of poetry, and regularly host workshops to craft, shape, and mold the skills of performance and writing.

Poetry & Pie Night is as simple as its title: reading and writing poetry, and eating pie. For more details and info about future dates and the location, email poetryandpienight@gmail.com.

This group of competitive poets and spoken word performers travel around Rochester and beyond to perform for — as well as teach — all who will listen. The adult slam team came together in 2013, and now features nine members — talented poets who have proven their skill and dedication.

As mentors to Breathing Fire, and collaborators with Just Poets, Roc Bottom is constantly creating new content, and expanding its platforms. Its performances are always fresh.

The Roc Bottom Slam Team hosts performances, workshops, and other events in various locations around Rochester as well as a monthly show at The French Quarter (130 Spring Street), which usually has an open mic at the beginning. Keep track of the team at facebook.com/RocBottomSlamTeam. 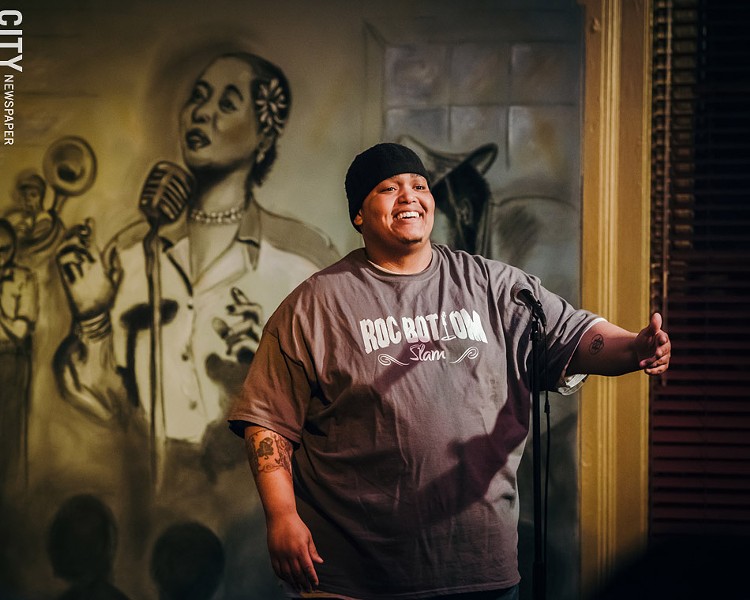 Rochester Poets is one of the oldest literary organizations in Western New York. The message and support it gives to local writers hasn't changed much since its creation in 1922, but the group consistently seeks out new voices to keep up its contemporary standards. Month after month, the group gathers to recollect, revisit, or introduce new poets to the scene.

Rochester Poets — which had a great presence in the local "100 Thousand Poets for Change" and "Poets Against the War" events, according to the group's president, Frank Judge — has been active in spreading a message for global unity, and invites poets at its monthly gatherings to do the same.

The group's open mics and visitor readings, held on the third Sunday of each month, have regularly hopped around Rochester, so check the Rochester Poets Facebook page or email rochesterpoets@gmail.com for event information.

For those trying to squeeze a love of writing into their packed schedule, Writers, Ink. gives young professionals an environment where they can get that little push of creativity. Huddling together in Writers & Books, 20- and 30-something voices can gather to focus on writing, reaching small goals meeting-after-meeting, and greeting new faces when they come along. "Our support for each other is multi-faceted and unconditional, and that does wonders for providing an environment to grow as a writer," says Sarah Brown, one of the group's organizers.

Unlike some of the other groups in this article, Writers, Ink. doesn't focus on oral performance, but those writing poetry, fiction, and other styles are always welcome. For some, writing is a hobby; for those at Writers, Ink., it's a source of joy and an outlet to relieve stress.

Before Brown and her W&B coworker, Emma Lynge, brought this group to life, the two found that writing needed some appreciation in their own lives. "This notion of me as a writer was crumbling; I was lost," Brown says. "Writers, Ink. means I'm still a writer. To me, that is everything."

Writers, Ink. meets on Mondays, 6 p.m., at Writers & Books, 740 University Avenue. It's a 21 and older event. For more information, email Sarah Brown at sarahb@wab.org, or check out wab.org.