Playing misty for us (again) 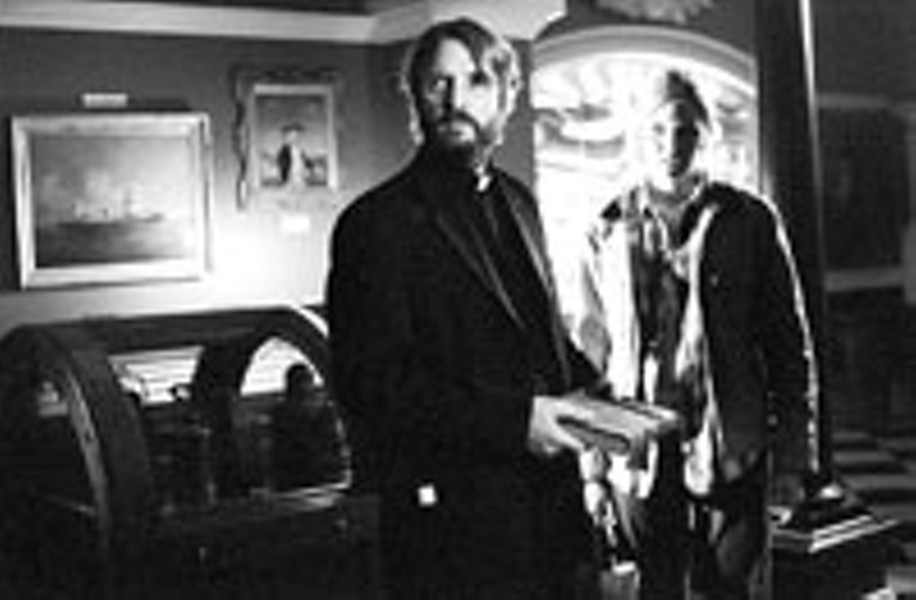 Columbia Pictures The sins of the fathers: Adrian Hough and Maggie Grace in "The Fog."

The new remake of John Carpenter's 1980 horror flick, The Fog, demonstrates once again the routine self plagiarism that provides so much of the film industry's contemporary product, as well as the questionable practice of repeating a movie with no other apparent motive beyond profit.

The original, a deftly crafted, efficiently scary, and intelligently reasoned work, helped establish the director as one of the premier horror masters in American film. The new version, which in fairness displays the typical Hollywood polish, follows the original with a good deal of fidelity, but neither transforms nor particularly improves on Carpenter's vision, naturally inspiring the inevitable and perhaps unanswerable question: Why make the movie in the first place?

Apparently because of the success of his earlier Halloween, which quickly became something of a classic of its kind, Carpenter received a good deal more money to make The Fog, a much slicker, more ambitious, and obviously more expensive work. The picture featured not only a prologue in the form of a history lesson from no less than John Houseman, but also a supporting cast that included Hal Holbrook and a brief appearance by Janet Leigh. More important, it employed not one but two attractive young women who both achieved great success as major scream queens of their era --- Jamie Lee Curtis (Janet Leigh's daughter) and Adrienne Barbeau.

The new version incorporates just about all of the elements of the original, but looks pretty much like a simply more lavish and slightly less rigorous exercise in horror. Once again a huge and impenetrable fog bank drifts over a remote seaside town, this time on an island in the Northwest, penetrating every domicile and transporting inside it a collection of mysterious, spectral figures from the past, apparently determined to destroy both the town of Antonio Bay and its citizens. Through numerous flashbacks and several discussions of regional history, the movie informs the audience that the mysterious figures are victims of a terrible betrayal who perished on a clipper ship, the Elizabeth Dane, burned and sunk by four men who absconded with a chest full of gold back in the 19th century.

As in most horror films, the motives for the ghostly assault on the citizens of Antonio Bay derive from guilt, inherited in this instance from their ancestors, the town's founding fathers, who also happen to be the thieves and murderers who sank the ship. Not coincidentally, the leading citizens plan to unveil a statue of those men, the men who established the town back in 1871; the ghost ship and its frightening passengers show up just in time for the ceremony. Naturally, the appearance of the uninvited guests tends to spoil the whole celebration for everybody.

The filmmakers succeed relatively well at establishing the contrasts in atmosphere that account for much of the picture's suspense and fright. The lovely seaside town, the authentic docks and boats, the stunning landscape of the Northwest coast initially appear inappropriate for the ghostly visitors, who tend to ruin everybody's day, indeed a good many lives.

In the usual manner of the horror film, beautiful settings simply cry out for some terrible intrusion and humdrum activities invite dreadful shocks --- a bloody slaughter in the midst of a party, a skeletal hand thrusting up from the drain when a character washes the supper dishes --- and normal human relationships lapse into chaos and meaninglessness.

Like its predecessor, The Fog depends upon the ancient notion of the ghost as a symbol of the past, the spirit of the dead returning to revenge some awful wrong. In the movie's Old Testament morality the chief victims --- and by extension all the inhabitants of Antonio Bay, whatever their innocence --- inherit the guilt of the past. The sins of the fathers, as the drunken priest reminds them, pass down to their children.

The remake retains and even intensifies one theme of the original, that the ghosts who come in the fog to inflict retribution on the descendants of their murderers make no distinction between the guilty and the innocent. They haunt every house, pursue every person, and cause their victims to suffer the terrible, unforgiving logic of the genre.