It's a plastic planet

We need to change that

Jacalyn Meyvis can't pinpoint the exact moment where she decided to start reducing the amount of disposable stuff she consumed in her daily life, particularly products made from plastic. But as a big water drinker, her first step was to trade the bottled water she grabbed from store shelves for a reusable bottle filled with tap water.

Now, she buys bamboo-handled toothbrushes instead of plastic ones; she carries a bamboo flatware set in her car so she doesn't have to resort to plastic utensils; she switched from disposable razors to a safety razor; she takes reusable bags to stores; and she uses cotton sacks in place of sandwich and snack bags.

"You just start realizing more and more all the other things you can start incorporating into your life," says Meyvis, who lives in Webster.

Plastics are everywhere. They're used to make everything from grocery bags and clothing to medical devices and military body armor. And there are reasons for its popularity. Plastics are comparatively inexpensive to make and work with, they're durable, they resist harsh chemicals, and they're lighter than other materials.

But the more pervasive they've become, the more troublesome they've become. A boom in single-use and disposable plastic products has given way to plastic pollution. Bottles line roadsides, shopping bags flap around in trees, and cigarette butts litter beaches, parks, and sidewalks.

And scientists have found concentrations of tiny plastic particles — microplastics and nanoplastics – in all of the Great Lakes and in the deepest reaches of the world's largest oceans. Teams led by SUNY Fredonia chemistry professor Sam Mason have also found microplastics in tap and bottled water samples from across the world.

Researchers say these microplastics pose potentially serious risks in aquatic environments because they leach toxic chemicals into the water and get eaten or ingested by species across food webs.

"It's hard to point to specific negative effects that they directly cause," says Matt Hoffman, an associate professor in RIT's School of Mathematical Science who modeled the flow of plastic pollution in the Great Lakes. "You can sort of speculate on potential impacts, but the right studies haven't really been done yet."

For Earth Day this year, which is April 22, the Earth Day Network is focusing on plastic pollution. The organization, which leads Earth Day campaigns and events across the world, is pushing for increased corporate responsibility around plastics and for a global framework to regulate plastic pollution. But it's also encouraging people to cut their own use of plastics.

Meyvis is keenly aware of plastic's omnipresence. She lives near Webster Park and has helped with waterfront cleanups there. A photographer, she's been working with fellow photographer Arleen Thaler on "Plastics: Our Weakness," Thaler's ongoing documentary photography project about plastic waste.

And the more the more plastic she sees strewn around, the more she's determined to cut down on her own waste.

Monroe County generates 100,000 tons of plastic waste a year, which accounts for 14 percent of the county's everyday waste. So says a 2010 estimate from the county government, the most recent one it has.

Most of that plastic gets thrown away and sent to landfills. That 2010 survey found that only 7.75 percent – roughly 8,000 tons – was diverted from landfills, primarily for recycling. Those figures predate the county's plastic recycling expansion and its implementation of single-stream recycling, both of which were expected to improve diversion rates.

But those changes may not have led to a decrease in the amount of plastic going to landfills in Monroe County. Plastic continues to be an ever-increasing part of the waste stream, says Luann Meyers, Monroe County's solid waste coordinator. And it's safe to say that means more plastic waste is landfill-bound, she says.

"We live in a disposable society to an extent, you know," Meyers says. "We want things that are single use, and a lot of times, those single-use things are made out of plastic."

Companies play a sort of shell game with many of these products. They tout that the goods are made out of recyclable plastic, but the claim ends of being truer on paper than it is in practice.

Meyers uses the example of single-use coffee pods, aka K-Cups, which have become crazy popular. They are made out of recyclable plastic, but chucking them in the recycling bin is essentially useless, since they're too small for the county's sorting machines to catch. Plastic flatware has the same problem.

On the flipside, there are some easy ways to make sure more plastic gets recycled. Contrary to what a lot of people were taught in recycling's early days, bottle caps are recyclable. They just need to be screwed on to a bottle so that the sorting machine catches them, Meyers says.

Plastic bags are also recyclable, but don't put them in curbside bins, even if they have a number and the "chasing arrows" sign on them. They get tangled in the county's sorting machines, which aren't designed to process so-called film plastics, a category that also includes the plastic wrapping on things such as paper towels.

Globally, more than 60 percent of the plastics that have ever been produced have been discarded and are either sitting in landfills or accumulating in natural environments, according to a high-profile scientific study released last year. The authors were Roland Geyer from University of California Santa Barbara's School of Environmental Science and Management; Jenna Jambeck from University of Georgia's College of Engineering; and Kara Lavender Law of the Sea Education Association in Woods Hole, Massachusetts.

Plastic's tendency to "accumulate in the environment," as the authors put it, has long captured the attention of scientists and environmentalists, but now it's starting to resonate with the general public and policy-makers. Those concerns helped push a federal ban on plastic microbeads in cosmetics and personal care products into law.

RIT's Hoffman began building his model of plastics flows in the Great Lakes to help answer questions about whether the lakes have a garbage patch similar to the swirling mass of plastics in the Pacific Ocean. The model showed there wasn't one, but it helped better characterize the nature of plastics pollution in the lakes.

Using the complex model, he was able to calculate that 10,000 tons of plastic enter the Great Lakes every year. And he was able to show how the plastics move around. They move from Chicago to the shores of Michigan, for example. And in Lake Ontario, they drift over to the south shore – the US side – from metropolitan Toronto.

Plastics get into the lakes and other waterways a few ways, he says. Some of it is litter that gets blown around until it lands in a stream or lake. Until they were banned, microbeads entered through municipal wastewater systems. Now, miniscule fibers from synthetic textiles are washing into the water the same way.

"It's hard to clean," Hoffman says, "once it gets in there. It's hard to get out. So it really does come down to having less of it in there in the first place."

So what can anyone do about it? A lot, it turns out.

It helps to think about the three R's that have been hammered into our conscious: reduce, reuse, recycle. And the folks at the Earth Day Network have two more R's to add into the hierarchy: refuse and remove.

The best way to reduce plastic waste is avoid generating it in the first place, which is what Meyvis and others like her are trying to do. Anyone can find ways to substitute reusable products for disposable, plastic ones. Even replacing plastic food storage bags with reusable plastic containers – which are recyclable when they are no longer usable – is an improvement.

Environmental groups in New York are pushing for the state to enact a ban on single-use plastic shopping bags, and they could use some grassroots support. But even if political action – or a bag ban – isn't appealing, taking reusable bags to the grocery store and using them in place of single-use bags is a very simple thing most shoppers can do. Places such as Wegmans and Target even sell reusable bags in their stores.

Activists also stress the importance of refusing needless plastic items. They suggest turning down straws or plastic utensils at restaurants and bringing your own reusable ones, for example. 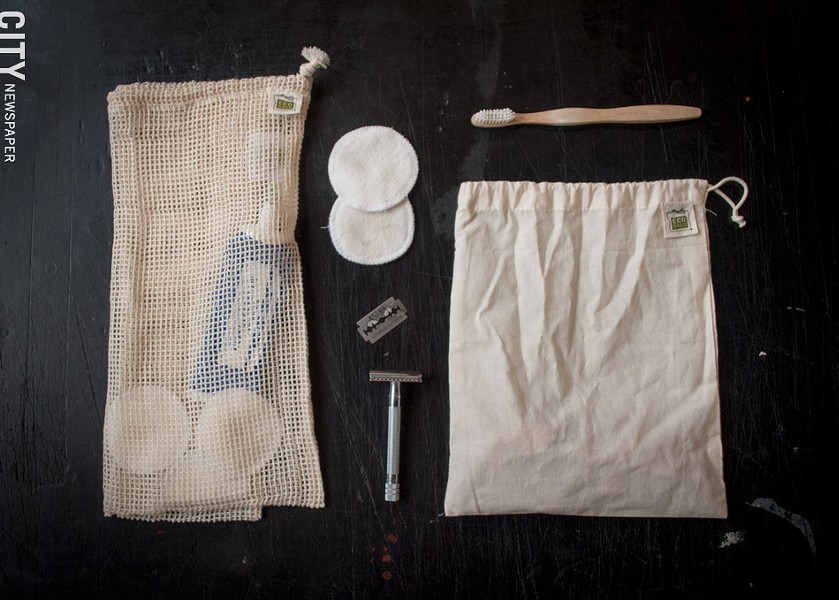 Purchasing decisions also matter when it comes to reducing plastic waste. Look for products that have less plastic packaging; buy an unbagged head of lettuce instead of a bag or plastic container of it, for example. Some grocery stores will let you bring in and use containers such as mason jars for bulk section purchases; Abundance on South Avenue encourages it. And anti-plastic pollution advocates suggest buying clothing made from natural fibers instead of garments made with polyester or nylon.

Plastics recycling is something most Monroe County residents need to do better; the county's data show that we're diverting a small portion of plastics out of landfills. Details on what can be put at the curb and what can be recycled at the county's Ecopark are available at www.monroecounty.gov/ecopark.

These steps may sound like a lot, but they are entirely doable and practical. For Meyvis, replacing disposable products with reusable ones and thinking about what happens to things when she's done with them has become a mindset that drives her forward. And she continues looking for new ways she can cut down on her waste; she likes Larabars, and she's trying to figure out what to do about the wrappers, though she knows the ideal solution is probably to make her own granola bars.

Some of her friends are also going through the same process, so they exchange tips, ideas, and product recommendations, she says.

Looking for some help in cutting your plastic waste?
Have some questions about recycling in Monroe County?
Here are some links that might help:

Trash is for Tossers was started by Lauren Singer, a New York City resident, to document her “zero waste journey.” It’s introspective and instructive.
www.trashisfortossers.com

This post may be especially helpful for anyone just starting out.
http://trashisfortossers.com/a-beginners-guide-to-zero-waste-living-ps-it-doesnt-happen-overnight/

Be Zero is a Colorado-based organization that runs outreach and education programs about waste reduction. But its website also offers some useful guidance and resources for living a lower-waste life.
www.bezero.org

The Earth Day Network’s website has a section for its campaign to end plastic pollution, which includes a downloadable toolkit.
www.earthday.org/stop-using-disposable-plastic/

Monroe County’s Ecopark is a drop-off point for recycling and household hazardous waste products. Among the items it collects for recycling: plastic bags, plastic product wrap, and large plastic items such as deck chairs.
www.monroecounty.gov/ecopark/