Plaseebo plays with the macabre

Bob Conge has been collecting vintage toys for 50 years. They fill the barn attached to his 1840's farm house on a Wayland, New York, property that also includes a cemetery and a collection of 1950's and 60's robots. And he says he's got a certain fondness for ghosts.

All of these aesthetics inform the one-of-a-kind, designer vinyl art toys he creates and sells, sometimes in collaboration with other artists who are based around the world, such as Eric B of Krotpong Industries. Each piece, which might contain elements of monsters, ghouls, ferocious animals, humanoids, or pop-cultural references, fetch from between a couple hundred bucks to thousands. They're meant to be collected art pieces, not toys for kids.

When Conge started his company, Plaseebo, 10 years ago, "it was intended to be the name of my studio for small sculpture, which would enable me to have production collaborations with other folks," he says.

Collaborating with other designers, sculptors, and customizers is one of the most rewarding aspects of this genre, Conge says. The Internet, and the fact that their work exists in the visual realm, has made cross-continental collaboration a smooth process. "We need not even have a common language — many of the folks I work with in Japan and China speak only broken English, and worse, I speak neither of theirs," he says.

Conge or another artist will begin by sending blank, unpainted pieces of their respective figures to each other to be painted or customized. "Or we may each sculpt various parts of the same figure to be produced in vinyl or resin," he says. "Each of us are encouraged to freely contribute as we wish without restriction."

And Conge gives many of the toys backstories — flights of fancy that explore the imaginative origins of each piece — which you can read on the "backstories" section of his site.

Some of these stories are short and playful, such as the ditty about the "Jumping Brain and the Brainrider" a part-bullfrog beast eager to join a rodeo (as the bull, of course), a mount in search of his match. But other toys and their tales contain more serious details. "They often loosely take the form of fables or cautionary tales based on my concerns for what ails our society," Conge says.

For example, in "The Atomic Chicken," Conge spins a critical yarn about shortsighted-parents giving their kids unsuitable pets, who are discarded when they're no longer cute. Then his imagination runs ruthlessly toward a dystopian vengeance. In "Journey of the Stone Walker," Conge rewrites history, and with the help of a mighty, mystical being, he envisions a different outcome of the Spanish invasion of Native American lands.

But sometimes titles are enough to make a point. "War Masquerades as Innocence," a hand-cast resin toy, is a monstrous union of a tank and a skull with mechanical elements, hiding its grimace behind a baby doll mask. The piece is painted with sickly acidic hues, contrasting sharply with the innocuous flesh mask it's hiding behind.

Conge has even developed a rather magical, overarching story that parallels himself and his creation of toys: In the tale of "The Misfits," Walter trawls flea markets for broken toys abandoned by children throughout previous decades.

He "rarely paid more than 10 or 15 cents apiece for the ravaged figures, as most were missing limbs or heads," Conge writes. "These were much more than idols made of plastic and vinyl, for Walter could feel the spirits and hear the distant laughter of the many children who had once worshiped these love-worn toys. To him, these toys were markers in lives unfolding, indelibly printed with the character of those who had played with them so many years ago."

This past winter, Conge says, Walter began working on his Geppetto project. "He hoped to design a system to capture the psychic energy he felt being released from the old toys and use it to power the robot toy he was building," he says.

All of the "Misfit" series figures live in the same backstory as various examples of some of the pieces being made by Walter and the children. These include "Mickeybaby Misfit," a vinyl figure assembled from a baby doll head, mouse ears, mismatched eyes, and a robotic-looking torso and legs.

The head is painted teal, and the body chamber is filled with a mix of slowly moving gel colors and shapes that are back-lit when the color-changing LED unit is switched on. Rusty-toned paint drips from various rivets and other features, bringing Oz's Tin Man to mind. 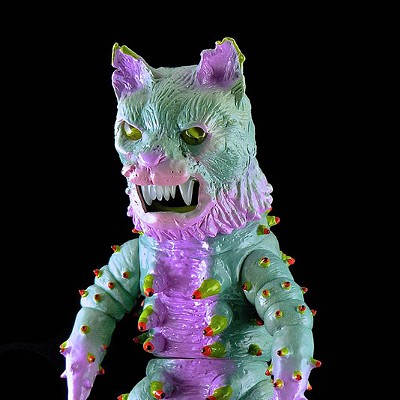