April 03, 2018
The proposal for new apartment buildings on land within Cobbs Hill Park took a step forward Monday when the City Planning Commission approved Rochester Management's revised plans for the project. The vote was 4-2.

The project continues to face bitter opposition and it still needs approval by City Council and Mayor Lovely Warren. 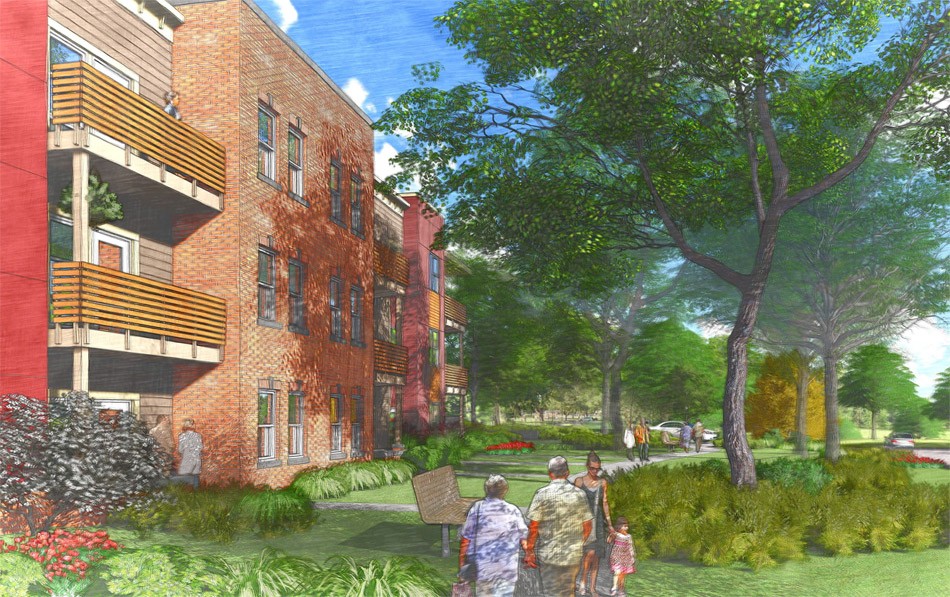 The non-profit owns and operates Cobbs Hill Village, a group of apartment buildings for low-income seniors. Arguing that the existing apartments are outdated and that repairing them would be too costly, Rochester Management began working several years ago on plans for a new development on the site. But it has faced opposition from a vocal coalition of neighborhood groups, environmentalists, and even some of its tenants, who oppose the project.

Two larger buildings would face Norris Drive and four smaller ones would be at the back of the site, near the edge of the park. The buildings have been staggered and given flat roofs, lowering the building height. Multiple walkways were added from the two main buildings to Norris Drive to give the complex a more residential appearance, and walkways were added leading to the park’s walking trails. The parking area was redesigned to more resemble a residential street between the buildings, Hill said, and benches, bike racks, and additional trees were added.

To address concerns about rates in the new development, Rochester Management CEO Peggy Hill said all tenants have received new riders to their leases, locking in their rents. And although when tenants move out, the rent in most units can be increased, Rochester Management has committed to leaving 20 units – 16 studios and four-one bedrooms – at their current low rates for the next 40 years, even after tenants move out. For instance, the studios would remain at $332, an extremely low rate for the area.

The revisions are a response to concerns raised by Planning Commission members in January, mostly around building design and placement. For instance, buildings in the earlier design were all the same height, and some Commission members said that created a wall on Norris Drive. They also wanted building materials that were more natural looking.

The commission had also recommended that the buildings closest to Norris Drive should face the street rather than internally toward a parking lot. They wanted the buildings re-positioned to provide views between them, and they wanted more sidewalks and a better sense of connectivity around the site and with the park and Norris Drive. They didn't want air-conditioning condenser units visible from the front or side of the units, and they wanted more amenities that complement the site’s proximity to the park, such bike racks and benches.

“We really tried to address the issues that the commission had with the earlier plan,” said Peggy Hill, in an interview prior to Monday’s presentation. Hill, Rochester Management’s president and CEO, presented a plan that significantly departs from the earlier version.