Pioneering record producer Ethel Gabriel gets her due in forthcoming documentary

PHOTO PROVIDED BY CAROLINE LOSNECK AND CHRISTOPH GELFAND The late Ethel Gabriel at the Rochester Presbyterian Home.
A handful of framed gold records lined the otherwise mundane hallway of the Rochester Presbyterian Home, and then on to the walls of the one-room apartment of Ethel Gabriel. She was 91 years old then, but she remembered. “How could I forget Elvis?” she said. “I made him famous.”

That was eight years ago, before dementia swept away so many memories of Elvis Presley and of the estimated 2,500-plus albums that she produced over the course of her career in the recording industry.

Gabriel’s impact on the music business has not been forgotten. In 2014, she was honored with a Special Merit Award by the Rochester Music Hall of Fame. And when Gabriel passed away quietly on March 23 at Highland Hospital — with the music of Frank Sinatra playing in the room — The New York Times and The Washington Post ran obituaries. The latter publication’s headline read, “Ethel Gabriel, trailblazing producer and executive at RCA Records, dies at 99.”

Gabriel and her legacy are the focus of a documentary-in-progress called “Living Sound,” co-directed by Maine-based filmmakers Caroline Losneck and Christoph Gelfand.

“The through line is her love of music, and her love of trying new things in order to get it out into the world and into people’s homes,” Losneck says.

Losneck and Gelfand had planned on having the documentary done in time for the centennial of Gabriel’s birth, this year, but the coronavirus pandemic brought on-camera interviews to a halt. “They’re getting up in age, frankly, themselves,” Losneck says of their interview subjects. The directors’ target date now for the completion of “Living Sound” is now Nov. 16, 2022 — what would have been Gabriel’s 101st birthday.

There may have been other women working as producers or as A&R representatives (that’s Artists and Repertoire, the people who scout for and develop artists for the label). But it seems clear that Gabriel — whose career began in 1940 — was the first woman to work in those capacities for a major label.

“She talked about that in terms of being a mentor to women in the industry, and how important that was to her, to provide that kind of guidance, in a playing field that wasn’t very level,” says Gabriel’s nephew, Ed Mauro.

Mauro moved Gabriel here from Pennsylvania. She spent the last decade of her life in Rochester, living quietly and virtually anonymously in the senior living home on Thurston Avenue, after living loud amid some of music’s biggest names.

“She has an almost Forrest Gump-like attachment to all these huge names in music history,” Gelfand says of Gabriel. Although the late prodigious music producer may not have been a household name, she frequently turns up in industry publications, notably Billboard.

Gelfand, a Rochester native, compares the process of uncovering Gabriel’s story to peeling an onion. Gelfand and Losneck started with a series of filmed interviews with Gabriel at her Rochester apartment, which then led to deeper investigations.

Losneck is a bit of a second-hand scavenger, especially when it comes to old vinyl.

“It’s really been a joy of mine, and a pleasure,” she says, “to kind of go through different cities I’m in and go into thrift shops, or even Goodwill or Salvation Armys, and start looking for Ethel’s name as a producer or A&R executive on the back of these records,” Losneck says. “And you know something? I have found my collection has grown, from one record that I was really excited to find to just this huge amount of records — many of them from the Camden line or the Living series that she did.”

Camden was RCA’s label of budget-conscious records; RCA saw it as an expendable asset when it handed control of the subsidiary over to Gabriel. But she turned into a profit monster.

It was a catalog of important music, Losneck says, “because it was affordable, it was accessible.” A major part of the Camden label was the “Living Strings” series of orchestral albums, created by Gabriel in 1959. It became a big-selling line of easy-listening records covering many musical categories, including Living Voices, Living Brass, Living Guitars, Living Marimbas, Living Jazz, and Living Organ. Your parents may have made love to “Living Strings Play Music for Romance.” There was something for everyone. 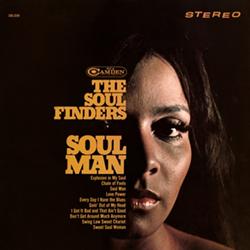 These are easily found in any dusty pile of thrift-store records. And there are many other albums with Gabriel’s name on the back. “So I have been able to find a 1968 Soul Finders record that Ethel produced, and there’s this cover of ‘Soul Man,’ Losneck says. “And then you turn around and find a Living Guitars ‘Mission Impossible’ song, also on Camden Records, produced by Ethel in the late ’60s.”

It is clear that Gabriel didn’t just fall into this. At 13, Ethel Gabriel, née Nagy, was playing trombone in her own dance band in Philadelphia. While going to school at Temple University, she landed a job as a record tester at RCA’s plant in nearby Camden, New Jersey; she would pull a new record from the line and listen for imperfections. Working her way up the RCA ladder, she was taken along to Memphis in 1955 to help sign a 20-year-old Elvis Presley. Gabriel said her job was to talk with Elvis’s mother and assure her that this would be a good move for her son. That same year, Gabriel helped bring mambo to the United States with her work on Pérez Prado’s “Cherry Pink and Apple Blossom Wine.”

She married music publisher Gus Gabriel in 1958, and the low-profile exec continued her high-profile work. In fact, when her husband was dying in a hospital in 1973, she walked into his room to discover the nurses excitedly talking; Frank Sinatra had sent them all autographed pictures.

Gabriel had a gift for repackaging. In 1975, she launched the “Pure Gold” album series of reissues and new compilations, and in 1983 won a Grammy Award for best historical album for “The Tommy Dorsey-Frank Sinatra Sessions.” Yet she was also forward looking. Near the end of her four decades in the music industry, Gabriel was working with disco and early hip-hop.

In 1984, a friend and former U.S. treasury secretary, Robert B. Anderson, persuaded Gabriel to leave her position as vice president at RCA and turn over her retirement package of a quarter-million dollars, which he said would be used to create a new record label for her. Instead, he squirreled it away in an offshore bank account. Anderson was convicted of tax fraud in 1987, and much of the money was never seen again.

Mauro says that while Gabriel had a generally optimistic attitude about working in the music industry — which she tempered with a realistic understanding of the up-and-down nature of the business — Anderson’s con game left lasting damage. “I think the thing that really hurt her, that she never recovered from, is Robert Anderson stealing all her money,” Mauro says.

Gabriel was forced to sell much of her memorabilia, including her gold records. But when Ed and Nancy Mauro brought her to Rochester to live, they convinced RCA to create reproductions of the gold records.

And there were other treasures that the Mauros had in their basement and turned over to Losneck and Gelfand for their documentary.

“Ed actually sent us this incredible recording, audio recording that he had digitized that Ethel made one night after they were out on the town in New York City,” Losneck says. “It was Ethel and her sisters — Ed Mauro at the time was like 3 years old — it was a winter night, and they went in the RCA studios and they recorded themselves singing and chatting. That stuff is gold to us: It becomes the texture of the film, it gives us this window into Ethel’s personality.”

And what comes through such a window? Listening to recorded interviews done when Gabriel was in her early 90’s, Gelfand heard the woman who calmed Elvis’ mother and turned the losing proposition of Camden Records into a gold-record mine. 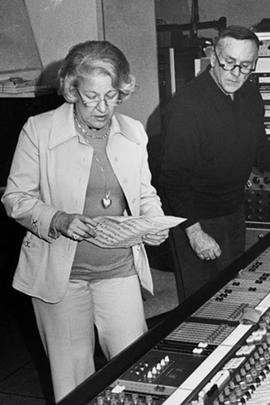 “She had a lot of spunk,” he says. “And I got the sense that while she kind of wasn’t necessarily outward with all of her feelings, she had great pride in her place in history and her place in her own company. And in the work that she was doing and her confidence in her abilities.”

It seems to have never been about anything but the music.

A woman who created gold records, and made millions for RCA, living in a one-room apartment, singing along to Elvis records.

“Sometimes it seems like women, in particular, maybe get labeled or defined in different ways by the hardships they faced,” Losneck says.

“It didn’t define or take away from all of the things that she did. As a matter of fact, it ended up her life was happy, and she told us she still had her music all in her head.”