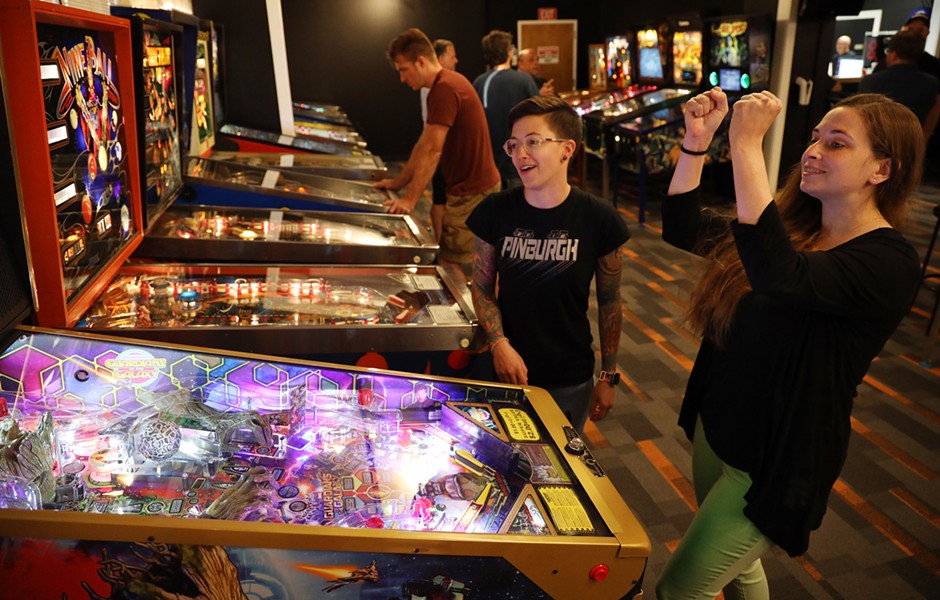 But true devotees of the silver ball around town these days are making their way to an enclave on the second floor of the sprawling Piano Works Mall on Commercial Street in East Rochester.

There, the largest selection of pinball machines in the area opened in June under the umbrella of something called the Rochester Pinball Collective — a business venture of five pinball fanatics who pooled together their private collections of more than 45 machines of various vintages into a mélange of analog pleasure in a digital world.

“Business venture” might be too ambitious a description for the collective. Turning a profit would be welcome, the collaborators said, but the real goal is giving greater Rochester a place to play a variety of machines and putting the area on the pinball map.

“There’s no money in pinball,” said Jarret Whetstone, 35, one of the collaborators, who contributed four machines to the cause. “The goal here is if we cover the rent, it’s a success. Right now, it’s something like, ‘We’ll keep the lights on.’” 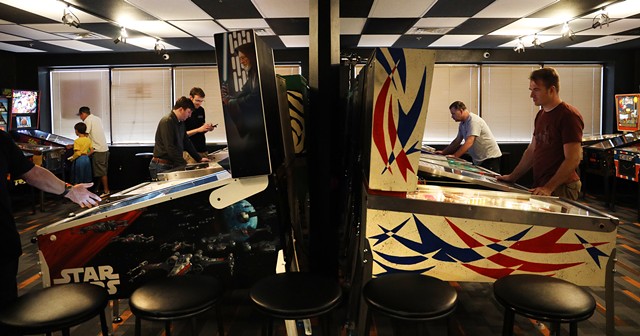 On a recent Thursday evening, the lights at RPC, as the place is known for short, were more than just on. They were flashing amid a cacophony of clacking flippers, buzzers, and bells caused by silver balls rocketing and ricocheting off blinking bumpers under glass on their playfields.

Casual players tend to view pinball as a frenzied series of random zigs and zags that are more at the mercy of luck than skill. The couple dozen players at RPC knew better.

They leaned into their machines, their fast-twitching fingers on the buttons, and intermittently coaxed the ball onto a new path with a jostle of their shoulders and hips. They had each paid a flat fee of $20 for unlimited plays for the next five hours, and they made the most of their money.

Machines from the 1970s included the tennis-themed Volley and card-shark High Hand that offered basic features such as 1,000-point bumpers and simple scoring fields that reset after 99,999 and were reminiscent of a flip alarm clock from the era.

From the following decade there was Cheetah, about an African tribe that bestowed its supernatural powers to turn ordinary stones into gems unto a baby cheetah. The game was innovative in its day in that it offered digital seven-digit scoring and gave players up to five extra balls. 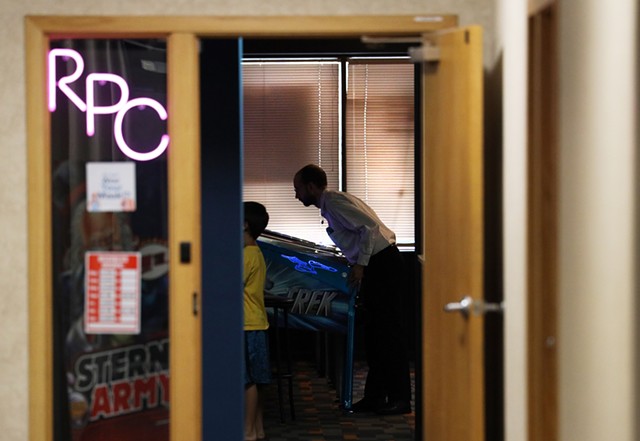 On the other side of the room was the space-based Flight 2000, one of the first “talking” pinball games of the 1980s. Competitors are told to “Prepare for mission” with the pull of the plunger and can play multiple balls at once.

Among the more modern machines was one devoted, curiously, to “The Munsters,” the 1960s sitcom about a family of benign monsters living in suburbia. The game, produced by Stern Pinball two years ago, has elaborate computerized graphics and distinctive hand-drawn art.

The collaborators behind RPC — all of them men who make their livings as engineers or computer programmers — figure theirs is the second biggest pinball arcade in New York, trailing only that at Pocketeer Billiards in Buffalo, which boasts more than 80 pinball machines.

Despite its quiet opening and limited hours of operation on Thursday and Saturday evenings, RPC has drawn pinball aficionados from across the state and beyond. In July, it hosted an exhibition tournament that lured the International Flipper Pinball Association’s top-ranked player in the world — Raymond Davidson, who lives in the Chicago area and is a software engineer at Stern Pinball.

But RPC appeals to more than the avid pinballer. Everyday adults for whom pinball is nothing more than a shot-and-a-beer diversion will find nostalgia, while younger visitors who have never known gaming to mean interacting with other humans in public will find a revelation. 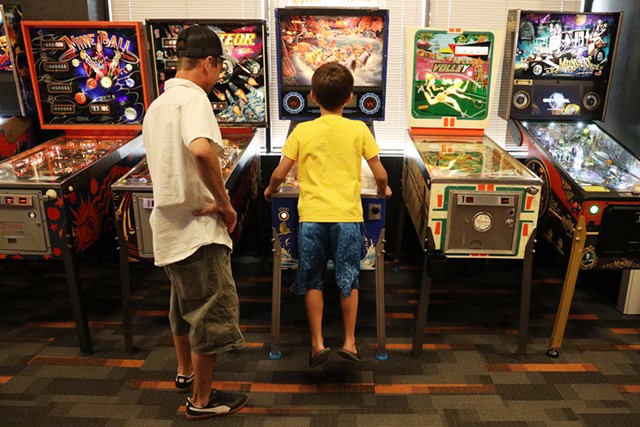 “There’s a tactile immersive experience to it that’s slightly different from video games and you’re kind of always testing yourself,” said Stephanie Guida, 29, of Scottsville, who was there for the Thursday league night. “Sometimes the ball will do something completely unexpected, or you’ll manage to make a crazy save, and the feeling when you manage to save something from out of the blue, it’s second to none.”

About half the machines at RPC belong to Bruce Nightingale, 49, who many in the scene regard as the pinball guru of greater Rochester. The International Flipper Pinball Association has Nightingale ranked 906th in the world out of nearly 79,000 players.

Nightingale bought his first pinball machine at the age of 13, when he paid $350 for a glam rock band KISS game, and estimates he has owned more than 300 machines over his lifetime.

“I’m so crazy that I actually built a dumbwaiter in my house to bring the games up and down,” Nightingale said.

Rochester Pinball Collective is an outgrowth of a previous side gig of Nightingale’s called The Silverball Saloon, a former bar in East Rochester that housed most of his personal collection of games and hosted International Flipper Pinball Association events, like the Upstate New York Pinball Championships.

It was there that most of the collaborators of RPC discovered their interest in pinball. When the pandemic forced Nightingale and his wife, Kat, to close Silverball last August, he and some regulars began brainstorming ways to showcase their collections again. 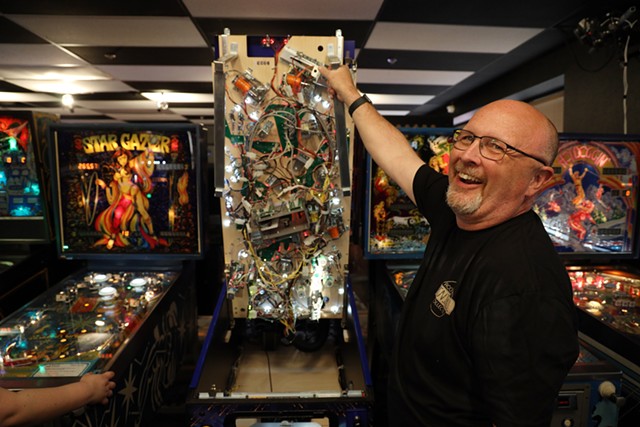 Rochester Pinball Collective was the answer, and what Nightingale, an engineer at Corning, called an even better incarnation of his “dream” of owning a pinball bar.

“I don’t have to deal with the State Liquor Authority,” Nightingale said, only half-joking.

The modern pinball machine is a product of the Great Depression, and some of its key features were developed in Rochester.

Industry historians generally regard “Ballyhoo,” a table top game introduced in 1931 by the Bally Manufacturing Corp., as the first pinball game, although it bore little resemblance to the machines of today. There were no flippers or bumpers, but players were required to guide metal balls through a maze of pins surrounding multiple holes, each worth between 100 and 500 points.

A year later, however, Howard Peo of Rochester introduced what was to become the biggest selling countertop game of all time in “Whirlwind.” According to Roger Sharpe, a writer and pinball enthusiast and historian, Peo’s game introduced such features as curved loops and spring-action kick-backs that are still used as standard components of modern machines.

The guts of a pinball machine are, to the untrained eye, a mess of wires, coils, buttons, switches, and relays that together look like a plate of multicolored spaghetti. 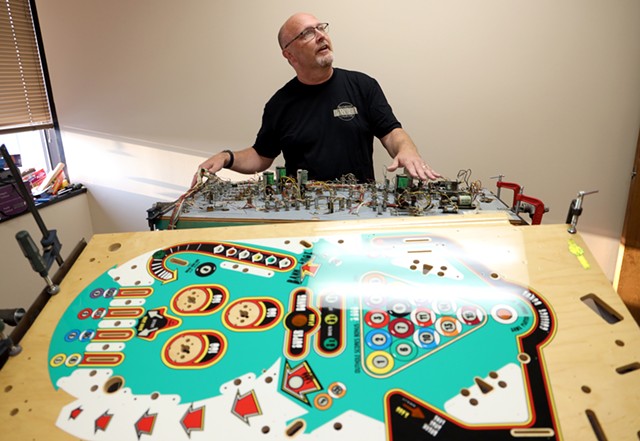 The underbelly of one, a 1977 game called Eight Ball, was on display in a restricted room at RPC where Nightingale and another collaborator, Zach Frey (IFPA Ranking No. 604), repair machines. In this case, Nightingale was tracing the ground wire from a dilapidated Eight Ball playfield to a new one.

Nightingale, for whom his boyhood infatuation for pinball has never flagged, was living the dream.

“It’s a dream because you get to live your childhood,” he said. “Most people don’t get to do what they always loved to do. For 37 years, I’ve been able to do what I love to do, I play games. How hard is that?”