They answer the call when people are in crisis 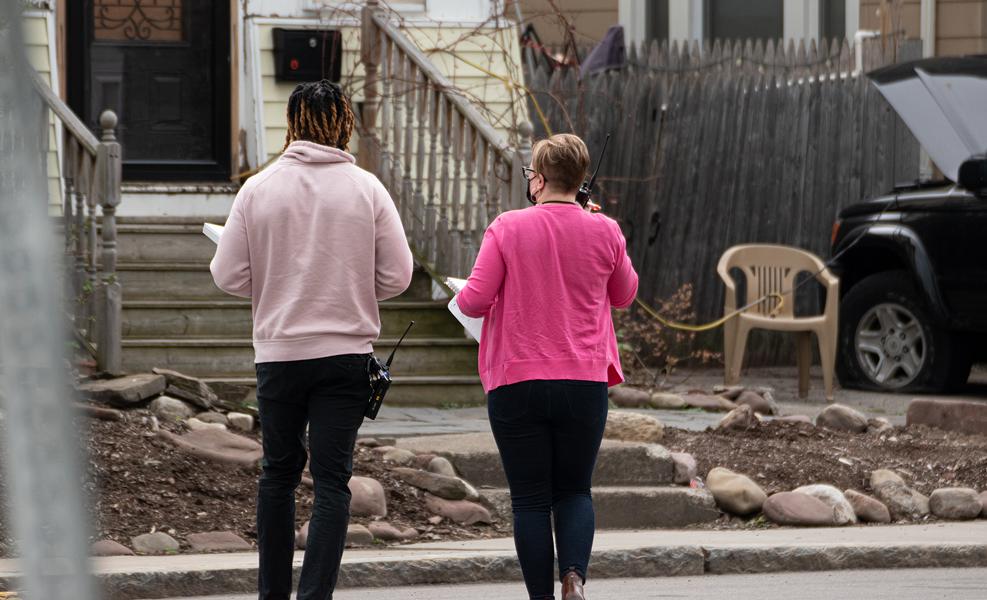 PHOTO BY JACOB WALSH Social workers Dré Johnson and Renee Brean head to the scene of a call for a man in crisis.
Social workers Dré Johnson and Renee Brean were cruising around Rochester’s east side in a city-owned white Jeep Compass. It was an overcast Wednesday afternoon and the two emergency responders for the city’s new Person in Crisis Team were talking about some of the recent calls they’ve handled, ranging from suicidal people on the Maplewood Bridge to intoxicated homeless people.

Every once in a while the pair injected a little levity by ribbing each other about their driving.

Their banter was interrupted when the radio called the pair to a home on Webster Avenue. There, a man in his late-20s with a history of mental illness had been behaving in a way that alarmed his care worker of the past three years.

“He has no weapons, and a history of him damaging the house,” Johnson said, reading notes on the call given through a mobile phone app.

At the man’s house, a Rochester Police Department officer made first contact with the care worker before beckoning Brean and Johnson. The group, including the care worker, headed inside for about 20 minutes before coming back out. The call was resolved simply — the man was upset that he hadn’t received his COVID-19 stimulus check yet so Johnson and Brean helped him access the online support site to see where his check is.

“He was really peaceful, actually pleasant,” Johnson said. “I was thinking, ‘Man, I’d like to just meet this guy on a regular day.’ But for some of these cases, it’s a lot more complex.”

City officials launched the Person in Crisis (PIC) Team in late January in response to community-wide calls for better mental health response programs that followed Daniel Prude’s death. Prude was in the midst of a mental crisis in March 2020 when he was restrained by Rochester police officers. As the officers pinned Prude down, he lost consciousness and stopped breathing. He was hospitalized and died a week later.

The Person In Crisis Team now has a staff of 14 who are deployed to handle 911 and 211 mental health and substance abuse calls alongside police. Typically, the Rochester Police Department makes first contact, and decides whether the scene is a better fit for social workers or police.

In the case of the man on Webster Avenue, for example, the officer at the scene left after Johnson and Brean entered the house. Down the street, an AMR ambulance stood by in case medical attention was needed.

“I look at it as we’ve added to this team in the city of Rochester in ways that we can engage the community,” Brean said. “So far, it has been going really well.” 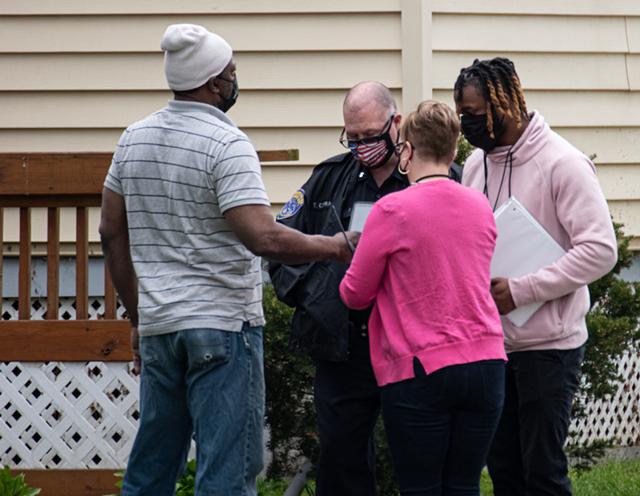 On a given day, the PIC Team averages about 21 calls for service, running the gamut from domestic disputes to suicidal people. On any given shift, one two-person PIC Team is active, with two teams deployed during some of the city’s more “active” hours.

The PIC Team is currently funded through a $1 million grant from the state’s Office of Victim Services and through a $350,000 allocation from the city that was generated by halving last year’s Rochester Police Department recruit class. Johnson said that in the coming months, he is expecting the team to double in size.

“Since we’ve gone to a co-response with police, our calls have increased dramatically, so we have to have more staff to meet that need,” Johnson said during an interview at PIC’s headquarters at the city’s Department of Recreation and Human Services on St. Paul Street.

As Brean and Johnson see it, they’re filling a gap when it comes to emergency calls. They’re called in to help when a uniformed officer might inadvertently escalate. The pair is unassuming and do not carry the authority figure air that police do. Brean is dressed in a pink cardigan over a floral print blouse and Johnson in a salmon hoodie with neck length, dark blonde dreadlocks.

“We have a very diverse staff, and we’re reflective of what the community in Rochester looks like, and that in and of itself, it disarms people,” Johnson said. “It’s, ‘This person looks like myself, this person looks like they could be my neighbor’...It makes people feel more comfortable and more safe, especially for people that have had so much overlap in the criminal justice system that just seeing the uniforms or the sirens is triggering.”

The CAHOOTS program in Eugene, Oregon, was built around a similar philosophy. Through that program, social workers respond to certain crisis calls in the city of 168,000 instead of police. The White Bird Clinic has operated the program for 30 years and in December, Rochester City Council approved a $25,000 contract with the organization to provide technical and professional development services for the PIC Team.

“You can be the nicest officer with best communication skills, and you will probably hear this if you talk to patrol folks, it’s what that uniform represents to that individual that can really set them off,” White Bird Clinic Director of Outreach Tim Black said during an interview with CITY in December. 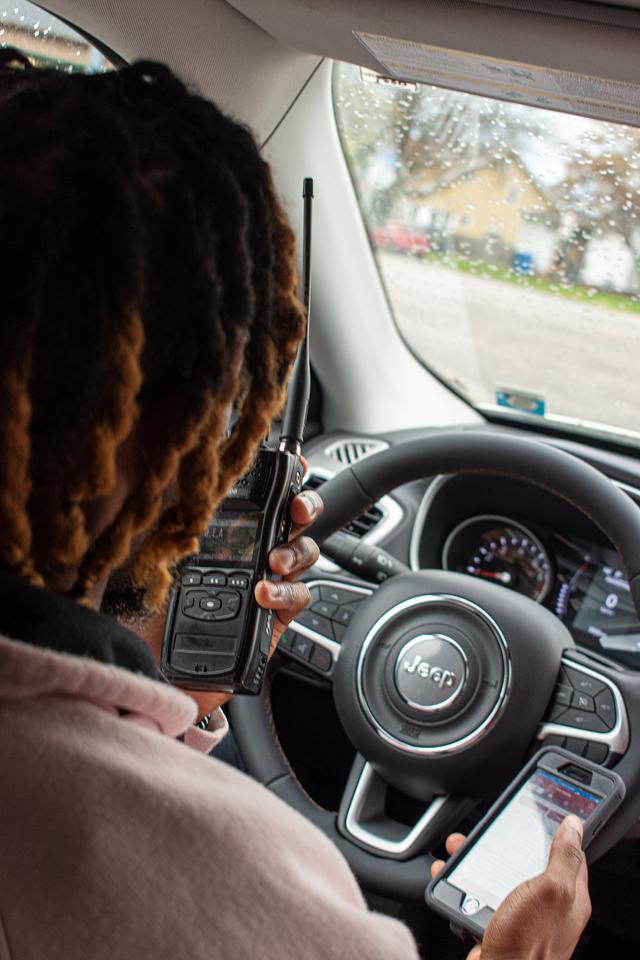 But the PIC team is not a one-size-fits-all solution to Rochester’s public safety needs, and in many cases, the police supersede it. For example, if a call involves an active crime or a situation deemed dangerous, the police department handles it.

The arrangement has created some tension and confusion in Rochester. Since the team’s formation, Rochester police officers have come under scrutiny for their use of force in several incidents where it appeared a person was in the throes of crisis. Those incidents have led many in the community to ask “Where was the PIC Team?”

Among those incidents was the March death of Tyshon Jones, who was shot five times in the chest by Rochester police officer Matthew Drake outside of the Open Door Mission homeless shelter on West Main Street. Jones had stolen a kitchen knife from the shelter’s kitchen and was walking toward Drake, at one point stating he was going to “kill him for Jesus.”

In February, an officer pepper-sprayed a 9-year-old girl who was in the midst of a crisis during an incident on Harris Street. In March, a woman accused of shoplifting was tackled and pepper-sprayed by police as her 3-year-old looked on.

For Brean, the Person in Crisis Team is not an ultimate solution. But, she said, it shows a step forward, and that more changes can come in the form of policy and procedures.

“We can’t just be a silo, it has to be collaborative with our community,” Brean said. “Both from the people we serve, but from other agencies, from churches, law enforcement. We all have to come together to make things better. It can’t just be one person.” 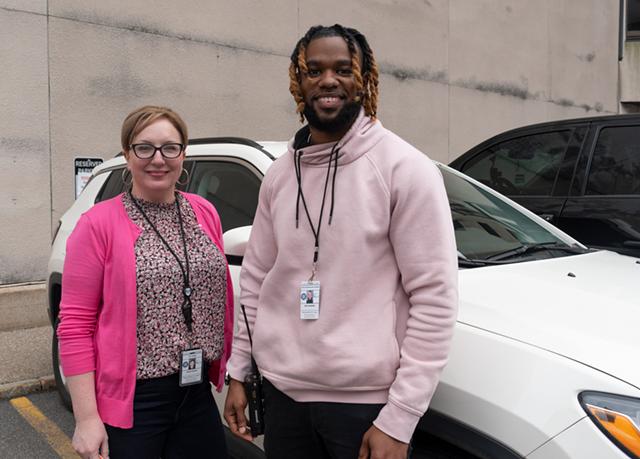 Both Brean and Johnson want to see the PIC Team grow and become more of an established force. But the current team, they say, is doing important work, whether it’s helping people get access to mental health resources, guiding a person to substance abuse treatment, or talking someone down from suicidal thoughts.

And on some days, it’s just helping a person get his stimulus check.

“That was a good call, we were able to help him out,” Johnson said, driving away from the home on Webster Avenue. “It makes you happy about doing what you do.”