Photos of time-eaten spaces at MAG

If you maintain a home or property, you know that taking care of the space is an uphill battle. Left alone, order returns to chaos. Photographer Robert Polidori is known for capturing entropy's progress on man-made structures when, for various reasons, maintenance on those environments has ceased.

The Memorial Art Gallery's current show, "Chronophagia" — which translates to "eaten by time" — explores Polidori's oeuvre through dozens of his large-format photographs from around the world.

"There's not a lot of happy here," says Marlene Hamann-Whitmore, director of academic programs at MAG. But she thinks the work also speaks to human resilience; all of these things happened, and people keep moving forward. 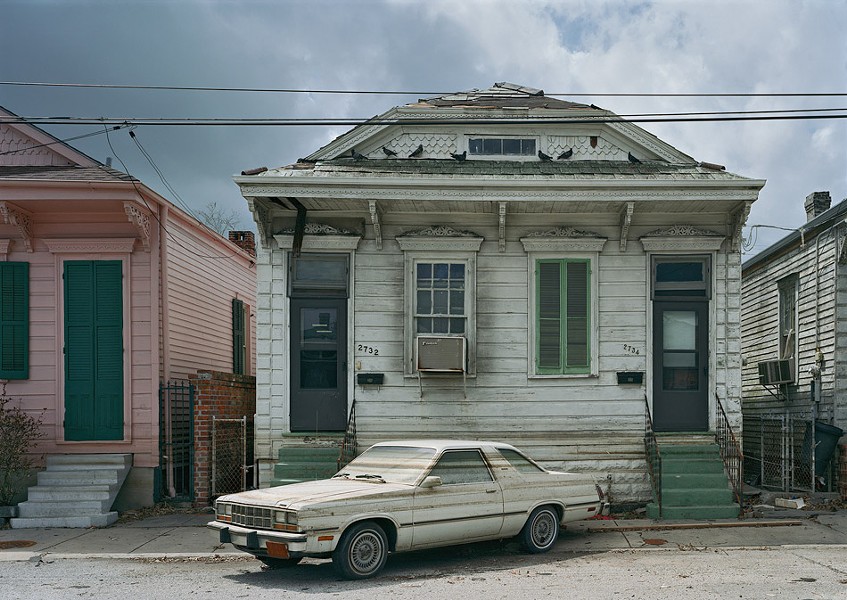 The selection of images (curated by Daniel Strong, a former MAG intern who is now associate director and curator of exhibitions at Grinnel College's Faulconer Gallery) documents the remains of spaces after cultural shifts and major disasters: post-Castro Havana; post-Katrina New Orleans; post-meltdown Chernobyl and Pripyat; post-civil war Beirut; abandoned apartments in New York City; and Versailles as it was being restored.

Visitors are met in the Grand Gallery's front room by Polidori's images of New York City from the 1980's, which reveal apartments that are empty of their deceased occupants but still host the trappings of those lives.

Because of Polidori's privileged access — a friend was the real estate agent assigned to all sales in an East 14th Street building — he was able to document the brief moments when evidence of those lives lingered. But next-of-kin had often beat him to it, and rifled through their relatives' possessions, upending order and laying bare the layers of life.

"Vandalism is a sort of necrophilia," Polidori says in the provided wall text. "One person's life treasures and mementos become the detritus of another's sifting."

In the New Orleans photos, the disaster is viscerally apparent through waterlogged furniture and watermarks left horrifyingly high on interior walls. Other rooms are dominated by the texture of blistered paint clinging limply to stained surfaces.

Polidori's work is so crisply detailed that it beckons you to step closer and take in specific bits. And when you do, the particular photograph fills your peripheral vision and floods the senses.

Most of the environments are architectural studies bereft of human figures, but in one of Polidori's Havana images, two boys dawdle in the shaded side of an otherwise sun-bathed courtyard, where tropical plants thrive amid a broken-down fountain, crumbling walls, and ornate windows with missing panes.

There's a haunted romance to many of the Havana interiors. People still inhabit these elegant great rooms filled with old-world character and antiques, but time has paused and the occupants are making do amid the ruins. "If you live there, you probably don't see it as romantic, you see it as, 'I'm hanging my laundry in the lobby of a hotel restaurant,'" Hammond-Whitmore says.

People were also dwelling in the abandoned headquarters of Lebanese Forces leader Samir Geagea, which Polidori photographed in Beirut in 1994. The wall text offers an anecdote: While eating falafel and gazing at the destruction, Polidori glimpsed an elderly woman carrying groceries through a ground-floor window. "It had never occurred to me that anyone could still actually live there," he says.

It's easy to understand why he was caught off guard. The difference between interior and exterior are negotiable — bullet holes riddle the walls that have not been reduced to rubble, and other parts of the structure seem dangerously unstable. Floors are invisible for the seas of dirt, broken bricks, papers, boxes, and cushions. 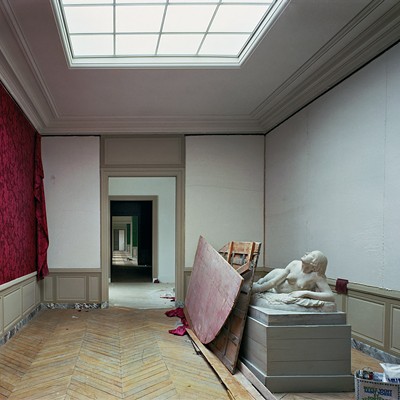 The photographs of Chernobyl and Pripyat, Ukraine, taken in 2001, convey time-decayed interiors — schools, a maternity ward, a nursery, as well as the ominous control room of reactor 4 — and offer the wistful details of a deflated basketball and still-ready school supplies on desks.

One of these images centers on a damaged blackboard, where a chalked phrase has remained legible since it was scrawled. Through a chain of contacts, Hammond-Whitmore was able to find someone to translate the text: "There is no return. Farewell, Pripyat. 28 April, 1986."

Polidori's images of Versailles, which span almost 30 years of restoration from 1985 to 2013, serve a more lighthearted purpose than the others — in these pictures, he documents the uncovering of layers of perpetual alterations, restoration, and upkeep. And he subtly points out that even spaces unadulterated by war, floods, looting, or nuclear fallout require constant maintenance.

This is the elegance of Versailles, with a 'pay no attention to the man behind the curtain' vibe, Hammond-Whitmore says.

Instead of the dollhouse-like, lavish projection usually presented to viewers, we encounter famous paintings casually leaning against walls, painters' ladders, the corners of decades of wallpaper peeled back from one wall, and all manner of worn, stained, and faded glory.