'Photo City' is a snapshot of Rochester

PHOTO PROVIDED A screen shot from "Photo City," a documentary about Rochester's iconic place in photographic history.
The shadows of George Eastman and Kodak loom large over the city of Rochester. Even as the legendary photography company has faced its share of hardships over the years — massive layoffs, bankruptcy, mismanagement, an ever-shifting technological landscape, and a dubious foray into pharmaceuticals — the Photo City imprint it left on Rochester has not faded.

Back in 2016, Irish filmmakers John Murphy and Traolach Ó Murchú traveled to Rochester and spent six months interviewing members of our city’s photographic community. They homed in on a handful of visual artists — from budding amateurs and hobbyists to those who make their living looking through the lens — to learn about their personal relationship with the art form and the city where they make their home.

Their resulting documentary, "Photo City," is a fascinating look at Rochester's history as "the image capital of the world" and how it continues to evolve. The filmmakers’ outsider perspective helps them provide a clear-eyed portrait of a city struggling to reshape an identity that for so long hinged largely on the reputation of a single corporation.

Conversations with former Kodak employees, historians, artists, and enthusiasts reveal a city with a rich history and a deep affection for the visual arts. The filmmakers find that even as the Kodak empire declined, photography has remained inextricably linked to life in Rochester. 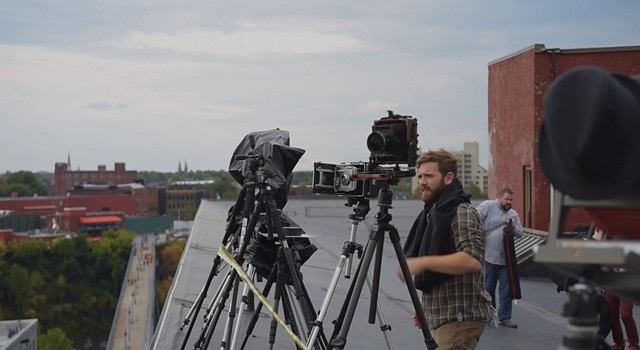 Among the artists and photographers featured in the film are CITY’s Frank De Blase, WXXI's Max Schulte, filmmaker Carvin Eison, and Todd Gustavson and Nick Brandreth of the George Eastman Museum. Each of them use the photographic medium for various purposes — whether to appreciate its history, to connect with people, or to understand their own place in the world.

“Photo City” premiered in Rochester at The Little Theatre’s One Take Documentary Film Festival in 2018, and later screened at the Dryden Theatre in December of that year. If you missed your chance to see it during those limited showings, the film is now available for the first time digitally through Vimeo on Demand, ready for quarantine-friendly viewing at home. It runs 78 minutes and can be rented for $5.

Viewed in the context of 2020, the film hits a little differently. As its tone veers between the inspirational and the melancholic, certain sections of it feel more timely than ever. At a time when so much around us seems to be in complete chaos, there’s some comfort in the idea that the only certainty in life is that things will, and often must, change. And the loss of a certain way of life doesn’t necessarily mean catastrophe. The film is a heartening depiction of the ways people will always adapt, learning from the past and using that knowledge to build something new.