Phone sex on the fringe

September 16, 2020
Yes, there are very good reasons why the two presentations of Cameryn Moore’s show at the KeyBank Rochester Fringe Festival start at 10:30 p.m. 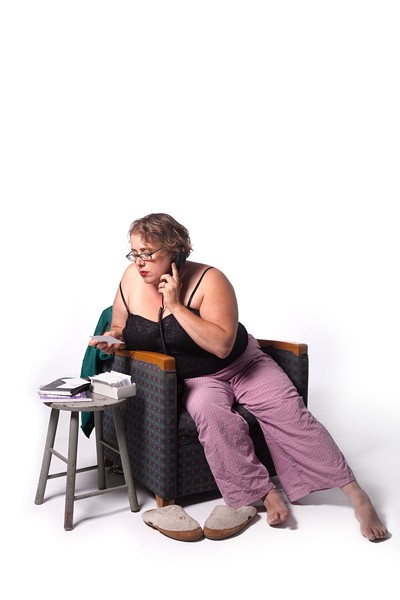 Moore first performed “Phone Whore” a decade ago at the Montreal Fringe Festival, and since then she has done it 250 times in 70 cities. She’ll add two more performances to that total at Rochester Fringe, September 18 and 25. It’s a recorded version of her one-woman play, but after each showing, Moore will be taking your questions live. And you will likely have a lot of questions.

“It’s definitely not something you would walk past the table at the high school career fair,” Moore admits. But it was 2009, there was a recession, she’d been laid off from her job as a marketing assistant at a textbook publisher in Boston. It was a time, Moore says, where an opening for a waitress job might draw 200 applicants.

“It’s amazing what you do when you’re desperate,” she says, “looking for some way to keep my head above water.”

A friend suggested the phone sex gig. Moore tried it. She liked talking to anonymous men who were — well, doing whatever — on the other end of the phone call. And, she admits, she was good at it.

“I started out being really confused about what was going on,” she says, “because while I had been very open about my own sex life, and felt really confident that I could handle whatever came over the phone line, the reality was quite different from what I had imagined, and what I had expected. And I spent the first six months being really confused and struggling to keep up with what was happening on the other end of the phone line.

But also, “I started to have very bad opinions about clients who were bad clients. And by that I mean strictly from a customer service point of view, they were jerks, right? It had nothing to do with what we were talking about, it’s like their attitude was poor as customers.”

Moore had already been writing plays by then, all variations on sex. Three months into the job, with all of that new material handed to her, she began working on “Phone Whore.”

“When I started doing phone sex, suddenly my world kind of shrank to the room that I had to stay in all the time at home,” she says. “And they say to write about what you know, and suddenly the sphere of what I knew was this 14 by14-foot room, and the phone line, and the people I talked to on the other side of it.”

Moore worked as a phone-sex operator for nearly eight years. Then, burned out on sex talk, she gave it up in 2016 and moved to the United Kingdom to be with her partner. Moore didn’t find the place hospitable to artists hoping to make a living, with its immigrant income requirements and anti-immigrant turmoil. So she was off again.

To Berlin, “still affordable, and supportive.” Where she remains to this day, writing and performing and creating new outlets to use as you will.

“I have learned that the human sexual imagination is far more vast and complex than anybody will talk about,” Moore says. “Phone-sex operators are going to get some of the deepest inside looks at what people’s fantasy lives are because of the anonymity, because there is no face there, because there is no chance of meeting. We are going to get waaay more behind the scenes, and it is incredible back there.”

Directions that may run counterintuitive to a good time.

“There are probably phone-sex operators who specialize in getting people frustrated and them hanging up on them,” Moore says, “because there are people who will pay top dollar for that kind of treatment.”

She did not write “Phone Sex” for shock value. The play is built around four phone calls, chosen for a range of sexual content that covers the profession’s entire landscape, while not lingering on one-off weirdness.

“I didn’t want to be bringing up only one person that was one call talking about Grandma and six green balloons and a donkey,” she says. “There’s nothing to be gained there. There’s no discussion about that one person that will be helpful.”

Sex can be played for laughs, she says, but often “they’re not ready for the drama.” She performs before curious, sexually aware audiences, or audiences willing to learn. People who are not swinging helplessly in desire’s wind, but engage in self-selecting.

Selecting the often-edgy material to be found at fringe festivals, these people have already passed through that social filter and are intent on interesting discoveries.

“Phone Whore” is certainly one such discovery. Or the play that absolutely cannot be named here, about nerds and the women who pursue them as some kind of trophy. Or one of Moore’s more recent works, “Muse,” drawn from a side job she’s had of life modeling for artists and “my experience as a plus-size person, conversing with the audience while they’re drawing, doing Q&As while holding poses.”

Moore franchises our curiosity about other people’s secrets, having established an open-mic night called “Smut Slam,” now found in 12 cities around Europe, and in some North American cities as well; “Smut Slam” is where people in the audience go onstage and tell dirty stories. Moore also curates a series called “YIKES!,” a chance for actors to describe their awkward performances, and “NOM,” a storytelling showcase about food.

“I like to create places where people are getting stories where they otherwise might not,” she says. “And also dealing with subject matter that can feel awkward and intimate at the same time, which I think is a very powerful combination.”

Yes, many paragraphs ago, she did say, “Write what you know.” But her artistic license has not yet expired.

“I’m definitely moving a little away from my own autobiographical sex experiences,” Moore admits. But she still loves “Phone Whore,” and is grateful for what it did for her career as a playwright and actor. “I can’t think of a better way to dive into the deep end of fringe performing,” she says, “than a play called ‘Phone Whore.’"