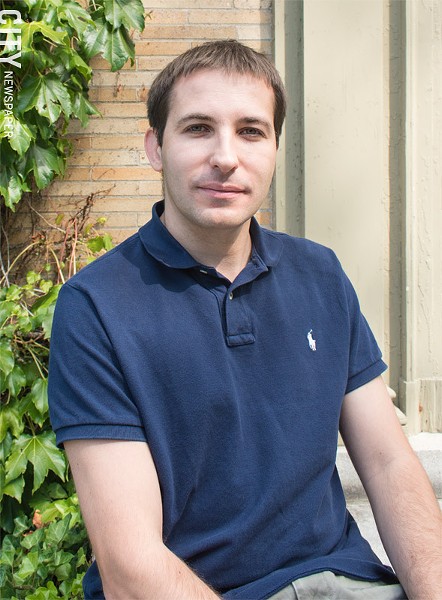 The George Eastman Museum announced last month that Dr. Peter Bagrov has been appointed as the new curator in charge of its Moving Image Department. Relocating from Moscow to Rochester, he'll be succeeding Paolo Cherchi Usai, who has taken a leadership position at the Centro Sperimentale di Cinematografia, Italy's national film institute.

In essence, the head curator helps form the guiding ideology or direction of the museum's collection, working to decide what films should be preserved by the museum and determining a plan of conservation and preservation. Head curators also have a hand in deciding what films are acquired to further develop the collection, and continuing research on items already in the archive.

Curators have to keep their fingers on the pulse of shifting tastes in film and modern methods of preservation, Bagrov says. "If you are a film historian, you should be aware of and interested in political history and art history in general. Also technology and dealing with people, and a bit of film theory, and of course dealing with the actual medium. Because film is a very physical thing. All this should be molded together in curation."

But Bagrov didn't immediately start off on a path toward becoming a film scholar. With a mind for science and a love of classical music, he actually earned a master's degree in physics before turning to film history and curation. But in talking with Bagrov, it's clear that background in the sciences has shaped his approach to the role, and he brings that analytical mindset to his work as curator.

He recalls growing up in Russia and seeing a banner in seemingly every grade school classroom with a quote from one of the first Russian scientists, Mikhail Lomonosov, reminding students: "mathematics should be studied, if only for that it puts the mind in order."

"So this is why I really like the idea of having some kind of technical background, to try to be more or less logical when you're dealing with humanities; more or less objective. But I am not a really good physicist. So I became a film historian."

The love of movies was always there, a passion that began with classic American musicals and broadened to silent films like "Nosferatu." That love of silent film continued through this schooling and well into his professional career.

It seems clear the job of curator was a natural fit, allowing him to combine an analytical mindset with his love of cinema. The ability to sort through the film archives was a draw, as was the possibility of making new discoveries. "Digging up the collection, finding stuff," he says. "This is something I enjoy the most."

Bagrov brings a wealth of experience with him to Rochester, having previously acted as the senior curator of Gosfilmofond, the national film archive of Russia. He has nearly 20 years of experience as a film curator and scholar, including a stint as the vice president of the International Federation of Film Archives. In addition to his senior curatorial position at Gosfilmofond, he was artistic director of Belye Stolby, the oldest and largest archival film festival in Russia.

He also previously collaborated with members of the Eastman Museum's Moving Image Department as a member of the advisory board for the Nitrate Picture Show. It was the ability to work further with nitrate that proved particularly irresistible when considering a position at the Eastman Museum, he says.

All of the Eastman curators of the past, from James Card to Cherchi Usai, were able to put their own unique stamp on the museum's collection during their time at the helm. They brought their own personality and specific interests to create a viewpoint that can clearly be seen, even if it's only after the fact.

"It would not be fun for me just to keep things running smoothly," Bagrov says. "And that shouldn't be enough, because there should be some new energy or adrenaline in an archive." The position also brings with it the opportunity to spearhead new projects, for example the Nitrate Picture Show, which was an idea originated by Paolo CherchiUsai. Bragrov admits he'd love people to look back on his time heading the collection and see a sign of his legacy. "But what that will be, I don't know yet," he says.

His work doesn't end up leaving him with much time to take in contemporary movies, aside from the occasional family-friendly fare with his children. (He admits to being less than impressed by the recent spat of live-action Disney remakes).

"The thing is, I do watch [modern] things occasionally, films that are being talked a lot about," he says. "But so many times, a film would be discussed actively and critics would say this is really a great masterpiece that, you know, outshadows everything in American cinema. And five years pass and that film is barely remembered."

Since he isn't following contemporary cinema, he adds, "I'm not going to pretend that there wasn't anything great made in the last 20 years. And I probably can think of exceptions myself. But so many times, there's this splash and then nothing comes out of it. So if a film is talked for quite a while, I will go and watch it. But as a historian, I need some distance."

"But I cannot keep up with everything," Bagrov says. "And I think a lot of modern films are not too good. My first interest is in history, and film happens to be a wonderful medium that tells a lot about history."

There's a fascination with the way films are often inextricable from when and how they were made, telling their viewers a great deal about the political, financial, and social state of the world at the time they were created.

"One of the exciting things about cinema is what it tells you about people -- a whole set of people: the people who made the film, people who watch the film, the audience at the time, and then the people who the film is about."

He's perfectly content viewing mostly older films as opposed to newer works. "I have access to so many excellent films from the past. I haven't seen so many of them, or I haven't seen a good print of them," he says. "There's just not enough time for everything, and there's just so much more to see."