Out of the gate running, McCoy Tyner never stopped 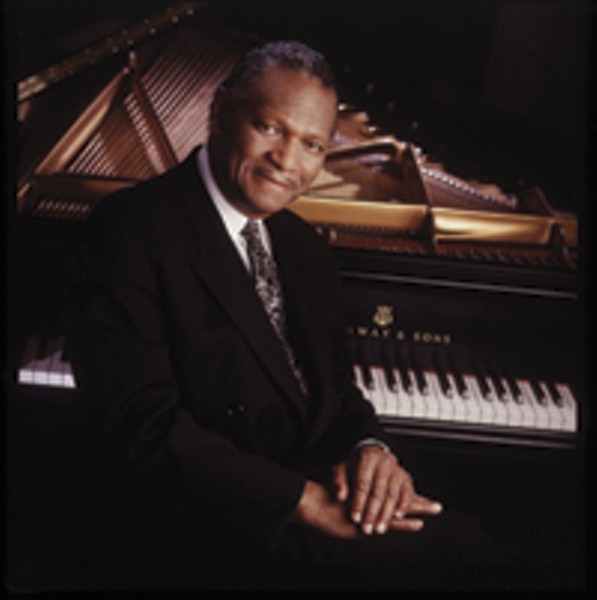 Right hand man: After playing for years with John Coltrane, pianist Tyner went solo and made a name for himself with his impressive improvisations.

Talk about starting at the top. McCoy Tyner was barely 20 in 1960 when he was tapped by John Coltrane to become part of arguably the greatest quartet in jazz history.

Tyner stayed with Coltrane until 1965, playing on some of the seminal albums of the 20th century and having his creative abilities challenged at every performance. But perhaps even more remarkable is Tyner's post-Coltrane career. Four decades later he remains one of the most highly regarded pianists in jazz. Tyner's trio, featuring Charnett Moffett on bass and Eric Gravatt on drums, will play at the Eastman Theatre during the Rochester International Jazz Festival.

During his teenage years in Philadelphia --- a hotbed of jazz in the 1950s --- Tyner had no shortage of musical mentors. Lee Morgan and the Heath Brothers were there; so were pianists Bud Powell and Richie Powell.

"Richie lived in an apartment house around the corner," says Tyner. "When he wasn't on the road, Bud would stay there. One time when I was 15 or 16, I was practicing and I turned around and Bud was listening."

Intimidating, but Tyner was used to playing in public. His family lived behind and above his mother's beauty shop; his piano was in the shop.

"People were getting their hair done while I had a jam session. My mom said, 'Go ahead.' It would be like a big band in the beauty shop, ladies under the dryer with a saxophone player right next to them," he recalls. "My mother was so cool, so supportive. I was the oldest son in my family. That contributed to the fact that I was very serious about playing piano."

So serious, that while still a teenager, he joined Benny Golson and Art Farmer's Jazztet. Also living in Philly at the time, on breaks from the Miles Davis Quintet, was John Coltrane. "My girlfriend at the time was a very good friend of Naima, his wife. That's how the connection was made," Tyner says.

But it was far more than connections; Coltrane recognized the brilliance of Tyner's style. When he left Davis' group to form his own, Coltrane called Tyner. It wasn't long before the world would get to know Tyner as the pianist on Coltrane's signature tune, "My Favorite Things." Tyner remembers clearly how Coltrane came to play this unlikely song. It began between sets at the Village Gate in New York's Greenwich Village:

"We were on a break and this guy came up and handed John some sheet music. John showed me the music and he said this guy thought it would be nice if he recorded the song. I was familiar with 'My Favorite Things.' It was part of The Sound of Music. I looked at John and said, 'You want to record this?' Because their version was very... I don't want to say...corny. I didn't really see the connection between that and the music we were playing. But John was a very clever man. He said, 'Yes, I think I may record it.' I said, 'Really?'

"He came over to my house and told me to play it like a vamp with two chords. I said, 'OK, fine, whatever you want to do.' It worked out well. It was really beautiful the way he visualized performing the piece."

Coltrane had taken a song that was the epitome of saccharine mainstream American apple pie music, pulled it apart and put it together again as a subversive modal masterpiece. It became the title tune of his album and a big hit on jazz stations. Coltrane's soaring soprano sax is featured in a short solo at the beginning and an extended solo at the end, but in between is a gorgeous, lyrical, five-minute solo by Tyner. The brilliance of the track, which still sounds gloriously fresh four-and-a-half decades later, is the contrast between Coltrane's fiery horn and Tyner's lovely chord-oriented melodies.

"There was something very enlightening about that recording. It's amazing when you're compatible with someone. I think John saw that early on. He was a beautiful human being," Tyner says.

On some live recordings it almost seems that Tyner and Coltrane had a sort of telepathic communication. "Yes, it's funny; sometimes that happens with people. You never know why and you never know when. We just connected."

Tyner stayed with Coltrane, contributing to such classics as A Love Supreme, until 1965. Coltrane was getting deeper into non-melodic free jazz. "I felt that I was there long enough and he was moving into an area that I didn't necessarily feel was the path I wanted to take," says Tyner. "I got as far as I could go with him and it was time for me to part and do my own thing."

Since that time Tyner has never looked back. He has released solo albums, small group albums, big band albums --- an average of two per year as a leader.

Perhaps most astounding is how current he sounds almost 50 years into his career. His last two albums, Land of the Giants and Illuminations, are full of superb original tunes and vibrant renditions of standards.

Tyner is known for his full, rich block chords, but equally distinctive is the manner in which his right hand takes off down the keyboard with flurries of shimmering notes, reminiscent of a rapidly flowing mountain stream. And his improvisations have only grown richer over the decades. He believes they're best when intuitive.

"When the music is really a part of you is when you don't have to think about it, when it just flows," he says.

The McCoy Tyner Trio and the Toots Thielemans/Kenny Werner Duo play at the Eastman Theatre, 26 Gibbs Street, on Wednesday, June 14, at 8 p.m., as part of the Rochester International Jazz Festival. $27.50-$50 www.rochesterjazz.com.