Perception of people and place

"A World Apart" and "Another America""Of Time and Buildings" 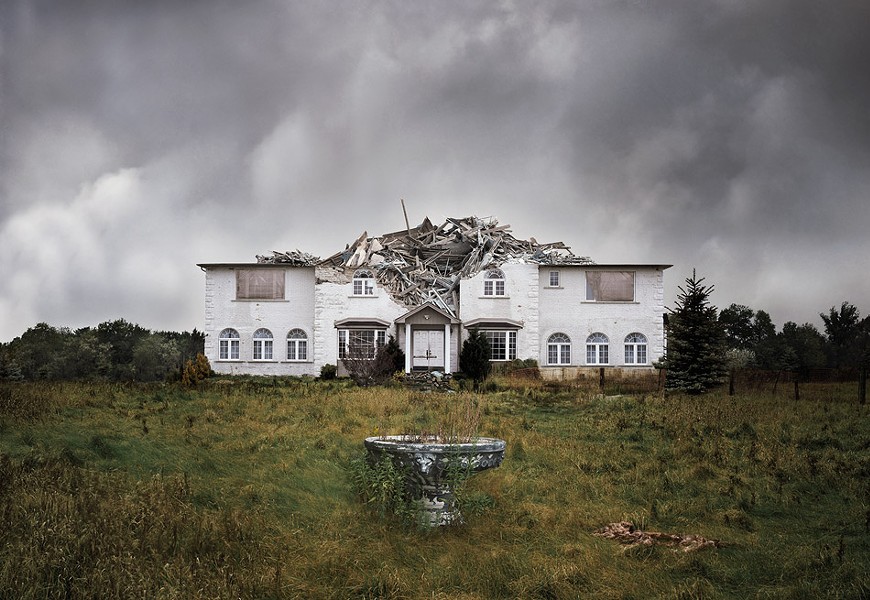 In the Eastman House's Entrance Gallery, 23 images make up "Of Time and Buildings," an exhibit exploring the relationship between images of our constructed world and how we experience place. Inevitable, unstoppable shift is a theme throughout the show, depicted both physically and metaphorically.

James Casebere's "Monticello #3" is a quiet interior image of a model of Thomas Jefferson's Virginia home and plantation. The model is dimmed and "flooded" with clear resin, empty of ornament except for the great clock used to bind the hours of his slaves. The work simultaneously alludes to the personal experiences of the primary author of the Declaration of Independence, and those bound to his household, and the eroding tides of historic memory.

Jeff Chien-Hsing Liao creates collages of another sort by digitally combining many layers of photographed people on the streets into one image. Liao's massive "Flatiron Building" print is positioned on the wall at a height that has viewers looking down at the people, as if we are floating slightly above them. A tangible pulse is present through the combination of moonlight bouncing off the building, a burst of street and city lights, and the activity on the streets.

In an interesting contrast, Liao's "Flatiron Building (during Hurricane Sandy)" captures nearly the same scene under the famous blackout and an angry-dark sky, with only car headlights brightening the scene. Regardless, some people linger on the street, including one enigmatic man, wearing a crown and holding a mask, accompanied by a smiling woman.

Two of Feng Bin's untitled works from her "Hutong at Night" series capture Beijing's ancient narrow alleys which linked homes to a shared water well and courtyard. These works serve as haunting afterimages for the non-existent: many of the dwellings have since been demolished to make way for wider, automobile-friendly thoroughfares — in particular the buildings seen here were demolished in the wake of the 2008 Olympics.

Susan Dobson's images from her "Sense of an Ending" series — photographs of suburban homes the artist has digitally manipulated to resemble broken down, overgrown versions of themselves — show the kinds of ominous places mothers beg mischievous children not to explore.

The insane attention to detail that goes into Lori Nix's miniature dioramas makes for utterly believable scenes in her finished photographs. Both from her "The City" series, "Anatomy Classroom" and "Violin Repair Shop" envision a post-human world filled with our ephemera, dilapidation, rot, and the slow and steady encroachment of micro-life.

Odette England's "Dad #4 (Left Foot)" and "Mum #14 (Right Foot)" are from her "Thrice Upon a Time" series, an exercise in pictorial vengeance. For this series, England photographed her family's former stud farm in Australia, and asked her parents to attach the negatives to the soles of their shoes and walk around the property once a month for a year. The damaged negatives were then scanned and printed, resulting in images as shredded and wounded as bitter memories.

Two exhibits in Eastman House's Brackett Clark and South gallery spaces depict observed intricacies of subcultures existing within, but separate from, the artists' own nations. In both Pavel Wolberg's "A World Apart: Photographs of Hasidic Communities in Israel" and Robert Weingarten's "Another America: A Testimonial to the Amish," two different cultures-within-cultures are explored through a studious outsider's perspective.

In 1999, photojournalist Pavel Wolberg stumbled upon a Hasdic wedding ceremony in Israel, and was struck by the balance of revelry and reverence found within. Wolberg's documentation of various Hasidic communities sheds light on the expression of individual and group identity through ritualistic practice, pageantry, and private moments of reflection.

Wolberg's smart use of angles and focus-directing light create dynamic images, many of which make the viewer feel present at the scenes. The texts accompanying many of the images describe ritual-heavy lives, and the particular ways some humans connect to their existences through old stories.

The meanings and history behind some rituals may feel alien to outsiders, but viewers can connect with several universal expressions, despite the particular way they come to life here. In "Wedding III, Toldot Aharon Hasidim, Bnei Brak" an elaborately dressed bride and groom, not allowed to touch one another just yet, each hold one end of a cloth ribbon while others look on. In "Funeral, Mea Shearim," streets, balconies, and rooftops are packed with mourners, the line of parked cars barely visible in a river of black suits and hats.

The images are mostly black and white with the exception of a few moody pictures of the setting sun, and of a carriage crossing a hazy field. Weingarten photographed from a distance at first, but soon gained the trust of some Amish elders, and was given permission to take more intimate shots of children at play, gatherings of men and women, and spartan domestic scenes.

For many of his shots, Weingarten practiced a patient version of French photographer Henri Cartier-Bresson's "decisive moment," by framing images and waiting, at times for hours, to seize some serendipitous moment when it transpired. In a triptych of a hilly road in Holmes County, Ohio, three nearly identical shots capture two horses rearing, a carriage passing, and a woman walking along the shoulder.

Weingarten's stark, sparse photographs convey a serene sense of timelessness, with the absence of billboards, cell towers, and street signs, but here and there, hints of modernity and main-stream culture stick out, as in the image of a group of bonneted women engaged in a game of volleyball in Elkhart County, Indiana.