A vintage sound for strings 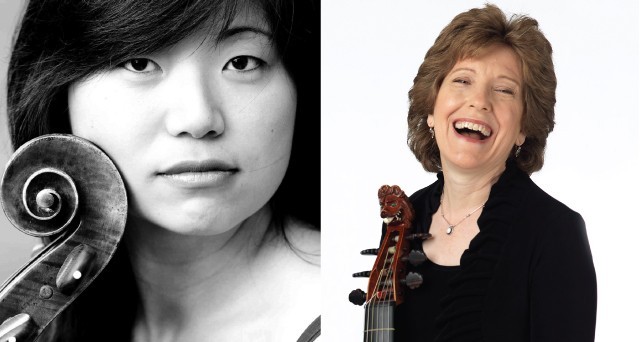 The early string instrument known as the viol (rhymes with “smile”) can frequently be found in Renaissance and Baroque art, usually in the hands of princesses, saints, or angels. For Pegasus Early Music’s September 22 concert “Viol3,” however, three viols will be in the hands of musicians Beiliang Zhu, Lisa Terry, and David Morris, whom Pegasus Artistic Director Deborah Fox straightforwardly calls “three world-class viol players.”

They’re also frequent guests of Pegasus – and the idea of friends sitting together playing chamber music is an important part of the viol repertoire, “fitting the spirit of the music,” Fox says. She adds that a popular 17th-century English collection of viol music was called “Musick for Severall Friends.”

The viola da gamba, or viol, or basse de viole (different names, the same instrument) has a long history in European music. It was a popular instrument – first in Spain, then Italy, England, France, and Germany – from 1500 to almost 1800. The viol developed in numerous sizes, from high to low in range, roughly like our modern violin, viola, cello, and double bass. The repertoire includes solo pieces and duos, as well as ensemble works which presage the string quartet, and their sounds were frequently heard at royal courts and in some homes. You’ll hear examples of all of them on this concert.

“It’s a huge repertoire with an incredible sound,” Fox says, “rich and lush, but with a transparency because of the period instruments, as opposed to the thicker sound of the modern cello.”

The beguiling sound of the viol is produced in a couple of very specific ways, which call for a particular approach to playing that’s quite different from that of modern string instruments. Terry and Morris described some of the details of performing on the viol, via email.

“Early bows functioned more like quill pens with extremely flexible nibs,” Morris says, “which allowed their users to sculpt both big phrases and little details with a great deal of control over the finer points, whereas modern bows are especially good at creating a penetrating, focused sound.” He describes gut strings (which were indeed originally made from animal guts) as “soft, flexible and a little rough-sounding. They have a certain amount of surface noise.”

“When you start a sound on a gut-strung cello or viol,” Terry says, “your body sinks into the strings. You welcome the sound, you encourage it to resonate.” The instrument is played “a gamba” – upright between the legs or on the lap, depending on the size.

“On the subject of the viol’s particular timbre,” Morris says, “I recall one 18th-century writer describing it as ‘thin and nasal, like the voice of a diplomat.’ I’d definitely characterize it as an ‘indoor’ voice, perhaps best suited to elegant drawing-room conversation.”

The music on the varied “Viol3” program focuses on British and French composers, and reflects the national styles prevalent in Renaissance and Baroque music. A large-scale suite by Marin Marais (a favorite of Louis XIV) is inspired by the dance music of the 17th century – minuets, sarabandes, gavottes, and many more – profusely ornamented in a specifically French style. According to Fox, British viol music is equally virtuosic, but also has “a quirky charm” and in some cases (notably, the fantasias of Henry Purcell) a surprising harmonic boldness.

“The sound of three bass viols is so ridiculously rich, it is like eating way too many desserts,” Terry says. “So while the Marais Suite for Three Viols was the centerpiece of the program, we decided to spend the first half playing combinations of other sizes of viols. We are very fond of the English repertoire – which is the most vast for us consort players – so we selected two suites for three viols, one consort set for treble, tenor, bass viols, and then some virtuosic bass viol duos from France, England and Germany.”

Morris says that the expectation of viol players as utility musicians is a key factor. “One of the best things about this instrument,” he says, “is that one is expected to be able to play any of the core three sizes of the instrument’s family – treble, tenor and bass. That incredibly flexible, collegial modality is part of what this instrument is and always has been about.”

The Marais suite is the longest piece on the program, and to hear the players describe it, the most fun. According to Terry, they’ll play its nine movements “round robin” style. “We trade roles for each movement,” she says. “We each have three turns to play viol 1 and viol 2 and viol 3.” The bass line and harmonies will be filled in by Leon Schelhase on harpsichord and Fox on lute.
“With the five of us involved, it’s really hog heaven,” Morris says, “since we have every possible means of sound production at our disposal. It made perfect sense that with three of us playing gamba, we would share all the duties and thrills involved in this music.

After its heyday of nearly three centuries, the viol was revived in the late nineteenth century, and it’s still going strong. There is in fact a Viola da Gamba Society of America, with Terry serving as its president.

“Our annual convention has over 200 viol players in attendance each summer,” she says. “This is because the viola da gamba is an excellent instrument for amateurs. Once you learn the technique on one size you can play all the other sizes – treble, alto, tenor, bass, great bass, contrabass – because the setup is the same.”