Tell us about the local artists you love and support. Post an anecdote or image on Twitter or Instagram with @roccitynews and #rochestercollectsart, and we'll add you to our Storify feed in the online version of this story. Or leave a comment below this story.

Our region has a massive, diverse collection of talented artists. But unlike other cities that still have major corporate players in town (like Atlanta with that sweet Coca-Cola cash), Rochester doesn't have large patrons of the arts. So it's up to individuals to help our arts scene realize what it can become, and then reach that potential.

While most of us can't afford an original work by well-established artists like Albert Paley or Wendell Castle, we can focus on boosting smaller working artists. Because Rochester has such an immense creative scene but doesn't exactly have a thriving arts market, collecting art is relatively accessible here. CITY asked a few Rochester-based arts patrons to discuss their collections and give advice to those getting started.

Local musician James Tabbi's extensive collection is almost entirely made up of works by local artists. "I never set out to collect," he says. "It just kind of happened organically."

Tabbi traces his early collecting back to the annual auction put on by Pyramid Arts Center (which later became Rochester Contemporary). "I started hanging out there because they had really great parties," he says. 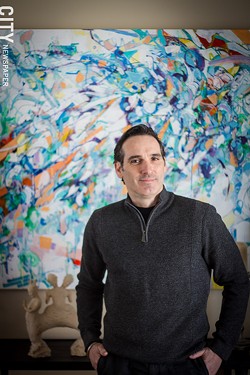 Today he owns around 200 pieces — the average price, he says, was below $500. He's acquired many works, at $20 apiece, from Rochester Contemporary's annual 6x6 art sale.

"There's so many great artists who are doing cool stuff in a small format," he says. In particular he favors purchasing a series and framing them together, so you don't even realize it's a 6x6.

Although Tabbi says he doesn't usually look for specific names when he buys art, he recently commissioned a large, cheerfully colorful painting by Nate Hodge, which draws the eye from across the kitchen to its place in the living room.

Looking through his collection of paintings and prints, it's clear that Tabbi favors black and white imagery featuring graceful figures — like the work of photographer Josephine Cardin — or graphic, textural abstractions. As a creative, Tabbi says he also derives inspiration from the work. "It's also just about having the creativity around me. I love that."

More than once, specific pieces have served as conversation starters at gatherings in his home. "That's a fun part about it — when you have good work in your house that's interesting and different, and not from Pier 1, it tends to generate interesting conversation," he says.

Surrounding himself with art serves as a reminder of specific experiences and places. "I can look at these pieces and remember what I was doing then, and the relationships I've built with the artists."

Others echoed the memory-lane sentiment: "Every object has a story," says Jonathan Binstock, director of the Memorial Art Gallery. "There are certainly works in my collection that are the material demonstration of a powerful and beautiful relationship, whether it's with my mother, with whom I bought a particular object, or a work by an artist whom I know and adore."

Binstock's office at the MAG showcases a loaned work by Barry Goldberg, a painter and friend from Philadelphia whose work Binstock has collected personally. Goldberg's painting reminds him of their friendship, but also offers Goldberg a chance of exposure to anyone who sees it in the office.

"You know where and when you bought something," Binstock says. "You probably can remember what you were thinking, why you did it. Five years down the line you may love it more or love it less, but that object, because you purchased it, has become a sort of sign post in the road. It marks a moment in time when you committed to yourself in a very particular way."

Investing in art isn't just about exchanging hard-earned cash for objects, it's also about deciding to have a constant presence in your personal space. It's hard to find something that has the same ever-present impact as visual art — music and literature can be put out of sight and mind when you're not in the mood — so it's important to be really into the work.

Maybe you already know what you're drawn to and can live with, but if you're unsure where to start, go out and become familiar with the arts scene. "There's no substitute for looking at the actual work — and as much as possible," Binstock says.

Attend art openings, events, and studio crawls — like the monthly First Friday and Second Saturday open studio events — where you can get facetime with individual artists and learn more about the people behind the work.

When you've identified something that really strikes you, go for it, Binstock says. "Buy that work of art that you love, hang it, and live with it. Don't be afraid to reappraise your judgement of the decision to purchase it as you go forward. What you learn from living with an object is important, and it informs what you will decide down the road in terms of other acquisitions."

Even seasoned travelers who have been exposed to art all over the world have a healthy appreciation for Rochester's artists. Collector Heidi Friederich used to work for a company in New York City that conducted art tours, and she's picked up art in her travels to Thailand, Ukraine, Ireland, and Yugoslavia.

"But most of my collection is local, and that's because I've been at the Memorial Art Gallery for 50 years," she says.

Friederich has volunteered or been employed at the gallery in various departments, and currently works in the Gallery Store, where she is constantly exposed to work by the regional artists they represent.

Every nook and cranny of Heidi Friederich's downtown apartment is filled with art, and everything is arranged elegantly with enough breathing room that individual pieces don't get lost.

One of the first paintings she bought is "Renaissance Man," a gorgeous, massive canvas by Beth Brown, which features a portrait of a young black man in contemporary clothing with a golden halo, surrounded by classical architecture.

Friederich is also a self-described jewelry freak, and displays many of her statement necklaces by Dee Dee Topham and Linda Lawrence not in boxes or drawers, but on the walls of her apartment. "It makes it easier to get dressed," she says with a laugh.

Over the years, Friederich has become friends with many of the artists she's collected. "I feel it's important to support them."

Gaining insight into the process and labor behind the work has a tendency to deepen our appreciation for the important role that creatives in our communities play.

"Artists have it really rough," Tabbi says. "It's hard to make ends meet. Not that I'm sustaining any of these people, but every little bit helps."

As an art patron and collector, you can be a participant in a living, breathing, growing, dynamic art scene, Binstock says. "That's got to be an important part of it: you want to support these living artists and strengthen that part of society."

While it's important to not presume that your collection or individual pieces will greatly appreciate in value, your patronage can contribute to the success of the artist, and the scene.

Regardless of the dollar value, your acquisitions might become beloved heirlooms to children, nieces and nephews, and friends. And your collection can serve as a meaningful snapshot of the best artistic activity during a given period of time in Rochester.