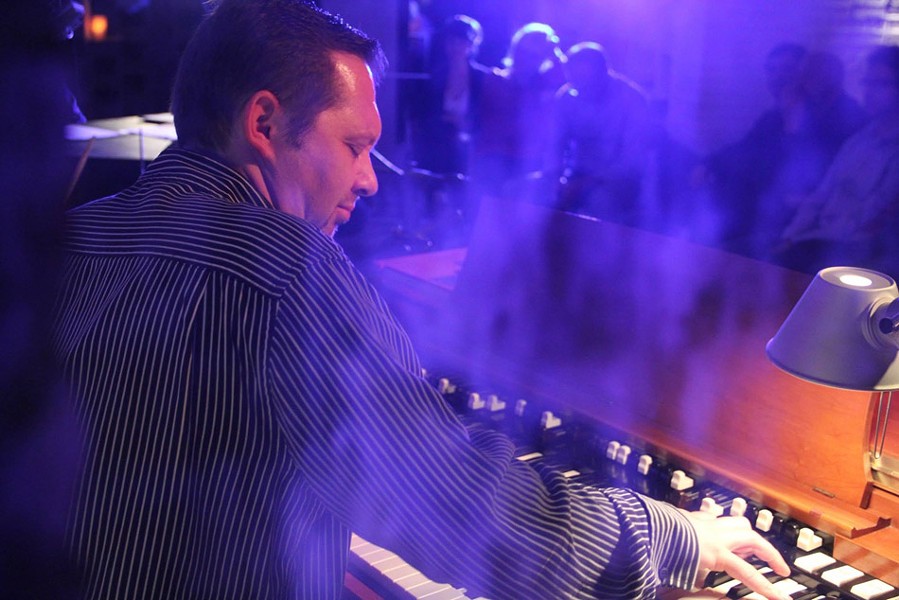 Pat Bianchi's fate was sealed on Christmas Eve 1983, when his parents took the 7-year-old to celebrate the holiday with his grandparents.

"I went into the basement and there was a Farfisa organ on a dolly with a big bow on it," Bianchi says. "I couldn't believe it. Then, Christmas Day, I went to my other grandparents' house, and there was an amplifier with a bow on it."

Three decades later, Bianchi is one of the country's top B3 organists, placing second in the Rising Star Organist category in last year's DownBeat Critics Poll. He'll play the Pythodd Room on Tuesday, May 24, with Bob Sneider on guitar and drummer Carmen Intorre Jr.

Music was part of Bianchi's life from the beginning. Both of his grandfathers and his father played in dance bands around Rochester. Sometimes his father brought home recordings of his gigs, and at 5 or 6, Bianchi listened.

"I really dug the sound of this one instrument," Bianchi says. "I found out it was a Cordovox, an accordion with organ electronics built into it. I would sit with my toy keyboard for hours picking out what that guy was playing."

Once he had his Farfisa, no one had to tell him to practice. He played solo gigs at 11, and began subbing in his dad's band at 13. Bianchi attended the preparatory program at the Eastman School of Music, and jammed at Giuseppe's on Rochester's west side.

At Berklee College of Music in Boston, he got involved in the vibrant jazz scene, and studied with jazz greats like Joanne Brackeen.

Soon after he graduated, a friend told Bianchi about a piano gig at the El Chapultepec Club in Denver. At "The Pec," he joined the house band playing six nights a week, backing touring stars like Dakota Staton, Javon Jackson, and Conte Candoli.

"Instead of going to New York right away, this was my second school," Bianchi says. "I'm on the bandstand with all these people. I'm getting my butt kicked. I've got to learn this tune and that tune, and deal with all this at 21."

In the meantime, he was getting back into organ and getting a bit restless. "I wanted to keep pushing ahead with my career and I wanted to see what New York was like, get involved in that scene, take a chance."

It was a trial by fire.

"We were in the middle of the gig, and Lou asked me if I knew 'The Masquerade Is Over,'" says Bianchi. "I said, 'No, I didn't know it.' He said — right on stage — 'Well, you're going to learn it right now.' I had the 'Oh, shit' kind of moment, but I figured it out after a couple of choruses. And when it was over, he looked over and smiled at me. So I passed the test."

One of Bianchi's greatest experiences was a two-organ gig with his idol, Joey DeFrancesco. But his relationship with today's top B3 organist didn't start well.

"When I was 16, my grandmother gave me a Joey DeFrancesco CD, 'Live at the 5 Spot,'" Bianchi says. "I thought, oh my God, this is amazing.

"When I was 20, in college, there was an Internet forum, Hamtech, for people interested in the Hammond organ. Somebody made a comment about the way Jack McDuff played left-hand bass. Being a kid and not knowing any better, I chimed in, 'Oh come on, that's garbage, the way you play organ bass is with the foot.' At that time I played all my bass lines with my feet.

"Somebody named 'The Authority' chimed in and said, 'Oh no, you've got to check this out, because to really play jazz organ, you play the bass with the left hand and use the foot as sort of an attack to go with the left hand. But you can't play all foot bass; it doesn't swing the same.'

"There was an argument between myself and this guy for about a week on the Internet. Then a friend called me up and said, 'Do you realize who you're talking to?' I said, 'No, I don't, and I don't care. This guy's full of shit.' He said, 'Well you're talking to Joey DeFrancesco.' I remember that moment; my stomach just dropped."

He immediately got on the computer, found DeFrancesco's website, and emailed him to apologize.

"I wrote, 'I'm embarrassed beyond belief, I can't believe what I just did, I'm an idiot.' I got a reply back in about 15 minutes with nothing but a phone number. So I called him up. First thing he says to me was 'How's that left foot doing?'"

They eventually became friends and Bianchi organized the two-organ concert. "I got my ass kicked, but I survived," Bianchi says. A few years ago, when DeFrancesco played at the Rochester International Jazz Festival, Bianchi played keyboards with him.

After decades of playing, Bianchi still can't express exactly what makes the organ so appealing, but he knows one thing:" There's nothing like it, the way it can fill a room. It's almost like it's alive on its own. And there's nothing like being up on the bandstand and just locking that bass-line in and swinging with the drummer."

When it comes to soloing, it gets even better. It's something he picked up from Dr. Lonnie Smith. "You start from nothing and build and build and build intensity, volume, everything. It can really hold people in a different way than an acoustic piano because you can make the instrument talk."