May 27, 2020
Perhaps the vehicle to lead us out of the coronavirus pandemic will be our cars.

The car, in which we are hermetically sealed. Unless we roll down the windows, which is bound to happen as summer arrives. One thing COVID-19 cannot stop.

While the virtual internet performances of musicians can be enjoyed in the comfort and safety of our homes, they are no substitute for the live music experience. And it’s wishful thinking that the big outdoor concerts that dominate our summer social calendar will return soon. Nationwide tours are falling apart as you read this, and social-distancing recommendations simply don't work at Constellation Brands-Marvin Sands Performing Arts Center or Darien Lake Performing Arts Center, where 5,000 or 15,000 people converge like spawning salmon in an Alaska river.

So we must think small. 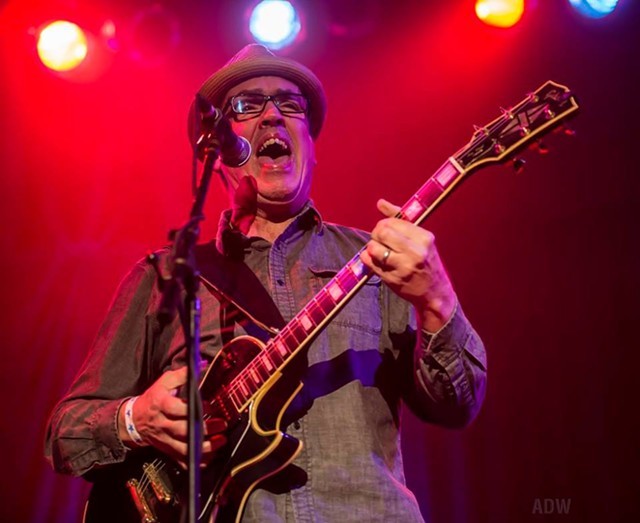 Here in western New York, live music on a summer evening returns next week. It will happen in Lima, with a population of about 4,000, just a short drive south of Rochester. Fanatics Pub is introducing its Tuesday-night Drive-In Concert Series with a  sold-out June 2 show featuring the blues of Steve Grills and the Roadmasters. The live shows – nothing virtual here – will be held in the parking lot next to the pub at 7281 West Main Street, in Lima.

"I knew that drive-ins were going to be part of phase one," he says, "and I saw in Europe that they were doing something similar."

Indeed, we've seen drive-in concerts in Ostrava, Czech Republic. Now they've spread to Tupelo Music Hall in Derry, New Hampshire, and a parking lot where people listened on their cars' FM radios to a band playing rock covers. A friend of Shelly's who lives in Tupelo, and frequently attends shows at Fanatics, gave Shelly a positive report on how that was going.

"I reached out to the Livingston County Health Department, to see if it would be OK," Shelly says. "I went to my town supervisor, my village board code enforcement, they all thought it was a great idea."

So it's on. They started building the stage last week. With summer festivals all across the country being cancelled, finding available touring bands is difficult. But Shelly has also managed to book the blues band The Pete Griffith Group on June 9, blues-rock guitarist Paul Nelson on June 16, blues singer-pianist Hanna PK on June 23, and bluesman Gabe Stillman on June 30. Each car load is $50 except for Nelson, whose résumé includes playing with Eric Clapton, Buddy Guy and Johnny Winter, thus justifying his $75-per-car price. The lot will open for each show at 5:45 p.m., and  the music starts at 6:30 p.m. For tickets, call (315) 573-2411.

Shelly is arranging the vehicles based on the size of the car; MGs up front, monster pickup trucks in the back. The space next to each vehicle will be left open for lawn chairs. There will be room for 32 vehicles at the Steve Grills show.

Shelly will continue to book outdoor concerts through the summer, including afternoon events and shows featuring music other than blues. Fanatics Pub generally hosts shows built around local bands, with a smattering of national acts, but Shelly thinks his indoor shows won't return again until September.

The Lima Crossroads Blues Festival at the end of July is still on, for now, but the social-distancing logistics of a larger event are a threat. "I'm planning on it," Shelly says, "but I'm kinda not too optimistic it's gonna happen."

Necessity is the mother of this reinvention. There's been a resurgence of interest in drive-in movies in the region: Vintage Drive-In in Avon and Silver Lake Drive-In Theater in Perry. So now, drive-in concerts are a thing. Around the country, they're being called "Concerts From the Car" and "Concert in Your Car." Keith Urban playing a secret show at a drive-in theater for 200 front line workers at Vanderbilt University Medical Center. Or, musicians just playing in a field in Austin, Texas.

Electronic musician Marc Rebillet has scheduled an eight-city "Drive-In Tour" which is, as promised, happening at drive-in theaters. Shows are set for the parking lot at Yankee Stadium.

About two weeks ago, a bar in West Bethlehem, Pennsylvania, tried a similar idea to what Fanatics Pub is doing. An estimated 40 people showed up in their cars at the parking lot outside The Wooden Match, listening to an acoustic duo and ordering food from their cars. But a debate over the wisdom of the event erupted on the restaurant's Facebook page, after concert patrons left their cars and wandered about, ignoring social-distancing guidelines to wear masks and keep six feet of distance. And, according to the governor's office in Pennsylvania, gatherings of 10 or more people is prohibited.

Semantics: Are people sitting in their cars a gathering?

Shelly has set guidelines to hopefully assure the concerts won't look like news footage from a Colorado bar that's just reopened with the lifting of the state's stay-at-home restrictions: "IT'S THE WILD WEST, EVERYBODY!" At the Fanatics Drive-In Concert Series, leaving your assigned spot will be prohibited. Unless you need to use the restroom inside the building, where patrons will be asked to wear a mask for entry, one or two customers at a time. And, no motorcycles, no smoking, no pets.

Concertgoers can use their phones to order food and non-alcoholic drinks, paid in advance by credit card, and brought car side by servers wearing masks and gloves.

"Everybody said I could have alcohol out there, and people can bring coolers and everything," Shelly says. "In my guidelines I put down no alcohol because I figured they're going to do it anyways, and as long as they do it responsibly no one's gonna police them. But I did want to have that out in case people try to become, you know, people try to turn it into a tailgating party.

"But I think most people are going to be responsible."