For the first time in 50 years, a spawning female sturgeon has been found in the Genesee River.

A crew led by Dawn Dittman, research ecologist at the U.S. Geological Survey’s Great Lakes Science Center, caught the 61-inch, 70-pound sturgeon on May 25, just downstream of the Route 104 bridge. The area is a known hot-spot for sturgeon and since May marks the spawning season for the fish, the crew decided to cast gill nets to see if they could catch a spawning female.

The spawning fish wasn’t just any old sturgeon. The crew was able to determine that the spawning female was one of 900 three-month-old fingerlings released into the Genesee River in 2003 as part of a multi-agency program to restore the fish in the Lower Genesee River and Lake Ontario. Dittman estimated that there are another 200 female sturgeon from that group that are also of spawning age.

“It’s an indication of the overall health of the system,” said Dittman, the lead scientist for the restoration effort, during a news conference Thursday, held near the river gorge just outside of Seneca Park Zoo. 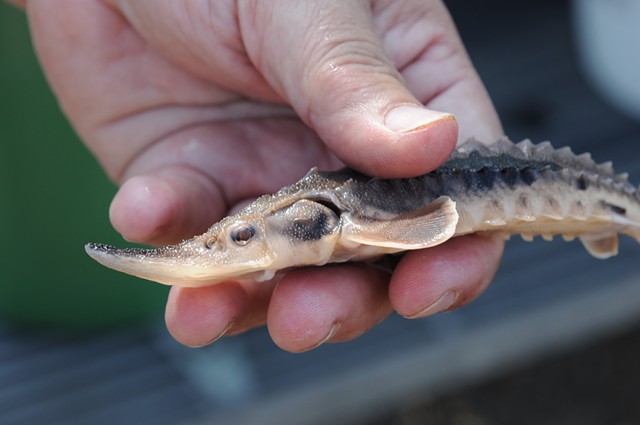 The captured sturgeon was released back into the river, according to state Department of Environmental Conservation spokesperson Lori Severino.

Sturgeon are native to Lake Ontario and the Genesee River, but habitat loss and overfishing decimated the population, causing it to dwindle to almost nothing by the early 1900’s. Pollution in the Genesee River and near-shore areas of the lake were an impediment to restoring the fish.

But after decades of addressing and cleaning up pollution in the lake and river, staff and researchers with the U.S. Geological Service, the U.S. Fish and Wildlife Service, the state Department of Environmental Conservation, Seneca Park Zoo, and the Seneca Park Zoo Society decided to reintroduce the fish. They believed the lake and river waters were clean enough that sturgeon could survive, grow, and reproduce.

The team has since released several thousand sturgeon fingerlings into the Genesee River.

State Department of Environmental Conservation Commissioner Basil Seggos hailed the milestone, which he said was the result of effective partnerships and investments in environmental projects. He pointed to a county project to replace a wastewater pipe that was happening a stone’s throw away, and another project further down the river to clean up historical pollution from Kodak.

“To see it come back after 50 years is really an amazing moment,” Seggos said of the sturgeon during the news conference.

But Dr. Jeff Wyatt, a Seneca Park Zoo environmental advocate and its former veterinarian, said the spawning female sturgeon was a “good news story” and a “story of hope.” The restoration effort is something that could be replicated locally, nationally, or even internationally.

He concluded his remarks with a sentiment that seemed to be on the minds of the partners that gathered Thursday to announce the spawning milestone.

“Cheers to the fishes,” Wyatt proclaimed.