PHOTO BY ANDY GRAUPMAN Skywatchers view eclipse from Hamlin Beach.
Did you get to see it? The Rochester area and much of the U.S. was treated to a partial solar eclipse at sunrise Thursday morning, when 78% of the sun was obscured by the moon, creating a crescent sunrise effect.

Astronomy fans gathered at several locations around greater Rochester to watch through eclipse glasses and filters.

Dan Schneiderman of the Rochester Museum & Science Center organized a viewing party at Martin Road Park in Henrietta that drew a surprisingly big crowd. "I would say over 200 people. We even ran out of solar filter glasses, which I was not expecting. This is quite the crowd to see, I could not be any more pleased at how many people came out," Schneiderman said. 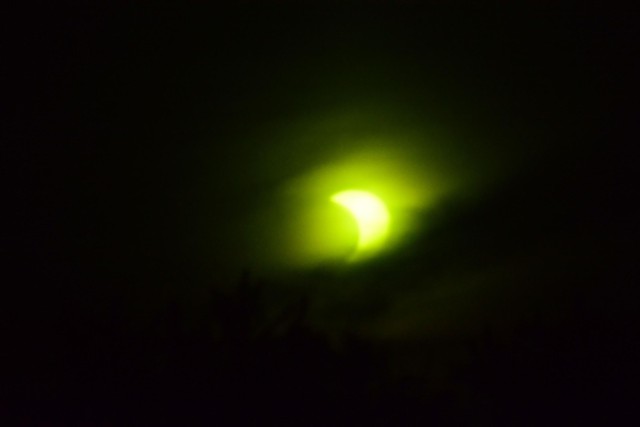 Among the group at Martin Road Park was a group of U of R physics students, including Mary McMullin.

"It's as if it's a crescent moon, but it's orange through glasses, and it's cool...I can't say if it feels dimmer, but it could very well be, I don't know,” McMullin said.

If you missed Thursday’s solar show, mark your calendar - our area will be in the path of a much more dramatic total solar eclipse in April 2024.