June 04, 2020
On Park Avenue on Thursday it was like there was no pandemic.

Storefronts teemed with life, families strolled up and down the sidewalk, and al fresco dining was in such demand that city officials said putting tables on city streets was all but certain in the near future.

It was the first day that restaurants in Rochester and the Finger Lakes were permitted to open with outdoor seating — and the rush for a seat was evident.

“Park Avenue instantly came back to life,” Jason Snyder, the owner of Blu Wolf Bistro, said as he coordinated the first lunch rush he has seen in months. 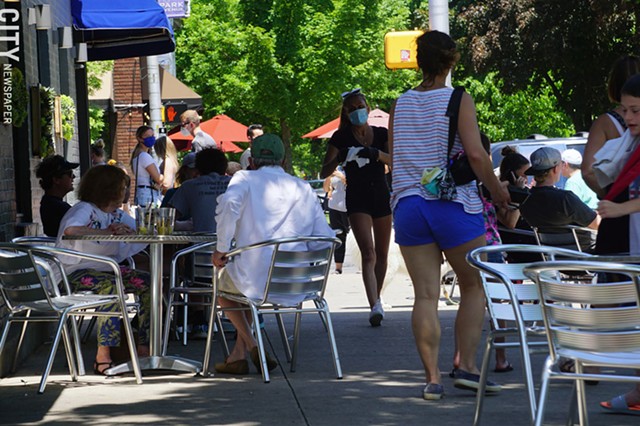 To accommodate the opening and cut restaurants that have been hit hard by the state’s shutdown order some slack, the administration of Mayor Lovely Warren waived all sidewalk cafe permit fees, and loosened regulations to allow all privately owned space, like a parking lot, to be used for dining.

Officials said the next step was likely to be the introduction of street seating — as in setting up tables in roadways curbside.

Per the governor’s guidance, tables must be spaced at least six feet apart for outdoor dining and all staff must wear face coverings.

As CITY previously reported, officials have been considering creative options for outdoor seating, including modifying right-of-ways to allow restaurants to do things like use streetside parking spaces for dining or outright converting roads into dining areas.

Restaurants can apply for those uses via a new city-sponsored website, jumpstartingroc.com. Officials will determine where street al fresco dining will take shape based on demand and feasibility.

“We’re going to continue having conversations with business owners, residents, and community groups on what makes the most sense,” city spokesperson Justin Roj said.

Sidewalk cafe permits typically cost $40 per table and four seats. Those waivers would apply to street seating as well.

“For the city’s purposes, the incremental benefits from permits is outweighed by the public benefit of waiving the fees,” Roj said. “For both the restaurant owners and the customers.”

“It’s not just on the table, if you look at the website, it says coming soon,” Gruber said. “We’re working on a number of things to build on this...the more feet we get on the street safely, the better.”

The scene on Park Avenue on the sunny afternoon was as lively as ever. The only sign of a global pandemic were the masked faces. Dozens of people dined outside of restaurants, including Blu Wolf Bistro, which opened at 11 a.m. and had sidewalk seats wrapping around its storefront.

Snyder called the lunch rush a relief and said he was willing to adopt any measure he could, including setting up tables in the street, to maximize and accommodate customers.

“It all comes down to what we’re allowed to do,” Snyder said.

The city’s plan to allow street seating is not unheard of during the pandemic. Cincinnati, Ohio and Tampa, Florida, for example, have already closed streets in restaurant districts to make way for street seating. Cities across the nation, including New York, are weighing similar options.

Over at the South Wedge’s Tap and Mallet, owner Joe McBane was caught off guard by the governor on Wednesday giving the greenlight to outdoor dining. McBane said Tap and Mallet won’t be opening for outside seating until June 13, when it will have tents set up in its private parking lot for dining.

“The whole thing’s moving so fast,” McBane said. “Sometime around 3 o’clock yesterday, they said, ‘Oh yeah, you can have outdoor seating tomorrow!’ I’m like, well, that’s not going to happen, but great.”

City regulations were not the only necessary changes to make the return to outdoor dining possible.

For McBane to serve beer in his parking lot, for instance, the State Liquor Authority needed to give its blessing. On Thursday, the agency issued new guidelines detailing new options for bars and restaurants.

The guidelines now allow a restaurant to pour booze anywhere on its property outdoors. Likewise, the Liquor Authority will allow alcohol on public property, as long as the municipality submits a plan outlining where street dining will be offered.

Roj said there are other considerations that need to be made with a return to a semblance of business as usual for restaurants. He wondered whether expanded sidewalk and street service could impede wheelchair users. Officials from the Mayor’s Office and City Council said they were monitoring the situation.

“If we encounter situations like that, we have to have conversations with the owners of those businesses,” Roj said. “If those conversations can’t be had immediately, we need to follow up with the (Department of Neighborhood and Business Development) or another appropriate agency. It’s a critical element in all this that can’t be lost.”

Gruber shared the sentiment and acknowledged that the sentiment, and said the situation is extremely dynamic.

“There’s just so many moving pieces when it comes to emergency vehicles, refuse, water, all of that stuff,” Gruber said. “That’s really the extent of it, but I hope we’ll have a plan out to the community soon.”