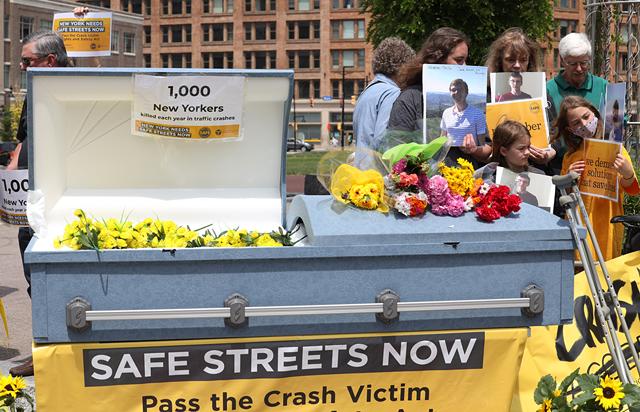 Jack Koval had a bright future when he graduated from college in 2016 and left his home in Rochester to take a dream job in New York City, where he found an apartment overlooking the Hudson River.

But six weeks after moving to the city, the 22-year-old Koval was struck and killed by an off-duty police officer as he crossed the street in a crosswalk.

The driver ultimately had his license suspended for 90 days after a Department of Motor Vehicles hearing, where he was found to have committed several driving errors, Koval’s mother recalled. But the driver never faced charges or was ticketed, despite a news report that there were signs of a high-speed collision. Koval’s family sued the officer, and the case is ongoing.

“We need more protection for bicyclists and pedestrians,” his mother, Bobby Koval, said.

She joined Rochester-area members of the statewide organization Families for Safe Streets at Parcel 5 on Wednesday to call on lawmakers to pass legislation that they said would provide additional protections for bicyclists and pedestrians by addressing speeding, reckless driving, impaired driving, and the rights of those who are struck by a car.

They called on state legislators, who close out their session on June 10, to pass the Crash Victims Rights and Safety Act, which is made up of eight bills that, among other things, would:

Families for Safe Streets asked the public to visit transalt.org/cvrsa and sign its petition supporting the legislation.

Two Monroe County legislators, Democrat Rachel Barnhart and Republican Jackie Smith, recently introduced a proposal that would require drivers to leave a three-foot buffer when they pass cyclists. All 29 legislators have signed on in support of the proposed law, which would be named after Carrie Ray, a 46-year-old teacher and avid cyclist from Clarkson, who was struck and killed by a passing truck while she was riding her bicycle on Sweden Walker Road in 2019.

“These are our fellow citizens who travel our streets and they deserve to make it to their destinations unharmed,” said Barnhart, who supports the Crash Victims Rights and Safety Act, at the news conference.

Patrick Lynch of Irondequoit also spoke in favor of the act. His son, Michael, was struck by a vehicle as he tried to cross Cooper Road at 7:45 a.m. on March 30, 2017. The 14-year old, who was a freshman at Irondequoit High School, died of his injuries two weeks later.

“He had a heart of gold, he would do anything for anybody, and he was taken way too soon,” Lynch said.

By talking to witnesses and reviewing police reports, Lynch pieced together that his son, who was struck a block from home as he walked to school, initially tried to cross Cooper at a crosswalk, but drivers either stopped in the crosswalk or would not let him in. He tried to cross at a different spot and was struck by a northbound vehicle.

As a result of Lynch’s death, the speed limit on Cooper Road near the high school was lowered to 25 mph. That was a positive development, Lynch said, but one that requires follow-through.

“I want to see enforcement,” he said. “There are speed limits in place that are not enforced.”