March 06, 2018
At a press conference this afternoon, city officials in effect rebooted plans for a theater and apartment building on Parcel 5, a prime part of the former Midtown Plaza site downtown.

The basics of the plan remain the same: A 3000-seat theater, fronting on Main Street, with a 150-unit apartment building at the rear. The Rochester Broadway Theatre League will own and operate the theater, and Morgan Management will build the apartment tower.

What's new: The theater part of the complex is now named the Golisano Arts and  Entertainment Center at Midtown Commons. "It is now more than just a theater," Mayor Lovely Warren said. "It is an entertainment complex that will anchor our downtown with hundreds of thousands of visitors annually." 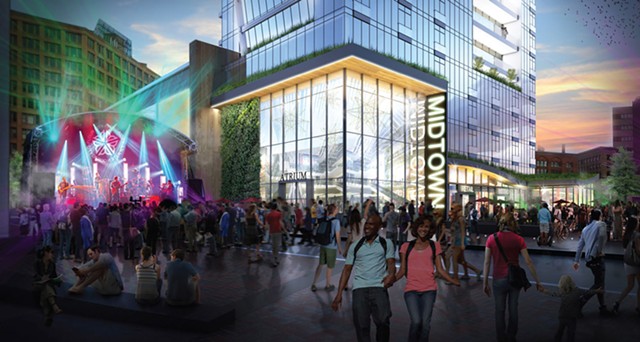 The plan includes additional "entertainment venues": possibly an I-Max type movie theater, as well as new outdoor performance space, including a "green roof" providing space for events. The open space between Parcel 5 and Elm Street will be preserved and enhanced as public space.

The issue of funding remains. The estimated cost of the arts and entertainment center is $85 million. Paychex founder Tom Golisano pledged $25 million for the theater a year ago, but RBTL has not announced additional commitments since then. The city is seeking $20 million from Empire State Development, but officials say that overall, funding will come "mostly through private contributions."

A downtown performing arts center has been a priority for Warren, who stresses its ability to not only create jobs but also bring an estimated 300,000 to 500,000 people downtown each year.

Plans for a movie theater were added to address concerns that the highly visible building would be dark part of the year when RBTL has no big touring shows scheduled. In addition, Warren is asking City Council to commission a national firm to evaluate concerns about the RBTL theater competing with local arts venues. Warren is also asking Council for support for the overall project.

Asked by a reporter whether the project will become a reality given the many proposals in the past that didn't come to fruition, Warren pushed back. This proposal is different, she said, because it is backed with a serious financial commitment from Tom Golisano.

But more important, she said, is that Rochesterians have to decide whether it will continue to look backward at what Rochester once was or it can embrace what the city is becoming. Warren described the choice as between stagnation and vibrancy. If Rochester is going to compete with other cities around the country for businesses and growth, she said, stagnation isn't the right choice.

Parker admitted that 20 years ago, she, too, was skeptical of building a performing arts center downtown. Thousands of people are now living downtown, she said, and the city is changing.