For artists, the extreme changes of 2020 — from the world being put on hold by disease to the country’s reckoning with racial injustice — had an undeniable effect on their creative output and, in some cases, led to more radical art.

Sweeping and sudden COVID-19 regulations meant artists were forced to contend with the notion that they were deemed “non-essential.” As museums, galleries, theaters, and music and arts venues shut down and major arts events — like the Lilac and jazz festivals — were canceled, creatives were left in the lurch.

But the Rochester arts community quickly made moves to adapt.

By the end of spring, as artists and audiences were adjusting to a “new normal,” the image of a Minneapolis police officer killing George Floyd inundated TV screens and prompted artists to respond anew. It happened again in the late summer, when the public learned of the death of Daniel Prude at the hands of Rochester police officers five months earlier. Their deaths brought systemic racial injustice to the fore.

In speaking to a few Rochester artists to see how the crises of last year affected them creatively, two themes emerged.

Rare opportunities for reflection and connection

For local R&B singer-songwriter Marshay Dominique, the events gave her time to reexamine her sound, work on new projects and take her writing in a more honest direction. One outcome of this process was freeing herself of preconceived notions about what it takes to reach success as a musician.

“[2020] taught me that I can definitely stand on my own as an independent artist,” Dominique says. “I want to just be raunchy. I wanna swear. I wanna be angry. I wanna party. I wanna sound like a rapper even though I’m not.”

Dominique released a mixtape on Soundcloud last year that she says hints at her new sound.

Artist, filmmaker, photographer, and organizer Adrian Elim says time suddenly allowed them to focus more intimately on their art, and in particular, collaborations — some of which culminated in the “New Futures” project, a series of videos inviting Black people to envision their future beyond injustice, oppression, and turbulence. Preview visuals, published on Elim’s social media, featured femme voices and bodies from across the diaspora, broadcasting what a new era for global Blackness looked and felt like, from Elim’s lens.


One of Elim’s goals was to shake up perceptions of how people working in the advocacy space should behave.

Elim wanted to challenge the idea that “just because you fight for social justice, you have to live a very tortured, impoverished, really shitty life on the backend.”

“That is not fucking true at all,” they say. “We deserve luxury, we deserve creativity, we deserve to look as fab as possible. . . . We are human and this is a holistic thing.”

A forced break from traveling and touring enabled Avis Reese, the songwriter, keyboardist, and music director of Danielle Ponder’s soul band, to work on a project she might not have been able to otherwise.


“It felt really good to have it be not just a song just for pure entertainment, but really a song that spoke to the moment that we’re in right now,” Reese says of the song, her first collaboration with the band.

Her sentiment is a common one. When the Rochester community’s focus turned almost entirely to the fight against local police brutality, artists uplifted the message of the movement in their own personal ways.

Conversations with the movement

Rapper, singer, and actor Chi The Realist, aka James Boykins, returned to Rochester from Los Angeles to join the protests. He wrote a song for the cause called “Flippin’ Shit Over,” which he calls a “battery for the revolution.”


“Protesting became such a ‘I’m getting ready to go to work’ thing,” Boykins says. “It’s emotionally draining. It’s mentally draining, especially knowing that I have to put on this gear and get ready to go out there and potentially have my life in danger. So it was like, well now that this song is done, if anybody needs anything to fuel them, I will fuel you.”

Mixed media artist and Monroe Community College faculty member Athesia Benjamin won a Wall Therapy mini-grant, which enabled her to create a mural at the Rochester Public Market. The piece is simple and vibrant: “Black lives built this country” written in black, green, and red against a white backdrop.

“That was inspired by some of these incredible handmade protest signs,” Benjamin says. “There's one sign this young man in South Carolina was holding, and it just really struck me. It said ‘“Matters” is the minimum.’ So I kind of added to that.”

Benjamin says that it’s important to honor and teach the societal contributions of Black people, beyond a mere acknowledgement that “Black lives matter.”

“I just felt so inspired to put that really radical truth — but more truth than radical — on that wall,” she says.

One of Elim’s artistic priorities in 2020 was centering on darker skinned Black femmes, who are often on the front lines of Black Lives Matter protests, and challenging perceptions placed on them by the world at large and even other activists.

“Trying to flip these notions on their head, you know, dark-skinned Black people can't be soft, or they can't be tender,” Elim says. “When people think ‘soft’ they think ‘light,’ and I'm like, ‘Why?’ I know why that is, but I’m not interested in that narrative. How do you treat people who are experiencing trauma, who are at the forefront of these things and who are now reacting to things, but then they are not allowed the space to process, be afraid, and be vulnerable?” 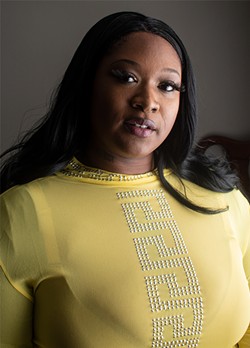 Dominique channeled the long history of oppression against Black people in her music. On her Instagram page, she previewed a song called “Maafa (Roses Remix).” In the post, over a track called “Roses,” produced by SAINt JHN, Dominique sings her take on the true story of a runaway slave while a selfie snaps in and out of focus, as if there were static interference.

“I flash images from the Black Holocaust, from slavery: people with whipped backs, people with chains on, just very horrifying images — someone hanging from a tree — and this is all in the middle of my pretty face,” she says. “That was the point.”

Dominique says she didn’t want to shy away from the reality that injustice toward Black people is ongoing.

“When I go research what happened to my people and I still see it happening today, I’m not okay,” she says. “So it was like, ‘Put this here and leave it. Don’t take it down. Don’t put it on private.’”

Irene Kannyo is a freelance writer for CITY. Feedback on this article can be directed to dkushner@rochester-citynews.com.