Pandafan takes indie rock down to its roots 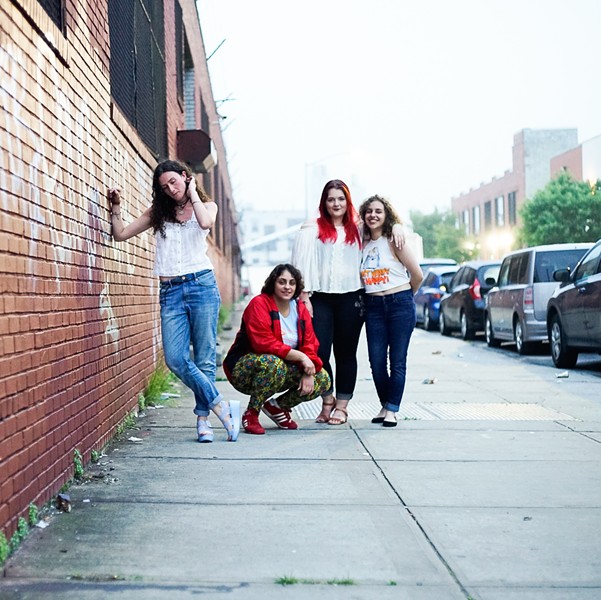 With Boy Jr. and Lucy's Mirror

When Hurricane Sandy in 2012 caused blackouts on Long Island, Grace Denatale and Delaney Hafener resorted to old-timey entertainment with their friends. They grabbed a guitar and started singing. The lights eventually came back on, and Denatale and Hafener kept playing together and developed Pandafan.

Denatale and Hafener both ended up going to SUNY Purchase, where they met bassist Emma Steen, drummer Yas Baratali, and vocalist Taylor Burgess, along with other musicians who rotate through the band.

While Denatale, Hafener, and Burgess often perform as an acoustic trio, Pandafan is also comfortable as a plugged-in setup, when Steen and Baratali join them on stage. Together, the group creates intricate harmonies that lure the listener in like mythical sirens, energetically accompanied by guitar, violin, and percussion.

Pandafan is playing the Bug Jar on Wednesday, July 25, so CITY shot Hafener and Denatale a few questions. An edited interview is below.

CITY: When did you first become interested in pursuing a music career?

Delaney Hafener: I think I always knew I wanted to do music in some capacity. It was always a question of what exactly my path would be. I started writing songs when I was about 12 or 13, and with a lot of help from my parents I started gigging and recording when I was 14 and 15. Since then I've just been hustling and doing whatever.

Grace Denatale: I never actually imagined having a singing career but I pretty much wanted to be involved in anything Delaney was involved in so when she told me I can and should sing, I took her word for it and here we are.

What experience do you want people to take away from your music?

Hafener: I think with my songs it depends on the song. Sometimes I'm expressing personal turmoil, which I want people to be able to relate to, and not feel like they're alone. Sometimes I write about relationships (of various kinds) and I've written some political and protest songs, which I think have pretty clear intentions.

Denatale: I write really personal songs, and I guess I would feel successful if someone listened to my song and, regardless of their emotional background, they'd feel for one moment what I was feeling when I wrote it.

Are there any musical influences that would surprise your audience?

Denatale: My current music taste consists of a lot of hip-hop, rap, punk, and intense techno. I don't think it consciously affects my music but I'm sure it leaks into my finished product.

Hafener: My first concert was the White Stripes when I was like 11... so.... also I saw "American Idiot" on Broadway.

What's the story behind your band name?

Hafener: It was a joke and it went too far.

Denatale: This is my least favorite question.

What has been your greatest obstacle as a band in the music industry?

Denatale: Getting the respect we deserve because we're women, though we've got pretty good at demanding it.

Hafener: I think it's hard to get attention in New York City and it's hard to play original music on Long Island, but it's where we are so we're just trying to make the best of it.

Denatale: Yeah there's a budding music scene on the island that we participate in, but a lot of the time it's hard to get mutual support.

Where is the most memorable place you've played so far, and why?

Hafener: We've played a couple of theaters, which are so nice because the stage is awesome, the sound is great, and the audience is so attentive.

Denatale: The first thing that came to mind was the Grange Hall in Machias, Maine. Super haunted and echo-y space with a super positive community. But my favorite place to play is where my friends are.

Do you have any new projects or releases coming up?

Hafener: Yes. As we write this, we're sitting in the studio finishing up recording on a new single called "November." Check out our Facebook or Spotify or Bandcamp or Instagram for word on the release.

What is your songwriting process?

Denatale: We usually write the song ourselves and then bring them to the group. We haven't written a song collaboratively in a while, but it works better this way. The collaboration comes in the pieces we add to each song, and it becomes a completely new thing from when I wrote it.

What do you do in your spare time when you're not writing, recording, or performing?

Denatale: We drink beers in the backyard.

Where do you get inspiration for your lyrics?

Hafener: Life, sometimes from stories and things I read, sometimes other people's lives. I have one song that probably sounds like it's about a romantic relationship, but it's actually about a fight between one of my parents and my uncle.

Denatale: I usually get really sudden inspiration that has to be acted on immediately or else it'll go away, which is why sometimes when people ask what my songs are about I don't really know because it was a fleeting moment when I felt that way.