Panda on Acid's 'Haoma' is meditative music with momentum 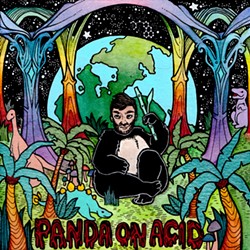 For all the feelings of desolation brought on by the coronavirus, 2020 really was a rich period for writing and recording new music. Plenty of albums, including those by Rochester artists, were released to little fanfare at the time. “Haoma,” the debut album from Panda on Acid, is one of the under-the-radar works.

Panda on Acid is composer-producer Panauh Kalayeh, a Pittsford-Mendon High school graduate who worked for over a decade in California contributing music to TV and film, and producing on hip-hop albums such as RZA’s 2008 album “Digi Snacks.” He’s since returned to Rochester, and in October released “Haoma,” which Kalayeh refers to as his “passion project.”

The album, which plays like study music for hippies, is certainly a departure. Its chill-out sensibility throughout all eight tracks is an invitation for the listener to decompress and unwind. But any temptation to label the sonic framework simply as “stoner music” would be too reductive. What makes the music stand out is its understated incorporation of a variety of nuanced styles, including reggae, post-rock, New Age and Indian classical music’s Hindustani tradition.


Kalayeh’s ability to create meditative music that maintains forward momentum is on full display with the track “Family,” on which the multi-instrumentalist plays the Persian dulcimer instrument known as the santoor. And while the album’s drum programming sounds canned and inorganic compared to its other instrumentation, “Haoma” is a refreshing and transparent trip.