Paintings glimpse the divine in the mundane

PHOTO PROVIDED "Lulu's Hair" is part of Kathy Calderwood's solo show of paintings, "The Ordinary and the Divine," currently at Rochester Contemporary.

"The Ordinary and the Divine"

As we move through life, we learn many of the same lessons everyone else has to learn, but the way those lessons reach us, and why they stick, varies widely from person to person. One of my personal favorite lessons is the power and freedom that comes through individual interpretation, which struck me during Kathy Calderwood's painting courses at Nazareth College. Calderwood's own work, which is currently on view at Rochester Contemporary, casts human behavior in an amusing light and enshrines commonplace objects.

"Kathy plumbs the emotional depths, painting through sadness and life's twists and turns," says Rochester Contemporary Executive Director, Bleu Cease. "Her hyper-realistic and archetypal paintings weave together fantasy and her own life story with a healthy dose of her quirky sense of humor."

I looked forward to Calderwood's classes like a sort of therapy retreat, where I could press pause and work through tricky experiences with my own private language of imagery. These lessons proved crucial during some years of personal upheaval, but also because until this point, my encounters with art instruction dealt entirely with technique, not concept.

Calderwood urged students to explore their experiences and relationships in symbolic terms, borrowing from Carl Jung's ideas on the collective unconscious and archetypes. Rather than painting a blatant portrait of a person, we'd explore their aspects through what models they might fit, though we found things are hardly ever cut-and-dry.

"Unpacking some of Kathy's paintings, you discover opposing aspects of a character or an archetype," Cease says. "It's as though her figures defy being too neatly represented, even by her."

For example, in the section labeled, "Hall of Suitors and Paramours," Calderwood's vision of "The Perfect Husband" has an ax in his head, and is being knocked off his pedestal. A basket floating nearby appears to hold "all of the eggs."

Her work strikes a balance between hyperrealism and cartoonish neo-surrealism, and a bit of personal mysticism is injected into each and every picture. "Monkey" is a portrait of Calderwood's first suitor, with a forlorn gaze under a sky filled with fireworks. "He picked me out at a carnival to be his girlfriend," she says. "I tried to steal him from the circus tent and keep him locked in my bedroom."

"The Narcissist" is a flaming marshmallow, being scorched by its own adoration, set into a gilded hand-mirror frame. Many of Calderwood's paintings have custom frames that add a certain something to the work, whether an ornate oval enclosing the peanut-headed Queen Elizabeth in "England If You Ask Me," or the glitter bomb that frames an assortment of objects in "Big Red Oval."

"Festoon for the Know it All" was inspired by a conversation between Calderwood and her daughter, as well as the artist's fascination with the garlands adorning European architecture. In her festoon paintings, Calderwood includes chains of imagery that alludes not only to the subject, but the subject's "loves and immediate families," she says.

Slideshow "The Ordinary and The Divine" 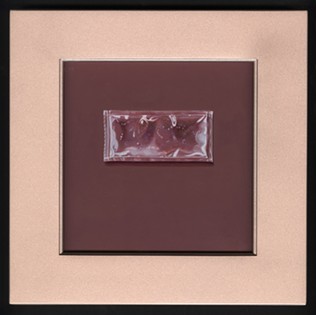 Cease says he is especially fond of Calderwood's "Sacramental Objects" paintings, such as "Packet of Nothing." This little work is a lifelike portrait of a condiment packet, free of any label and translucent except for reflected light and little bubbles in a fluid that Calderwood says might have been vinegar.

She's a collector of all manner of objects that have captured her attention. This is showcased, tragically, in two shadowboxes of burned shelves and melted knickknacks, destroyed in her studio fire two years ago.

The "Sacramental Objects" paintings are "simply bits and pieces of this world that might give one an epiphany," Calderwood says. "I painted them because I want people to take a second look." They serve to explore the thrills of wonder derived from unexpected or unlikely encounters. Calderwood lists finding a bent farthing in England, or mining for a Herkimer diamond and witnessing the first light to pass through it in 500 million years, as examples.

The series includes all manner of lovingly painted objects: a single, fragile Iris petal immortalized in its full blush; the dreamy landscape of belly fur of Calderwood's cat, Pickle; a ring of golden hair; and a wee painting of a single pearl so utterly perfect that you'll believe could reach out and pluck it from the picture.

Each of the objects are painted with painstaking precision, yet Calderwood has given them some other unnamable quality as well. Her focus not only perfectly replicates the light passing through the strange translucent rubber of a familiar toy in "Wonder Ball," the object also becomes otherworldly.