Painting for the people

Rochester loves its murals. Art adorns walls all over the city, from the sprawling, eccentric images created by WALL\THERAPY's annual roster of visiting and local artists to Shawn Dunwoody's inspirational community projects in the Fruit Belt and JOSANA neighborhoods. There's something seemingly simple about putting paint on a wall, and yet it has the power to transform a place — not just the way it looks, but how we feel about it. And a new, literary-focused mural installation that has sprung up in the 19th Ward, is the latest community-oriented work by artist and homeless advocate Richmond Futch Jr.

As you head down Arnett Boulevard, vibrant colors pop from the surface of the tall, narrow panels that form the facade of the Arnett Branch Library. Images of book spines depicting illustrations of influential works of literature for children and adults alike, as well as biographies on local historical titans Frederick Douglass and Susan B. Anthony, wrap around each of the corners at the front of the building. Cultural touchstones abound, including such titles as Ezra Jack Keats's "The Snowy Day," Roald Dahl's "James and the Giant Peach," C. S. Lewis's "The Chronicles of Narnia," Arthur Conan Doyle's "The Adventures of Sherlock Holmes," and Shakespeare's "Romeo and Juliet." 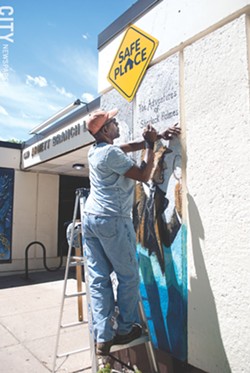 The building's transformation has been powerful. The once nondescript and barren outside walls of the library now welcome passersby to activate their imaginations and intellectual curiosity, and join the lively community within.

Futch was commissioned to complete the project by patrons from various community organizations. The artist has had a long relationship with the branch — multiple murals by Futch already grace the inside of the building. These include the sheening, yellow-gold map of literary locales titled "Destinations" and the depictions of lush vegetation and vines that hang on the walls of the children's section of the library. Futch donated these works, with the library helping to supply materials.

So when Arnett Branch Library patron Karen D'Agostino approached the branch about commissioning an artist to create art for the library in dedication to her late mother Violet Keating, the choice was clear. Futch was engaged to paint what would become the first eight panels of the mural, and a public dedication took place in October 2017. Support for the project grew —among the Friends & Foundation of the Rochester Public Library as well as groups such as Rochester Pedal Tours and His Branches ministry — and additional works were commissioned, culminating in a total of 22 panels. The mural was completed in late June of this year, with a reception celebrating the achievement held on June 28.

Arnett Branch Supervisor and Children's Librarian Bruce Tehan has noticed the impact the art has already had: "It brings beauty to our wonderful neighborhood," he says. "It sparks interest in books and reading, and it draws attention to our library and all the important things the library has to offer. For instance, I overheard one lady talking on her phone arranging for a relative to pick her up from the library. As she was describing the Arnett Branch Library's location, she said something like, 'You can't miss it. It has big beautiful books on it!'"

Tehan also notes that the mural invokes fond memories of beloved books that library visitors have enjoyed since childhood. As the mural expanded, some patrons enjoyed venturing guesses as to which book titles would appear next.

These responses seem fitting for long-time Rochesterian Futch, a soft-spoken and passionate artist originally from Sanford, Florida who loves telling stories, but prefers to let his work do the talking.

"I think art also crosses all boundaries and stirs up your past, your history, your thoughts, images," Futch says. "It evokes something, especially when you see it in a large scale and it's always there. Then you can go back and watch it, and walk by it, and it evokes memories. That's why art is a powerful tool, image, vision."

And though the vision for the mural belongs to Futch, it was far from a solo project. He enlisted fellow artist Chloe Smith, who he met while sharing a studio space, to help realize the work. Smith's skill at detailed, character-driven portraiture, showcased here in her depiction of a stoic yet resolute Frederick Douglass, proved invaluable.

"She has a very unique style," Futch says of Smith. "I love her work, and I wanted her to get in there and balance it out for me."

Smith sees her involvement as a way to enrich her community. "I think when you go to a very beautiful place with a lot of art and architecture and stuff, you just feel like you want to be there," she says. "I would love to have that impact on Rochester and make it more of a beautiful place to be."

Futch and Smith were also aided by Ebony Singleton, a student at Edison Career and Technology High School and an aspiring artist, who met Futch through her grandfather, Bishop David J. Singleton.

"The most eye-opening aspect for me is that anybody can do anything they love and keep pushing and make it a career if that's how far they want to take it," Ebony Singleton says. "Now I work with a real artist perspective because of the advice he has given me," she says of Futch's mentorship.

As a primarily self-taught artist, Futch began his creative journey in fifth grade here in Rochester, when he would attend weekly art classes at the Memorial Art Gallery. Now, his community involvement extends beyond the walls of the MAG and the Arnett Branch Library.

A deeply spiritual man, the artist began his Christian ministry "Artistically Revealing the Spirit," or A.R.T.S., as a means to express his worship of God. Futch has frequently joined musicians onstage at churches and other gatherings, painting during the "praise and worship" portion of services.

Futch sees art as a prophetic tool, a way of communicating God's word in order to bring out the best in ourselves, others, and God's creation as a whole. "I'm showing what the Spirit's saying artistically, from what I feel in my soul," he says. "It's just a visual expression of what the Spirit is saying for me."

The painter, a member of Bethel Christian Fellowship, started his ministry over a decade ago when a prophet in the Christian community had a word for Futch, repeatedly asking him to create art as part of church worship, for the glory of God. That was the beginning of his focus on service.

Futch says he has always had empathy for the homeless community, and in recent years has converted that concern into meaningful relationships. He has worked as a volunteer at St. Joseph's House of Hospitality, spending some nights there to manage the building, getting to know the community members, and coming to be known as "The Artist." He also helps the friends he's made there to find sustainable employment in the community. "I need to be in the culture, I need to be a part of the people," he says.

In 2016 Futch teamed up with artist Debra VanWert-Sneeringer of RocCityART, a company that promotes local artists, to create the Rochester Revelation Art Center as an outreach to the city's homeless population. Every Wednesday morning from 9:30 a.m. to 12:30 p.m., Futch hosts a workshop called "Revelation Rochester — Revealing the Artist Within," at the House of Hospitality. All are invited to come and create, and attendees, called Revelation Artists, receive artistic instruction if they desire it.

Futch sees the workshop as an important way to create a space for peace and tranquility, even if only for the moment, in the lives of homeless people.

"Art for me is a way of telling a story, for me to communicate," he says. "And I know it transcends relationships. That's one of the reasons why I use art with the homeless, because I know that art can bring certain things out in a person."

The workshop is not just about nurturing creativity in others, but about creating authentic relationships with members of a systematically marginalized community. The creative fruits of these connections will be on display at Futch's Village Gate studio this fall in an exhibition entitled "Making the Invisible, Visible Through Art." Additional information about the initiative and related projects, as well as images from the forthcoming exhibition, can be found at revelationrochester.com.

The show will feature not only Futch's own work — which will include a beautiful yet startling, azure landscape painting of the Tent City homeless encampment on South Avenue and insightful, life-affirming portraits of people in the homeless community — but also the artwork of workshop attendees.

"I want the city to know that there's beauty within this culture, in this community," Futch says. "Those are people. They're not just homeless guys and women, those are human beings. They're people who have challenges in their lives; they're not just castoffs."