By Rebecca Rafferty and David Andreatta

The department released the video immediately after members of the city’s Police Accountability Board held a news conference to describe the video, which they said they had viewed Thursday night after receiving it from City Council President Loretta Scott.

The incident took place on Portland Avenue on Feb. 22 and involved two officers whom the Police Accountability Board said played a role in the pepper-spraying of a 9-year-old girl on Harris Street three weeks earlier. The board declined to identify the officers.

Board members were quick to draw parallels between the two incidents, with the one on Harris Street having made international news and raised questions about department guidelines for dealing with children.

“There are troubling parallels between this new incident and the one on Harris Street that occurred just a few weeks earlier,” Police Accountability Board Chair Shani Wilson said at the news conference. “Both incidents involved Black mothers. Both involved Black children. Both involved Black people obviously in crisis. Both involved officers using pepper spray on or around a Black child. Both appear to have not involved the Person in Crisis Team, the Family and Crisis Intervention Team, or mental health professionals.”

The Person in Crisis (PIC) Team consists of social workers and mental health professionals who respond to calls for persons in distress. It was not immediately clear whether the PIC Team, which is still a pilot program, was summoned or whether it could have been deployed to a call for a suspected shoplifter.

At one point in the video, an officer can be heard referencing "FACIT," the Family and Crisis Intervention Team, saying the team is "not logged in."

“The goal was mainly to call FACIT and have someone follow up," Herriott-Sullivan said. "It’s rare that they would go to a scene like that.”


Speaking at the same news conference, Executive Deputy Chief Andre Anderson said the matter was under investigation and that, "We’re cognizant of the fact that we want to make sure that our initial response is one that merits respect in the community."

Officers responded to Portland Avenue for a call of a woman shoplifting from a drugstore. The footage shows the woman opening her purse for a male officer to inspect and denying stealing anything. When he tells her that she and her child would need to get in his car so he could verify with the store if she was the person seen shoplifting, she flees with her child in her arms to a nearby storefront.

The officer catches up with her and, after instructing her to put her daughter down, attempts to handcuff her. It is unclear from the footage when the pepper-spray was deployed and where the girl was in proximity to it being discharged.

The girl can be heard screaming for her mother and officers can be heard ordering the woman to "stop resisting." The woman kept saying "I didn't do anything" and "I'm sorry." 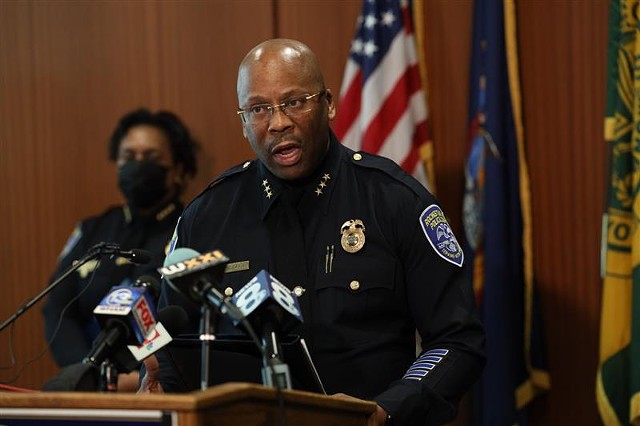 The Police Department issued a statement saying that the child was not pepper-sprayed or injured during the altercation.

The Police Accountability Board's executive director, Conor Dwyer Reynolds, said the board reviewed 20 different pieces of footage, including from police body-worn cameras, video taken by a passerby, and a private security camera, and that it appeared the girl was being held by her mother when the woman was pepper-sprayed.

The Police Accountability Board declined to release the video footage it viewed, members said, because the board did not have the capability to redact images that may compromise the woman and her daughter’s privacy.

“The security camera appears to show the mother holding on to the child with one hand at the time that the pepper spray incident happens,” Reynolds said.

Board members condemned the officers’ handling of the incident, saying that police need more sensitivity and de-escalation training, especially in their interactions with Black and brown people. They also said how police handle situations with children needed to be reformed.

“We would like to see more empathy involved,” PAB member Ricky Harvey said. “There was a 3-year-old child present. The officers are there to protect the businesses, yes, but the citizens as well.”
Police Accountability Board statement Board members also said they were troubled by what they characterized as police intimidation of a bystander who was making a video recording of the incident. The officer told the bystander to “shut the hell up and get out of here,” according to a statement from the PAB. Officers also blocked the incident from view with a police cruiser, the board members alleged.

In its statement, the Police Department said the woman was charged with trespassing and issued an appearance ticket, and that an officer was placed on administrative duty pending an internal investigation.

Mayor Lovely Warren, in a prepared statement,  called the video “disturbing” and said, “When incidents like this occur, I am relieved that I ensured body-worn cameras are worn by our police, so that we can see what occurs on our streets and hold officers accountable.”

During their news conference, PAB members pointed out that this body-cam footage would not have come to light if one of the members had not seen the bystander’s recording of the incident posted on social media. PAB members reached out to and received the body-cam footage from City Council President Loretta Scott.

“City officials knew a week ago that this footage existed,” Reynolds said. “And the fact that the Police Accountability Board wasn’t notified despite the fact that we have an open investigation involving some of these same officers and these same topics — the footage should have been handed to us.”

Warren ordered the suspension of the four officers involved in the Harris Street incident. As of Feb. 12, Officer Alexander Lombard was suspended, and Officers Chad Brady, Adam Bradstreet, and Hannah Schneeberger were placed on administrative duty.

Responding to a reporter's question during her news conference, Herriott-Sullivan sought to draw a distinction between officers being "involved" and being "on  scene."

She said she could not immediately confirm whether any of the officers present during the Harris Street incident were present on Portland Street, but acknowledged that they could have been.

"I'm sure they very well may have been on scene for a time, but whether they were involved in the incident itself, they are two separate things," Herriott-Sullivan said.

Rebecca Rafferty is the CITY Life editor. She can be reached at rrafferty@rochester-citynews.com.