One of humanity's defining qualities is our power of abstraction. We reflect on the past and fret over the future, and make up stories to help us understand natural phenomena and human behavior. Some of these stories fade into history as scientific explanations take their places, while others become religions.

Oxford Gallery's annual themed show this year focuses on "Myths and Mythologies," and offers dozens of works by artists who explore familiar or obscure myths as well as some that we keep on telling ourselves are true.

Myths often reflect our multi-cultural obsession with and pursuit of women's youth and beauty, and those stories act as cautionary tales for women who step out of line.

Near the entrance of the gallery is Karl Heerdt's ominous portrait of "Pandora." Long before Pandora was an auto-DJ program that introduced you to new music, she was sort of like the Greek's version of Eve: the first human woman created by the gods, who disobeyed when instructed not to do one specific thing. Heerdt's work envisions Pandora as a young girl, her face silhouetted warmly by wonder and the whispering fire visible under the cracked lid of the box.

Across the space, Leonda Finke's "Exile I: Expulsion of Eve" is a small cast-bronze sculpture of the god-forsaken woman walking away from a totalitarian paradise. Interestingly, she is alone. The scale of the work emphasizes her vulnerability in a wide-open, unknown world, and she covers her face in grief.

Dario Tazzioli's immaculately detailed marble sculpture, "Daphne," comes from one of Ovid's "Metamorphoses" stories: When hounded by the unwanted attention of relentless Apollo, the nymph Daphne begged her river god father for help. Dad's answer was to turn her into a laurel tree (and the disappointed Apollo, being the god of poetry among other things, used the laurel branches to honor future poets. Poet Laureate. There you go).

Many other artists have captured this moment of transformation, and like Tazzioli, imagined the nymph as a whirlwind of flesh and branch, splaying hair and a tumble of leaves. What I love about this version is that Daphne's feet also plunge into the ground as roots, underscoring the permanence of the transformation.

Other figures from myth are identifiable from trappings of their stories: Sari Gaby's lovely "Persephone" considers the jewel-like pomegranate cupped in her hands; nearby Gaby's still life of the dooming fruit glistens alluringly. Why is it always fruit?

Anthony Dungan's "Medusa" is an expressive figurative work of shifting warm and cool colors, a quiet conflict between hybrid natures. Restive blue snakes coil about her head like ram's horns, framing a stare that is as indifferent as stone.

Wayne Williams' welded-steel "Icarus" combines a simple frame-worked body with wings of many delicate, fabricated feathers. Instead of a graceful fall, Williams has perfectly captured the clumsy tumble with an awkward splay of limbs and a shocked expression.

Doug Whitfield's "Triple Goddess" brought me back to my first visit to Oxford Gallery, which was to see Whitfield's solo show more than a decade ago. Here, he depicts the pagan concept of three stages of womanhood — maiden, mother, crone — each on a separate panel of a wooden screen, connected by their interwoven arms and whimsical details.

Each woman is paired with her respective moon stage (new crescent, full moon, old crescent), and the mother of course holds a baby. Whitfield's work combines loose renderings of full-figured bodies with sharply detailed faces, hands, and feet. And the expressions are amusingly perfect — there is flirtation in the maiden's eye, a nurturing calm in the mother's face, and a knowing expression in the smirk of the crone. 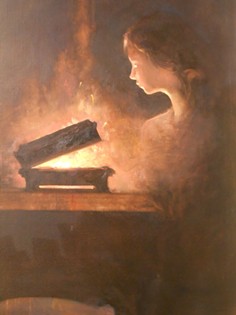 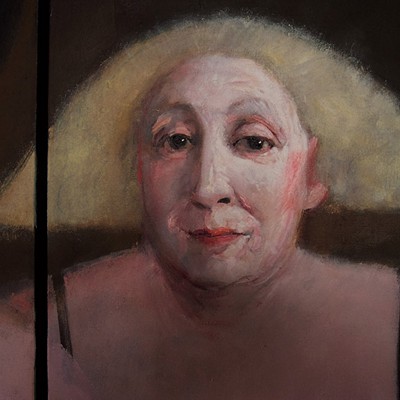 "Myths and Mythologies"
By Rebecca Rafferty
Click to View 11 slides

Among the many works that consider the non-human aspects of myth are Jappie King Black's "Harpy," a wall-mounted sculpture of grapevine bark, wax, and fiber; Tony Putnam's wee bronze "Moon's Animals," which features the heads of a unicorn, stag, and goat mounted on a sort of cart; and Ray Easton's "Huginn and Muninn," a striking portrait of Odin's crows, whose names mean "thought" and "memory," conversing on a moonlit branch.

Other artists represented the intangible bit of lore. Alice Chen's small and narrow "Mystical Path" is an elegant little marbled ink work that evokes smoke, mist, and the spirit world. Alan Singer's print, "Uninvited Guest: Underworld," combines realism with the ineffable — strange figures circle another figure that seems to emerge from a box-portal in a seaside setting. The inaccessibility of the scene feels perfect, exactly as perturbing as glimpsing a hint of some higher dimensional beings.

American lore is represented in a handful of works, but most meaningfully in Ryan Schroeder's "Trickle Down Economics." I've never before seen a sneer so effectively clothe itself in oil and linen — the painting depicts a ramshackle of a room with a rotten floor, boarded windows, peeling walls, and a crush of garbage strewn about the floor. The angled tilt of the painting's perspective emphasizes the instability of the titular myth.