During each holiday season, Oxford Gallery presents a showcase of some of the best work of the past year by artists it represents. In addition to displaying previously shown pieces, this year, owner James Hall also invited the artists to submit new work. Featuring pieces by more than 45 artists working in a wide variety of styles and media, the "Holiday Exhibit" really shows off the range of tastes and talents of Oxford Gallery's associated artists.

Among the re-shown work is Chris Baker's chalky gouache painting "St. Paul's Cathedral." Baker absolutely excels at simulating atmosphere, and is an expert and unique colorist as well. Here, this small waterfront painting is dominated by a creamy, pastel lime soup of sky and water, through which a boat tows a low burden in front of the cityscape in the distance.

It's hard to imagine Baker's newer work, "Blacksmith Shop," painted with something other than his chosen gouache, because the matte medium lends itself so well to the depicted dusty interior. Leaning stacks of workshop accoutrements and snaking, carroty power cords lead the eye through the dim space to the bleaching sunlight from the open far side. Baker has this great capacity to imbue even mundane subject matter with warm, nostalgic connotations about the family handy person. 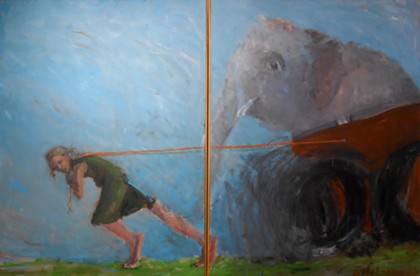 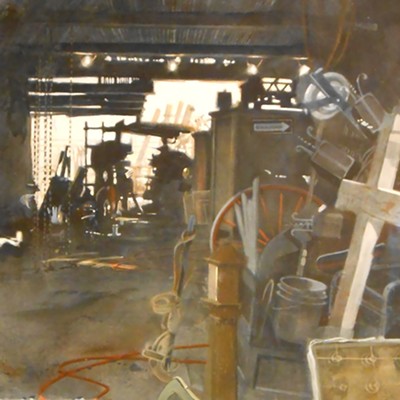 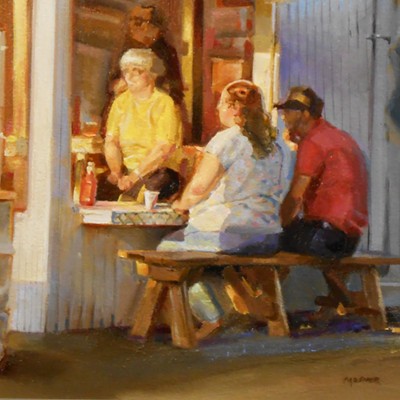 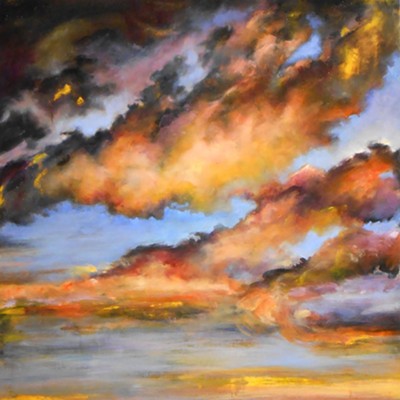 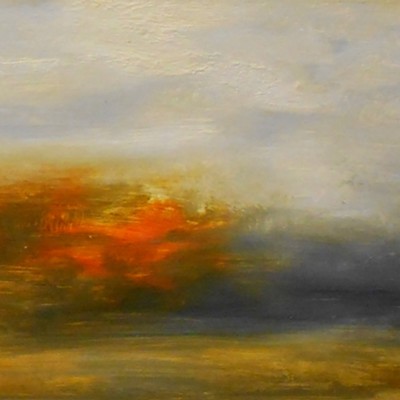 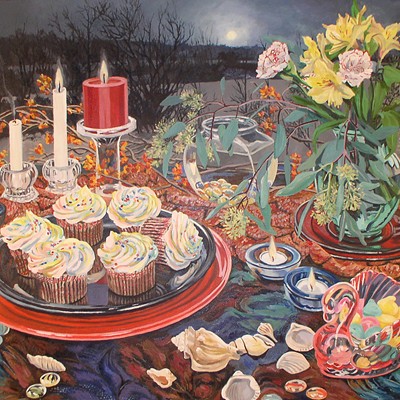 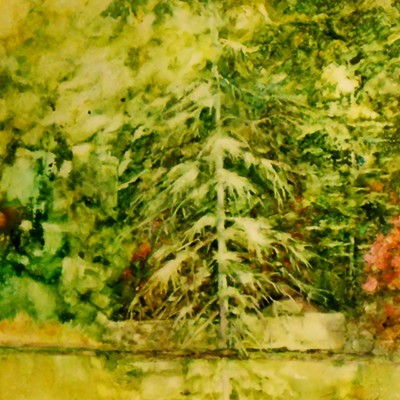 Planted nearby on a pedestal, Nancy Jurs' ceramic, totem-like "Mystery" sculpture seems like an object you'd stumble upon in the forest and perceive human attributes in its blocky body. Jurs gave the roughhewn piece the vaguest eyes and mouth markings, creating the effect of a stone sprite peering back at its viewers. Her other work in this show, "Vitality," is torso- and heart-shaped, with weathered markings and a faint, sacred shimmer.

Jacquie Germanow's ceramic "Healing Stone" sculpture has a similarly sanctified look about it. Adorned with a shell and simulated wood grain, the ocular-like central form is positioned slightly askew on its trunky pedestal, as if turning on to scan some curiosity in its environment.

Adamant, child-like fancies are explored in Amy McLaren's new acrylic diptych, "Wherever I Go, She Goes." The large panels are divided along the bracing ankle of the girl, at left, who is towing a big cart with an intangible gray elephant, at right. The girl's beast of a burden is rendered in the brushy strokes of imagination. If we inject a bit of connotation into the image, we can think of the subject as struggling to abide with a matter no one else wants to address.

Ryan Schroeder's "Untitled Interior #1" pictures the good bones of an empty old house. A stark and remarkable sketch in oil, Schroeder's painting has beautifully captured all of the unexpected hues to be found in a bare space, expertly urging form from light falling on planes and corners receding into shadows of gray-greens and rich, bruised blues. 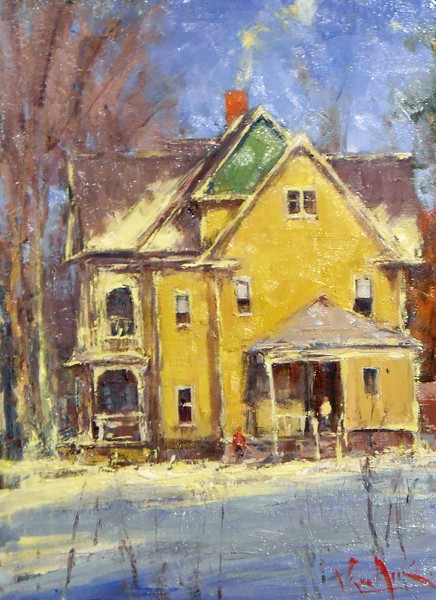 I can't say I was dismayed to have another look at the previously shown work in this exhibit. George Van Hook's oil, "The Yellow House in Snow," is an impossibly cheerful vision of a bright mustard dwelling against a bitter, crisp sky and snow-smothered yard. The puff of smoke from the chimney and tiny figures on the porch and lawn imbue the scene with a certain coziness.

Sharon Gordon's tiny oil painting, "Fiery I," is a dreamy vision of fleeting terrain, as though spied from a car passing swiftly through a rural environment. The title comes from the well-placed burst of orange moving off-plane, conveying a blink-and-you-missed-it glimpse of tawny foliage. I saw the last throes of autumn against a creamy sky and darker woods, but Gordon's abstract little wonders are seen differently by each viewer.

Another dreamy scene, this time moonlit, is Fran Noonan's, "Roused." The small oil painting certainly speaks of (and stimulates) stirrings of the heart and spirit. At center, a dense cluster grove of trees stands aside a curving stream, and though the piece is dusky, it's subtly filled with an enchanting glow of color along wispy foliage, fading into the atmosphere.

Though there are many themes to be observed among the show's many works, Anthony Dungan's large acrylic painting, "The Birth of Awareness," is unlike anything else in the exhibit. A figure is chaotically sketched out amid violent bursts of pigment, defying containment within boxy forms. The head is turned away from a dramatic, kinetic crash of color, and heavy, relatable emotion is legible on the face. The image belies the seemingly uplifting title, while also affirming it. Transformation is depicted here as painful and overwhelming, even frightening at its birth, but with hints at the endless potential of shaping that chaos, once we acknowledge our own agency within it.