Out with the new, in with the old? 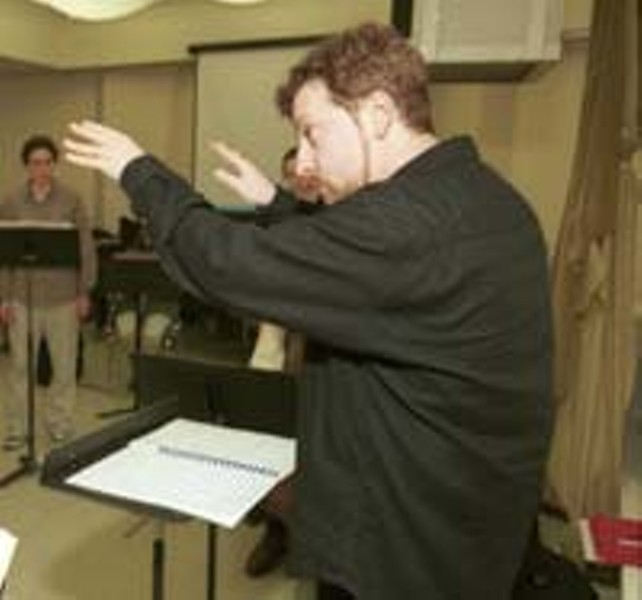 Photograph by Kurt Brownell Rooted in, and rooting for, the musical past and present: conductor Brad Lubman.

Call it an endless melody or the same old song. By any name, it's a recurrent dilemma that dogs the concert world.

Here's the A theme: Symphony orchestras are alienating us with "difficult," dissonant program choices. Hold your ears and complain loudly.

Or the B theme: Orchestras must strive to please. It's the standard repertoire or extinction. Bring on the warhorses.

Symphony orchestras are still making it. The American Symphony Orchestra League reports the post-9/11 recession and political climate "dampened nearly a decade of growth for America's orchestras." The Rochester Philharmonic's 2003-2004 season was decent, though. The budget had a small surplus, and the 28-concert "Philharmonic Series" drew 40,800 listeners.

Still, "these continue to be challenging times," says the RPO. And growth is necessary. So the argument over programming stays alive.

The RPO has to live with the fallout. Read all about it in the morning paper: One letter-to-the-editor assails the RPO for playing "biting" pieces; another letter questions the accuser's listening skills. Tune in again next month.

The RPO has launched a pre-emptive defense. "There are of course the old, the exclusively new and a blending of centuries within every era," says a "History of Music" page (www.rpo.org) by Lynne S. Mazza. "We must be open to new styles, new ideas and new sounds... Try not to automatically assume that you won't like a work because it was written in the 20th or 21st centuries."

That addresses the A theme. But what about theme B?

RPO Music Director Christopher Seaman, the orchestra's point man and pincushion, took this up last October, in a Concert Companion installment for WXXI radio. "Musicians and critics, and even some audience members, have a habit of dismissing certain pieces as old warhorses," he said. "I suppose the idea is that works such as Beethoven's Fifth [Symphony] or Ravel's Bolero have been trotted out on the concert stage once too often and are showing signs of fatigue. Well, I don't buy that kind of intellectualism." Works like these are popular, he said, because they're "so good, and because the music moves them in some vital way."

Seaman then played recorded excerpts of Tchaikovsky's first piano concerto --- a Clydesdale among warhorses, the jaded critic might say. That's to be expected. Like most other US orchestras these days, the RPO makes many safe choices. Yet it would be wrong to assume the RPO is overindulging in Haydn, Mozart, and the Three Bs. It's more complicated than that.

Look at the 2003-2004 Philharmonic Series (excluding pops concerts, and the like). The 15-program schedule has plenty of Beethoven, admittedly: the first and fifth piano concertos, the Triple Concerto, and more. Not to mention a "Beloved Beethoven" program. There's Mozart, too: a symphony, a violin concerto, and the clarinet concerto --- not exactly saturation coverage.

Brahms, Schumann, Chopin, Mendelssohn, Tchaikovsky, and other greats are on the 2003-04 agenda, as well.

But the line-up is heavy with 20th-century "masters" --- some of them born in, or stylistically of the 19th century. This group includes Ralph Vaughan Williams, Benjamin Britten, Leonard Bernstein, Sergei Prokofiev, Paul Hindemith, and Jean Sibelius. Actual contemporaries are on the bill, too: John Corigliano, Michael Torke, and several others. You won't find the true avant garde, though.

Even warhorses evolve; yesterday's rough beast can become today's favorite. But for orchestras, a categorical imperative --- pleasing harmonies and "take-home" melodies --- remains in force. You may have to go elsewhere for old revolutionaries like John Cage. A monster tautology is at work: The orchestra, essentially an 18th/19th-century creature, lives symbiotically with the music created during its heyday. Is it fair to ask it to change its spots?

At the RPO, such questions fall to Bret Dorhout, director of artistic operations. "Christopher Seaman tries to put a season together with balance," Dorhout says. "We have an obligation to play the core warhorses. Otherwise where will people hear them live?" The accent here is on "live" --- something qualitatively different from recorded music. "If you've ever gone to live a concert, then bought the CD, you can't re-create the experience," he says.

"You're always going to get different reactions," Dorhout says. "We get letters from both sides." The RPO doesn't usually perform experimental music, he says. In any case, the accent is on education, as with Seaman's pre-concert chats.

It's a sure-fire approach: With greater familiarity comes affection.

RPO education and outreach director Adrienne Valencia tells how it works in the schools. "I can honestly say children are open to listening to different styles of music," she says. "Last year we actually programmed a short piece by Arnold Schoenberg."

The early-20th-century atonal work for chamber orchestra made a big impression, says Valencia. "The children thought it was new and different and unusual."

"Rochester, as we well know, is musically conservative," says Ruth Cahn, an Eastman School of Music professor who directs the school's summer session.

"I really want today's music performed," says Cahn, who was an RPO percussionist for 30-plus years. But she makes concessions. For example, she says "theme concerts" can give listeners "a little something to hold on to." But she recalls being horrified when a top-shelf orchestra did a "Music for Lovers" LP decades ago. (The RPO attaches labels like "Soul of the Viola" or "Mozart, Magic and Mahler" to some concerts.)

"I hate to say this, but we're not doing a good enough job of teaching people how to listen," says Cahn. She says her experiences with Rochester city school kids indicate young people like challenging music. J.S. Bach, for instance. "Invariably, these kids who never heard anything like Bach loved it," she says. They told her Bach gave them "peace of mind" --- and she observes that living composers like minimalist Steve Reich can do the same.

Today's young musicians, says Cahn, have eclectic tastes --- everything from jazz to world music. "There are few here [at Eastman] who have the taste for orchestral music I had when I was a student," she says. "I think adaptation is the key, and flexibility. Maybe the orchestra will be a group of musicians who will 'break out' more" in smaller ensembles and venues. (The RPO, committed from the beginning to education and community service, already is well along this path.)

Eastman prof Brad Lubman, a composer and conductor who leads the cutting-edge Musica Nova ensemble, offers a friendly critique. "The orchestra," he says, "has become more of a museum than ever before." He cites the counter-example of Arturo Toscanini, a conductor immersed in the new music of his time --- like Puccini.

Lubman says his own background "is as classical as anybody's." But he wants orchestras to "loosen up." He'd like them to stop wearing formal attire, for one thing. "Musical culture is always moving ahead."

Though he has great respect for orchestral musicians' professionalism, Lubman wonders if too great an emphasis on "refinement" might hurt "the live product." He looks almost enviously to the pop music world, where "the inner feelings are completely out in the open."

He muses on the audience, too. "They come with a preconceived notion of what music should be," he charges. Imagine, he says, eating pizza every day and never trying Thai.