Art Feature: Out of place

"State of the City: Whose Space? Our Space!" 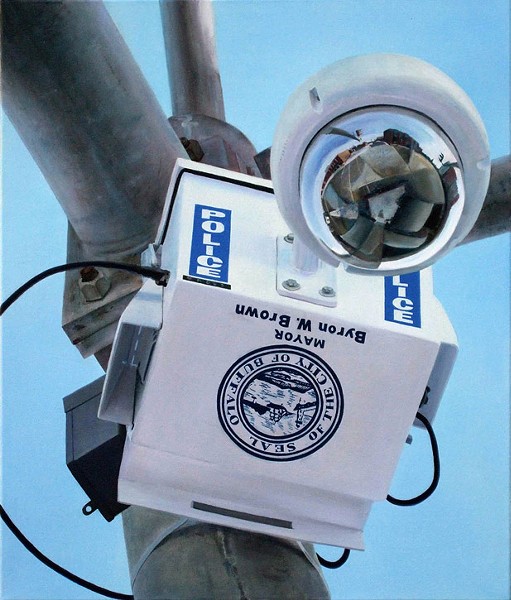 PHOTO PROVIDED "Main and Allen," one of James Paulsen's works in "Whose Space? Our Space!" now on view at Rochester Contemporary.

Immediately following its annual fundraising, crowd-pleasing "6x6" exhibition, Rochester Contemporary has deftly shifted gears to present the annual "State of the City" show, during which the art space transforms into a forum for discussing the status of Upstate New York cities as they move toward an uncertain future. Last year, the exhibit explored urban planning and the impact of the Inner Loop on Rochester (and how similar roadways impacted other cities), as well as the disputed future of the roadway. This year, the show focuses on how artists and activists are redefining public space.

While the title "Whose Space? Our Space!" is a nod to familiar protest chants, the show is not specifically about protest. The Occupy movement was a kick-off point for the show, which deals with "the way that our cities are sort of grappling with new definitions and challenges to what is public and what is private," says Rochester Contemporary Director Bleu Cease. The exhibit includes an installation of a camping tent used by activist group Occupy Rochester and a documentary video on the movement created by Indymedia.

Cease sees this show as divided into two categories: the first including artists who deal with "the surveillance/security/protest question" in a serious manner, he says, and those who tackle the issue of the use and transformation of space with absurdity and humor. The former group includes activist group Occupy Rochester, Rochester photographer Jim Day, Salt Lake City dance-theater group InFluxdance, and Albany-based painter James Paulsen, while the latter includes Syracuse artist Matthew Keeney and Rochester performance and musical duo The Bloody Noes.

The aim of the Indymedia video is to "bring in a little sampling of how Occupy, in its local iteration, changed our notion of what public space is," says Cease, who worked with Indymedia to pull video together footage of the most relevant and often tense moments during Occupy Rochester's months-long residency in Washington Square Park. These clips include arrests of those who remained after the park closed at 11 p.m., and the temporary resolution: that one-third of the park would be set aside for occupiers to camp out.

"There's this sort of give-and-take and push-and-pull and redefinition of what that park was, and now maybe we think of it differently after Occupy," say Cease. "We certainly never will think of a tent in an urban setting in the same way." The end of the video shows a once-again vacant park, the trampled grass growing and re-greening.

This is the first gallery exhibition for Jim Day, who has been active in journalistic and commercial photography, as well as in pursuing his own projects. His part in this show includes several 3D inkjet prints of some of Rochester's "iconic, historic, and confused public spaces," per the provided statement. 3D glasses are provided so that viewers can translate the murky messes into the cleverly shot images. In choosing specific angles and perspectives, Day maximizes the impact of making viewers feel they are truly standing in these dusky, abandoned downtown scenes.

The photos each lend a fragile beauty to a nighttime Rochester scene, including Washington Square Park, the lonely Amtrak platform at the train station, and the defunct subway entrance on Court Street near Dinosaur Bar-B-Que. The latter image is one of the most striking: the scene is divided between the pitchy tunnel below and the glare of the city above by a broken slab of concrete, through which twisty re-bar bits poke out directly at the viewer.

During an artistic residency in Buffalo, James Paulsen created "Transformation of the Public Sphere," a series of detailed, realist portraits of police cameras, reacting to the sudden appearance of 56 wireless surveillance cameras on street corners in our neighboring city. The police cams bear the city seal and the name of the mayor, and have the ominous look of a sentient, futuristic robot. Each image is titled with the name of the intersection it monitors and gives the context of setting either in the background, where the artist has zoomed out from the camera boxes, or in the bubbly, distorted reflection of the spherical camera casing. Ironically, most of the scenes are devoid of people, except in the case of cars caught in transit.

InFluxdance's installation includes small photos of the performers in action, a chart that explains their ideas about dance as a medium for social change, and two videos positioned on side-by-side screens. The left video shows black-and-white footage and stills of various historic protests, in which students gathered, picket lines formed, chants echoed, vigils took place, and officers dragged activists off-scene. On the right is a documentary of the troupe's piece "Justice for Some," which explores how the terms "activist" and "movement" are related to physically becoming part of social change.

The world we live in is increasingly image-based, explains the speaker in the video, but our activism in social media is actually passive, "disembodied protest." "Justice for Some" seeks to "drop" different concepts "into the body," such as same-sex marriage or human trafficking, observe emotional biases through physical movement (which the group calls "body intellect"), bring concerns to the surface, deconstruct the issues, and then "create honest movement," seeking to present different sides of the issues. The visuals include bodies moving alone or in groups, in unison or erratically, providing a vision of a more compassionate than combative protest.

Noise-music duo The Bloody Noes is made up of DJ Cardboard and MC Drywall, who are behind the annual Santanalia Pageant and other theatrical plays, and the Dude Symposium, which brought together contemporary dude theorists last year. "They just have this whole other world they live in, for their construction and their performance," says Cease. The way the duo engages to transform public space "is through their own action, rather than some of the other people in the exhibition who are documenting other people's transformation, or lamenting perhaps other types of transformations of public space."

The Bloody Noes' contribution to this show is a contraption entitled "MbSnUt (Mobile Sanctification Unit)," made of carts, wire, flags, constructed pets, and many other bits and pieces. Eerie music drifts out from a backpack set up behind the installation. I won't begin to try to explain the piece, because the Noes' work is about storytelling. The physical work is intriguing, but not actually relevant until the clever, imaginative duo contextualizes it in a performance piece. See The Bloody Noes activate the sculpture on September 21 at 6 p.m., in the street in front of Rochester Contemporary.

Matthew Keeney's lighthearted work is also about how his physical presence alters public spaces. One wall of the gallery holds 20 images of the artist in a white cover-all suit, nonchalantly yet conspicuously standing between poles, behind trees, crouching beneath sculptures, or just laying down below a shelf of produce. Though the suit ensures that he never blends in to these environments, he would be pretty easy to ignore if you passed him crouching on a staircase — but using one of the payphones he's smushed himself between is another story. The images cause the viewer to ponder how many times Keeney freaked people out by merely standing there, innocuously out of place, or if he was asked to leave by store owners or authorities.