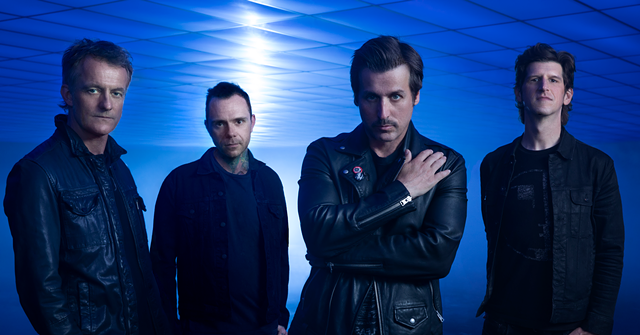 I first became a fan of Canadian rock band Our Lady Peace in high school back in 2001, when a friend introduced me to the recently released album “Spiritual Machines.” Twenty years later, the band is not only still kicking, but it has emerged from the pandemic’s isolation with new music and a slate of live performances.

The group, which was an alt-rock fixture on the Canadian and American charts in the late-’90s and early-2000s, is about to release the sequel “Spiritual Machines 2” as an NFT, or non-fungible token, via the digital platform S!NG later this month. The 10,000 limited-edition NFTs include the complete album, song demos, and stems from the studio recording process, as well as one-of-a-kind artwork. “Spiritual Machines 2” will be released on digital streaming platforms on Jan. 28, 2022.

Throughout the two decades between “Spiritual Machines” albums, Our Lady Peace has constantly felt cathartic uplift in the face of adversity, a sense of which permeates the lyrics and music. Frontman Raine Maida’s lyrics have always taken on an inspirational, self-help quality, and the music mirrors this ultimately hopeful outlook.


“Knowing him for as long as I have, there has always been a dark and a light — a cynicism, yet there’s hope at the end of the tunnel,” says bassist Duncan Coutts of Maida.

This positivity has continued with the highly danceable single “Stop Making Stupid People Famous” — released as an NFT on Oct. 29 — and the philanthropic campaign it inspired, Future Famous.

Rather than playing festivals or large arenas, the quartet is currently touring more intimate clubs throughout the United States — including a stop at Rochester’s Photo City Music Hall on Tuesday, Nov. 9 — as a warm-up to a larger stint of live shows next year. Digital collectibles are being made available at each show.

Playing cozier venues may seem like an odd fit for a band that has had considerable success and longevity. But it was a deliberate decision to find “all small, down-and-dirty places to play,” says Coutts, who has been with Our Lady Peace since 1995 and the subsequent 1997 album, “Clumsy,” which reached platinum status in America.

The current small-scale tour enables the band to get back on the road quickly after quarantine and work on the new material from “Spiritual Machines 2” in the same room, as opposed to the physically distanced recording sessions during the heart of the pandemic.

That’s not to say concertgoers at Photo City won’t get a chance to hear long-standing fan favorites such as “Starseed,” “Superman’s Dead,” “One Man Army,” “Life,” and “Somewhere Out There.”

But don’t expect Our Lady Peace to rest on the laurels of nostalgia, either. “For us to grow and to change and to push each other — that's what keeps the band vital,” Coutts says. “And if we're not going to do that, then (let’s) take five, 10 years off, then go play the casino circuit, do a victory lap. I don't want to do that. I don't feel like I'm ready for that.”

One way that the band has stayed fresh is by playing acoustic versions of its songs. Notable examples include a 2021 EP of six songs from the original “Spiritual Machines,” as well as the latest single “Stop Making Stupid People Famous.”

Coutts says a song is good if the acoustic interpretation retains the emotional vibe of the original. “One of the mantras has always been, can you strip it down to a guitar and a voice, a piano and a voice, and does it still stand up?” he says.


The video for “Stop Making Stupid People Famous” — an infectious song that will go down easy with fans of Modest Mouse and The Killers — includes a cameo from the infamously incarcerated political activist Nadya Tolokonnikova of the Russian band Pussy Riot and spotlights several young difference-makers from around the world, including Saudi Arabian pianist Eman Gusti and aspiring American astronaut Alyssa Carson.

Coutts says that the easiest approach for the video would have been to call out the stupid famous people in question. But in order to better achieve the goal of the song’s title, Our Lady Peace decided to try to make deserving people famous instead, highlighting people who are doing good and inspiring others.


The video led to the creation of Future Famous, a new initiative designed to help raise funds for the passion projects of these “future famous people” and “beacons,” says Coutts. The nascent philanthropic program has an advisory board in place, and will seek corporate sponsorship to supplement financial contributions from the band.

“How can we give you a bigger platform to inspire more people?” Coutts says. “That's really what it comes down to.”

Although Our Lady Peace was close to calling it quits around the time of its 2005 album “Healthy in Paranoid Times,” Coutts says there’s a drug-like quality to making music together that keeps the band members coming back. “We continue to find a way to inspire each other,” he says. “And when that no longer happens, then we can go hang it up.”

Our Lady Peace plays with supporting act Charit Way on Tuesday, Nov. 9, at 8 p.m. at Photo City Music Hall, 543 Atlantic Ave #2. $39.50 in advance, $45 day of show. Masks are required. 18 and over with ID. Call 716-893-2900 for tickets without online fees. Tickets can also be purchased at photocitymusichall.com. ourladypeace.com; futurefamous.org.