Starting Wednesday, dining at restaurants in orange zones can only happen outdoors, with a maximum of four people per table. Gov. Andrew Cuomo on Monday designated a swath of Monroe County — including parts of Brighton, Irondequoit, Gates, and a large part of the city of Rochester — as orange zones due to increasing COVID-19 cases and rates of positive tests.

“Even though a lot of us were kind of expecting to be in this position today, a lot of us still don’t have all of the answers,” said Kelly Bush, the president of the Rochester chapter of the New York State Restaurant Association.

Bush, who also owns the Union Tavern and Marshall Street Bar and Grill, said Cuomo’s announcement was unnerving but not surprising. Bush said she was planning to switch to takeout only even before Cuomo’s action.

“Less and less people are going out, and we just can’t keep the same kind of staff and it's getting worse, we can’t keep operating on this kind of level,” said Bush.

Bush is cautiously optimistic about the switch. Due to the length of the original COVID-19 restrictions, most bars and restaurants have a clearer vision of what steps to take next, she said.

“We’re in a much different situation than we were five months ago when takeout was our only option,” said Bush.

She said the original lockdown was a trial-and-error period, and Bush now knows what people are willing to buy. But she said the pandemic makes the foundation of bars and restaurants shakier.

“Eight months of huge restrictions and you just can’t sustain that,” said Bush. 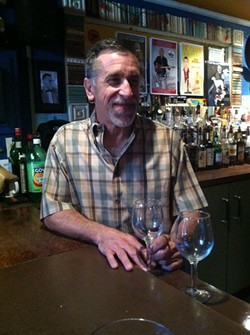 For Abilene Bar and Lounge owner Danny Deutsch, the reality is starker. In 12 years of operation, the small bar has had few to no food options, which means takeout isn’t an option. Deutsch was relying on outdoor service on his bar’s patio for live musical performances and to serve alcohol. With the weather changing and COVID-19 cases rising, Deutch said he doesn’t expect to reopen anytime soon.

“We’ve got a very small operation, with few employees, hopefully we’ll be able to hold on.”

Both Bush and Deutsch received small Paycheck Protection Program, or PPP, loans from the federal government early this year, but said expenses ate into it quickly. They’re hoping for more leadership from Washington and hopefully another stimulus program to help businesses like theirs.

“We’re trying to salvage and save businesses like ours,” said Deutsch. “You hate to think that on the other side of this pandemic that there will be no live music venues left.”

James Brown is a reporter with WXXI News, a media partner of CITY.