When I interviewed Jacqueline Powers, the owner of Orange Glory Café, I successfully refrained from asking, "What's the story, Orange Glory?" She doesn't deserve that. Dad joke omission is the least I could do since throughout my 10 years in Rochester, I had seen the café dozens of times while strolling up East Avenue on the way to The Little Theatre, and had not set foot in it once. I made plenty of excuses as to why not: It looks too small, it's kind of dark in there; there are only a few tables, and they are all full; they closed two hours ago.

Well, I have no excuse now. Orange Glory Café has moved from its small spot on East Avenue to 480 East Main Street. It is a mere three blocks from the old Little Theatre location, but the short distance makes a world of difference. The glass façade facing Main Street allows the restaurant to be bathed in daylight, so it feels like you are outside on a spring day no matter where you sit, which is much more in line with the café's motif. The Main Street location garners more foot traffic from students, patrons, and employees of neighboring Eastman School of Music, the YMCA, School 58, and the other businesses along Main Street. The location change is so fitting that, though it has only been a few weeks, it feels like Orange Glory Café has resided on Main Street this whole time. 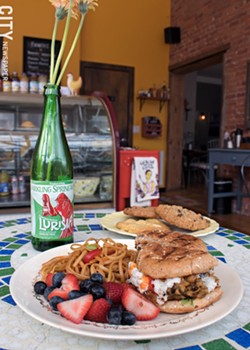 Relocating the café is the latest step in a long journey for Powers. She didn't go to culinary school, but she has always loved to cook and bake. Her day jobs were not satisfying to her, so 15 years ago, she started her own catering business, and rented kitchen space to fulfill orders. She also bought a small, 12-inch orange tree. Then the opportunity arose for her to rent the restaurant space next to The Little. She says she enjoyed her time there, and her catering business and café gained popularity. And that orange tree continued to grow.

The Little's most recent round of renovations meant that Powers' café space would be phased out the theater's expansion, so she needed a new place to house Orange Glory. The 480 East Main Street location was available, and she snatched it up. That orange tree is now four times its original size, basking in the sunlit space.

Much like everything on her menu, Powers got to build her new kitchen from scratch, which is more spacious and brighter than the basement kitchen she had on East Avenue. The bulk of her work is still in catering, but Jacqueline says she enjoys creating food for the café, and she has more freedom to diversify and expand her menu.

On a given day, Orange Glory offers a wide range of sandwiches, salads, wraps, and soups, and there is a good amount of vegetarian options on the menu as well. I had a hearty chickpea eggplant patty with mozzarella on a whole wheat bun, grilled ($8). For $2 more I got a side of sesame noodles and a lemon cookie. "Patty" understates the size of this sandwich, but I gather "a fist of eggplant and chickpea" would not sound as appetizing to most people.

The mozzarella melted evenly over the patty, so with every bite I experienced the dueling sweet-savory taste of roasted chickpeas and eggplant, mellowed out by the mozzarella. The noodles are served cool, tossed with fresh red peppers and light amounts of soy sauce and oil. And the lemon cookie was the perfect post-meal treat. The zesty taste of lemon married nicely with the white chocolate chunks in the cookie, especially when paired with a dark brewed coffee, provided by Fuego Coffee Roasters. 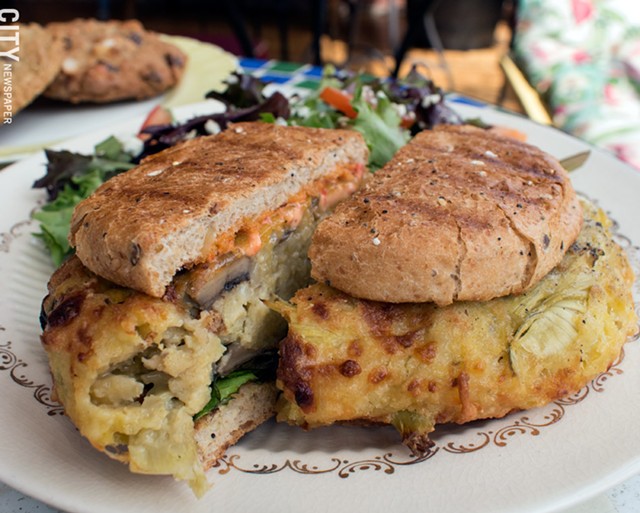 The whole meal was like a dream, and I look forward to trying the other items Orange Glory offers. Also on the menu is a mushroom artichoke sandwich with avocado and cilantro dressing, a spinach burger, and a chicken salad wrap that all looked like they needed to be mine. And that is just the regular menu. The specials board boasts as dynamic a list of choices as the regular menu. This week there was a tomato basil soup and a black bean wrap that stuck out to me. I look forward to seeing what Jacqueline will make next week.