Opioid crisis spares no one

Sometimes, it seems as if drugs have declared a war on us.

The United States has gone through a few heroin epidemics since the drug was first synthesized in the closing years of the 19th century. Crack cocaine ripped through cities in the 1980's and 1990's. And meth is a modern-day plague in some Southern and Midwestern states.

But the current opioid epidemic is unique because it cuts across economic, geographic, and racial lines to reach deep into society. And the numbers are scary.

The Centers for Disease Control says that nationwide, six out of 10 overdose deaths in the US involve opioids, and on average, 91 Americans a day die from opioid overdose. Opioid overdoses have quadrupled since 1999.

The news is bad in the Rochester area, too. From January to June 2016, the Monroe County Medical Examiner's Office confirmed 74 opioid overdose deaths in Monroe and surrounding counties. And it expected that number to double by year's end, says John Ricci, spokesperson for the County Health Department. By comparison, the office recorded 85 opioid overdose deaths in 2015 and 11 in 2011.

But deaths are only part of the picture. Strong Recovery, which is the University of Rochester Medical Center's addiction treatment program, is seeing greater demand for its opioid treatment services, says Patrick Seche, Strong Recovery's director.

"We're treating close to 400 patients and we're now in the process of implementing a plan to expand the program because the demand is high," he says.

The treatment program will have approximately 600 slots when the expansion is completed. As part of the plan, Strong Recovery moved its medication-assisted treatment program — a methadone and buprenorphine clinic — to its facility in Brighton Business Center on West Henrietta Road.

In one sense, the crisis is heroin's latest surge. But it's also tied to a gradual, years-long increase in the number of prescriptions being written for opioid painkillers such as oxycodone and hydrocodone. At the same time, more people are misusing or abusing the medications, though they often aren't the patients who the drugs are prescribed for. 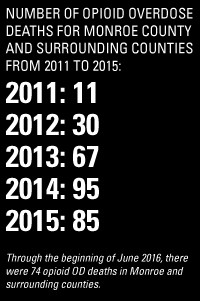 A fraction of the people who abuse the prescription drugs end up hooked on them. And some of those users ultimately turn to heroin when they can't get more pills, either because of availability or cost, Seche says. Heroin is cheaper and more accessible than pills.

But the opioid crisis overlaps with shifting public attitudes toward addiction.

Previous drug crises led to new laws that punished the dealers pushing drugs out onto the streets, but also targeted users. This time, lawmakers tried to limit drug supplies by creating new guidelines for prescriptions. And they're trying to steer more resources toward prevention and treatment.

The following is an edited version of a recent conversation with Seche, who served on a state opioid task force put together by Governor Andrew Cuomo.

CITY: When we talk about the current opioid crisis, what exactly are we talking about?

Seche: The primary problem is overdose deaths. I can't recall off the top of my head in terms of percentages, but that has been significantly rising over the course of the past five to seven years across the board everywhere, nationwide. So that includes our state, our region, our county.

How does the crisis compare to previous heroin epidemics?

I know anecdotally that the rates are much higher in this episode. And there are a couple of reasons for that. One, the heroin is more potent. And the other piece of it is the heroin is cut with more lethal agents or drugs that are even more potent than heroin.

For example, one of the trends now is heroin being cut with fentanyl — which is one of the most potent opioids — and that's leading to a lot of overdose deaths.

The other part of it, too, is that it's a much younger demographic and it also is a more suburban or rural demographic.

Public attitudes seem different than during previous drug crises. There's far greater emphasis on treatment than there was during the crack epidemic, for example.

You're definitely seeing that. There's certainly a more mobilized effort, there's more response from our government entities to it, and there's a lot more advocacy going on.

There are a lot more families speaking up and making sure their lawmakers hear them. It's not a problem that's just affecting a disenfranchised demographic, so there's more of a voice to it now.

Is it fair to say that race and class play a role?

The previous crisis, beyond even the fact that it was mostly an urban problem — a disenfranchised demographic — but it was also an older generation that was being impacted. Now that it's in a younger generation, when we start to have people in their 20's dying from heroin overdoses, there are a lot more parents impacted by this and so parents are speaking up.

There are also a lot more people willing to talk about this openly.

What are the obstacles to addressing the current epidemic? Where have we made progress?

We're still working in terms of access to treatment. The goal is to get to a point where treatment is available on demand; we're not quite there yet. We also have some areas — specifically the rural areas — where a lot of the treatment is not available, not accessible to people.

Eventually there will need to be a connection with our school systems in terms of the education that needs to be provided to kids regarding addiction — what that is and the risk involved — and really embedding that in our education curriculums.

This is very much a family disease: No one goes through addiction alone; there's an impact to their families. Families need support in dealing with this problem, so support for families is a major component.