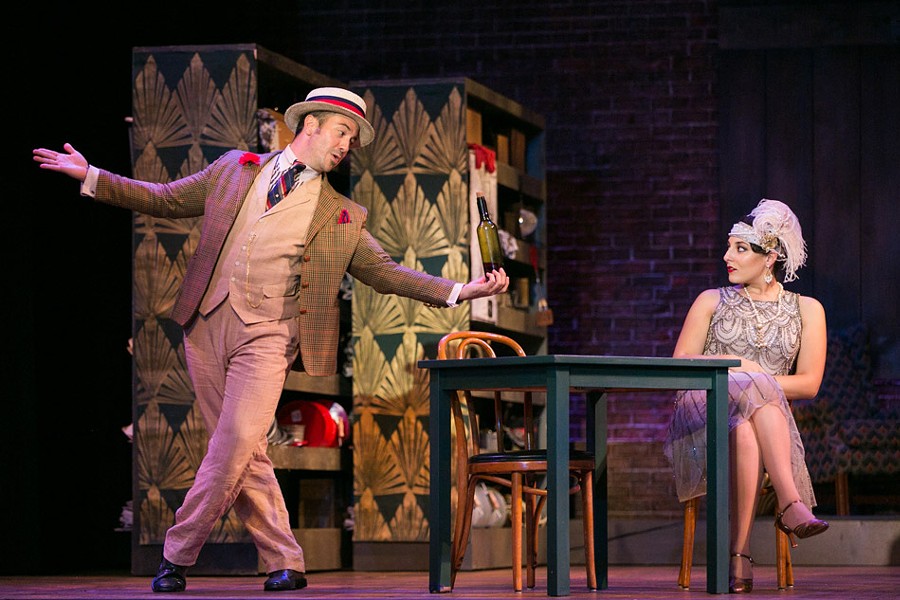 PHOTO BY KEITH WALTERS Dulcamara (Corey Crider) presents the "elixir" to Adina (Andrea Carroll) during the Finger Lakes Opera production of "The Elixir of Love."

"The Elixir of Love"

The only disappointing thing about Finger Lakes Opera's production of "L'elisir d'amore" ("The Elixir of Love") is that it's over after only two performances last weekend. The organization is only in its second year, but with this fresh production of an old favorite, it sets some high standards. This was as pleasurable an opera production as I have seen in a long time.

"The Elixir of Love" has been a staple since it premiered in 1832. The story is simplicity itself: a naïve young man named Nemorino has an unrequited crush on a wealthy young lady named Adina; he enlists the help of a "Doctor" Dulcamara, an itinerant who is peddling cheap wine as a love potion. This being an opera, a baritone in uniform soon shows up to complicate the romance. But this being a comic opera, the entanglements are happily unraveled in time for the curtain.

It's a simple story and plays out nicely in just about any setting -- the original is the Basque countryside, with merry peasants, a traveling army regiment, and the like. To give this old favorite a new look, stage director E. Loren Meeker updated the whole thing to the 1920's, during Prohibition. (It makes sense, considering that the plot centers on imbibing alcohol.) Adina (portrayed here by Andrea Carroll) is now a newspaper publisher whose basement hides a speakeasy; Nemorino (Rolando Sanz) is her stock boy; and his rival Belcore (Liam Bonner), the army man of the original, is now a police sergeant on the take. This also means that the costumes (by Erik Teague) can be much snazzier than all that peasant stuff.

This rethought "L'elisir d'amore" worked like a charm and played almost like a Broadway production, with lively use of the chorus, detailed and well-thought-out business for all the characters, and lots of laughs onstage (and occasionally on the supertitle screen -- the adaptation liberally uses 1920's idioms like "You've got moxie, kid"). I have seldom seen a traditional comic opera production that was so ... well, funny.

It was also very charming and extremely musical, with outstanding singing to go along with the comic acting. Donizetti can be thanked for much of the charm. He is said to have written "L'elisir d'amore" in two weeks, and it sounds it -- not that it's slapdash, but it flows with an irresistible, natural melodies and doesn't contain a note too many. Donizetti also added just enough romantic shading between hero and heroine to make the simple story satisfying -- including Nemorino's "Una furtiva lagrima," this opera's great hit and one of the great, soulful tenor arias.

The aria comes just before the end of the opera, and an experienced opera audience waits eagerly to hear what the tenor will do with it. Rolando Sanz's rendition was beautifully sung, and characterized as a shy and tentative young man revealing the depths of his love. Sanz was extremely adept at physical comedy, but he played his serious moments with delicacy.

As his beloved Adina, Andrea Carroll played a racy, in-charge woman at the beginning, and was very believable in her gradual realization of whom she really loved. Both she and Sanz have bright, flexible voices, and you heard every one of their vocal shadings and saw every gesture in the smallish Wadsworth Auditorium (an ideal venue for an opera that hardly needs to be Met-sized to work).

The cast list isn't much bigger than those two leads. The other two male principals gave broadly comic but musically beautiful performances, Liam Bonner a perfect self-possessed Alpha baritone as Belcore and Corey Crider a hilarious Dulcamara. Bonner's huge baritone voice was almost too big for the room, but it was impressively macho, and he scaled it back nicely for ensembles. Crider, who played Dulcamara as a kind of 1920's song-and-dance man, was delightfully agile onstage and relished every syllable in his numbers. The character of Giannetta doesn't have too much to do, but soprano Angela Libertella Calabrese (helped by the enthusiastic chorus women) made her short Act 2 aria into her own chance to shine.

Musical director and Finger Lakes Opera artistic director Gerard Floriano paced the whole show to perfection, and the orchestra (including several RPO musicians) had every Donizettian detail in place. Finger Lakes Opera may only be in its second year, but based on this "L'elisir d'amore," it'll become a highlight of the summer music scene.