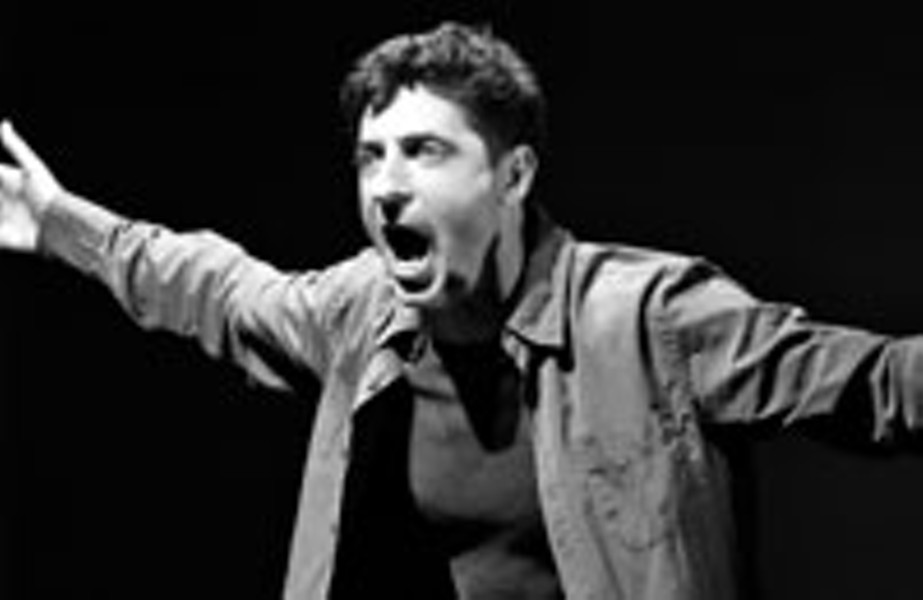 The history of rivals

It's a downright showy play with extremely demanding movement and dialogue for two actors. Shipping Dock's intimate space is incapable of the grand setting Topdog/Underdog got in a big Broadway theater, and that's a plus. Benjamin K. Banks and B. Anthony Gibson play it out in front of you, just feet away, and make it impossible to view with detachment Parks' powerful, poetic interplay between these supporting but competing brothers.

We find that their parents, who abandoned them when the brothers were children, may have been prophetic in choosing the names Lincoln and Booth. Lincoln (Banks) has found "legitimate" employment playing Abraham Lincoln in whiteface at a kind of carnival entertainment where folks pay to shoot him as he pretends to be watching a play. Booth (Gibson), his younger brother, refuses any employment but steals food, clothing, furniture, etc. and shares his apartment, food, and booze with his brother, whose paycheck pays the rent.

Some of the backstory --- via the brothers telling each other about their hardluck lives --- sounds unrealistic, but it seems that they each know some ugly details about their parents that the other doesn't. What unfolds in their history of survival is the basis of their conflicts.

Parks' poetry includes hip-hop language and lyrics but extends to their childhood fantasies and even the patter for the con game known as Three Card Monte. Lincoln was formerly a master of that con. Booth wants Lincoln to teach him, but we see that Booth has no finesse or control. While Booth harbors smoldering resentments, Lincoln's pretended detachment doesn't ring true, and we can't be sure how much either one fantasizes or even deliberately lies.

It's good to see Ben Banks back onstage; he's one of Rochester's most accomplished actors and hasn't been acting here for some time. His "moves" and insidiously hypnotic patter with the card tricks are really convincing, and he gets inside this complicated, layered role with no effort showing. Gibson, who started at Shipping Dock when he was a teenager playing a pupil to Banks' teacher, has developed enough skill and presence to play this tricky duet as Banks' equal.

This is a play that audiences will want to cheer and argue about and will certainly remember.

You should go if you want to take advantage of the rare opportunity to see a complex, Pulitzer-winning well-played on an intimate, local stage.

Man on the street

Geva's season opener, The Road Home: Re-Membering America, is Marc Wolf's one-man show re-creating his road trip back to New York City from the West Coast just after 9/11. An attractive and amusing performer, Wolf impersonates the men, women, and children he met along the way, quoting from their responses to the attacks on the World Trade Center and their comments on New York and the world we now live in.

Although he interviews people in the District of Columbia, Wolf makes no mention of the attack on the Pentagon or any such 9/11 news outside New York. He doesn't really become the other people so much as suggest their voices and mannerisms. For the most part their responses are, to put it mildly, uninspiring. Credit Wolf with never sentimentalizing his subjects nor unkindly making fun of them. They are varied but ordinary people whom he met from the Redwoods area of Northern California to Nevada, San Diego, Mississippi, Memphis, Virginia, and on up the coast to New York.

He does create a few comic riffs with some of the characters he met, notably an empty-headed young woman near the Mexican border and a rare, straight Washington, D.C. hairdresser. Most seem predictably self-involved and only peripherally interested in the terrible attack on New York. The one movingly trenchant comment comes climactically from an architecture critic back in New York City. Speaking of "the destruction of totems," this man provides the title of Wolf's play by discussing what is needed for remembering, or more precisely, "Re-Membering," as opposed to dismemberment.

Director David Schweizer and scenic designer Andrew Lieberman pattern the movement of key props and projections that identify the places and speakers in order to give what is essentially a monologue a sense of composition. And the journey is both entertaining and minimally enlightening. But I can't buy into the concluding symbolic emphasis Wolf tries to place upon some "magic" beans a little girl gives him to carry across the country. If, as he planned to, he did plant them at Ground Zero in Lower Manhattan, I can't think that such lightweight material will grow to reveal giant anything.

You should go if you're looking for reflection on --- not necessarily enlightenment of --- the 9/11 attacks. Or if you're interested in a world premiere from the man who turned Don't Ask Don't Tell into an Obie-winning play.