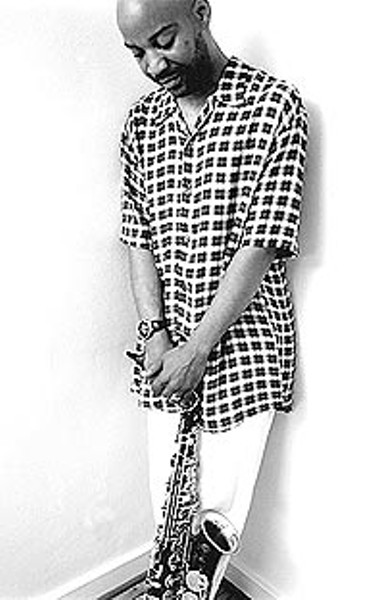 Gray Mayfield will never forget the day Wynton Marsalis showed up at his dorm room.

"A friend of mine used to study with Wynton. He was always saying, 'I'm going to contact Wynton and have him come and hear you.' So, one day, when Wynton was doing something at one of the colleges at Greensboro, he just came down to Winston-Salem. Next thing I know someone's knocking on my door. It's Wynton and the three other guys in his band."

Mayfield, who recently released his first album, discovered jazz at the North Carolina School of the Arts, but he'd been playing in fusion groups, emulating Grover Washington Jr. --- a long way from Marsalis' purist vision.

"I had my soprano sax and he said 'Play a note for me.' So I played one note and he outlined everybody that I checked out fusion-wise. He said, 'Man, that's cool, but let's go play some basketball and let's go to the library and I'll show you some music to check out.' So he gave me all these books and recordings by people like Sidney Bechet and Louis Armstrong."

Marsalis may be perceptive, but one note?

"It's easy to detect, when you hear a soprano player play a note, if he's influenced by fusion or straight-ahead because at that time soprano was not that dominant in the straight-ahead field. It was more dominant in the fusion field. If I'd been checkin' out 'My Favorite Things,' he would have known in an instant, 'yeah --- you're into Trane.' If you ask a guy to play a note and he really plays a note with a meaning behind it, as opposed to just playing the note, you can tell."

The significance of the day he met Marsalis becomes apparent before you even listen to Mayfield's new self-titled album. Other than Roland Guerin on bass, Mayfield's band consists of Ellis Marsalis (piano), Delfeayo Marsalis (trombone), and Jason Marsalis (drums).

Once you listen, it's easy to see why Mayfield's in such good company. He can play with the best alto players of his generation and he's no slouch at writing. In fact, his compositions sound like follow-ups to John Coltrane's Giant Steps.

But back in the dorm that day, Mayfield's musical experience was limited. Growing up in Huntsville, Alabama, it was tough getting his parents to take music seriously.

He and his three brothers had always loved music. They would lip-sync to the Ohio Players or Elton John at talent shows and make instruments and pretend to perform.

"All of my brothers asked to play the drums and my parents weren't really with it, so I had to ask for an instrument that I knew would catch them off guard. I figured if I said 'saxophone,' that would make them think."

It worked. Mayfield started playing saxophone in church when he was 17. He didn't take formal lessons. He would just play along with recordings.

"Ever since I got the saxophone, that was it. I played whatever I could play regardless of the idiom. I just wanted to play the horn."

But he was good enough to be noticed by James Houlik, a top classical saxophone player who taught at NCSA. Mayfield won a scholarship to study classical sax with Houlik.

"When I got to college I had no idea what an F7 was," Mayfield says. "A friend introduced me to Trane, Johnny Hodges, Sonny Stitt. Then he introduced me to Grover Washington Jr. and David Sanborn. Automatically I was more attracted to the backbeat music. So I was cloning that, the fusion. I started jazz late --- real late."

But with a mentor like Marsalis, he learned fast.

"We exchanged numbers and he would call me up at weird times and he'd be at the piano and play a chord and ask me what kind of chord it was. He'd ask me what I'm checking out."

Didn't he think it was strange for a star to be calling him?

"It startled me at first, but that's just his nature. After I got to know him and a lot of the guys from New Orleans, that's just how they are."

Marsalis recommended that Mayfield study with his father, piano great Ellis Marsalis, in the jazz program he'd just started at the University of New Orleans. That same year Mayfield won a competition to play in Europe. He was on the road when he heard he'd won a scholarship to study in New Orleans.

The University of New Orleans was the place to be in the early 1990s. Among the young musicians enrolled in Marsalis' program were bassist Chris Thomas, drummer Brian Blade, and pianist Peter Martin. All have gone on to become top players.

Mayfield had a trio in New Orleans with Blade and Thomas, both of whom moved to New York. He was thinking about joining them until Garth Fagan Dance came to New Orleans to perform, bringing along a dancer who would become Mayfield's wife.

"I had two friends who I went to school with in the company so they were calling me up and we would hang out. Sharon --- my wife --- invited me to come up and check out Rochester because Eastman was here. So that's what I did. I hooked up with Garth and that was it. Next thing you know two years go by, three years go by..."

Mayfield first performed with Fagan's company in the mid-1990s. He also took on a variety of freelance gigs, playing on cruises and touring with Buckwheat Zydeco.

Despite the experience, he'd have preferred to work as a sideman with an experienced musician for several years before making a CD.

"It was really against my will to do a CD as a leader because to me that's not really going through the ropes of really playing this music," he says. "But if I didn't do that nobody would know of me."

His main reason for making the album was "to start documenting where I am."

"I want to communicate to musicians. And I wanted to do it for my family. I lost my brother a couple of years ago. I was on the road when he died. It really messed me up. He was my favorite brother; he taught me all the ropes. He was the type of person who liked to party all the time and it kind of caught up with him. After that this whole music thing started coming into another perspective, like 'What are you doing with your life?' You need to start making some profound statements and some profound moves as far as being a musician."

He recorded in New Orleans because, "after being away from Ellis for eight or 10 years, I wanted to play for him, record with him, and show him the things that I've learned on my own in a secluded way."

He only expected the veteran pianist to play on one tune. But Marsalis showed up early and asked "How many tunes you want me to play on?"

"I said, 'That's up to you. As long as you feel like staying and playing music.' He just played on so many tunes. I'm like, 'Great!'"

One thing's for sure: The next time Wynton Marsalis stops by to see Mayfield, he's going to hear a considerably different note.

Gray Mayfield is available at the Bop Shop and both Record Archive locations.