PHOTO BY MAX SCHULTE Most of the more than 120 horses in the Rodriguezes' yard at the corner of North and St. Jacob streets have been dismantled from their spring-based rockers and placed between flowers and trees.

For many people, Puerto Rico conjures images of pristine beaches and lush rainforests.

When Zenobio Rodriguez Jr. recalls the Caribbean island of his youth, he sees horses.

Junior, as he goes by, talks of the Paso Fino horses of Puerto Rico with such fondness that his eyes mist over. In describing them, he curls his weathered hands into tiny fists that he bobs up and down in a prancing motion to mimic the animals’ fine-step gait.

“The horses, they are my passion, you know?” he said.

His father owned horses. His uncle owned horses. Now, at 63 years old, Junior carries on the family tradition at his home in northeast Rochester, some 1,800 miles from his native land.

Packed into the fifth-of-an-acre lot he owns with his wife, Carmen, at the corner of North and St. Jacob streets are more than 120 horses — most of them knee-high, plastic horses that have been dismantled from their spring-based rockers.


Like the horses of his childhood, some are for show, some are workers, some are wild. But all of them are hand-painted in brilliant pastels that, like the colorful Spanish colonial homes on the coast of old San Juan, collect into a visual kaleidoscope when taken in from afar.

Puerto Rico is known as “Isla del Encanto,” or “Island of Enchantment.” So it is with the cheerful slice of Puerto Rico that the Rodriguezes have carved out of their corner of the world. Their yard is part vegetable farm, part amusement park, and, to some, part oasis.

“The people say when they come here to be sitting and see the horses, ‘I’m happy,’” Junior said. “The people come and say, ‘Oh my God, I breathe here. I have peace, and the problems in my mind are gone.’”

By “the people,” Junior means not only friends and family, but strangers who stop outside the chain link fence ringing his property to marvel at the display in his yard. If he spots them, and they seem friendly, he invites them inside to look around and introduces them to his horses.

There are horses wearing hardhats, carrying shovels, and saddled with baskets he fashioned out of discarded pool table pockets. These are the workers. Others carry tennis racquets or sport boxing gloves on their hooves. These are the show horses.

Some horses hide high in the branches of a maple tree. Another is on top of his garage, above a chicken coop, forever frozen in full gallop. Why would a horse be in a tree or on a rooftop? Because someone Junior loved suggested he place them there. 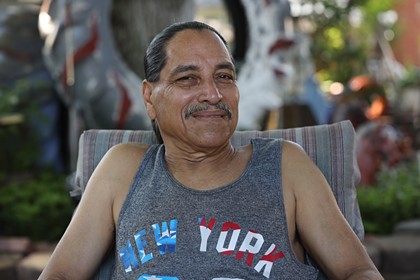 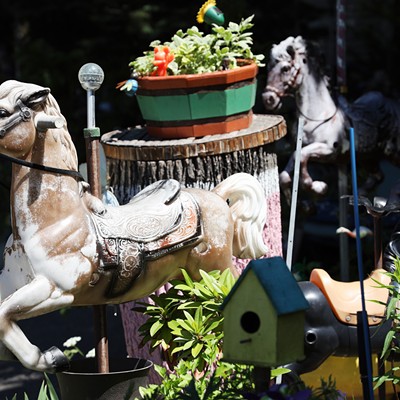 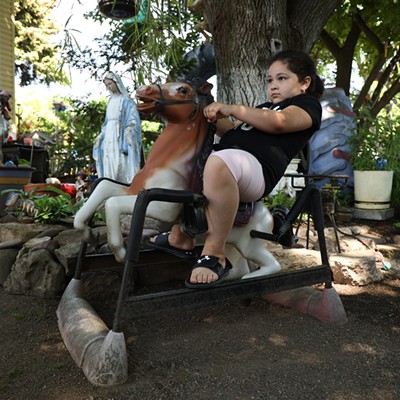 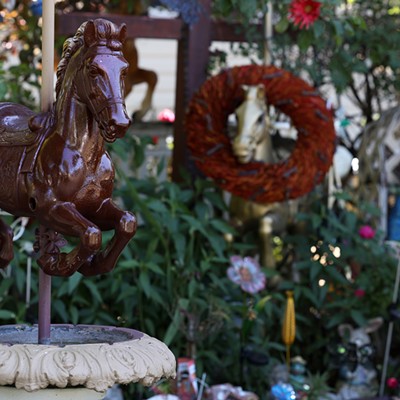 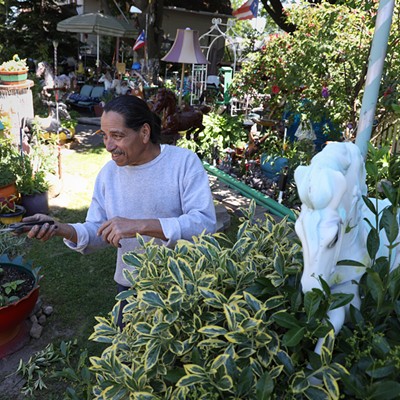 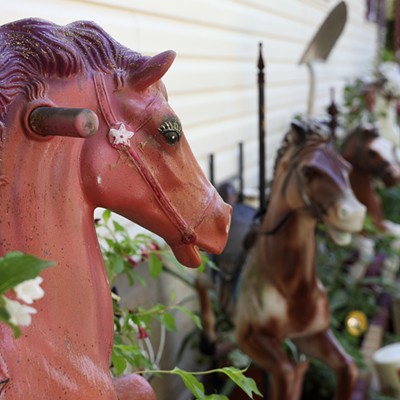 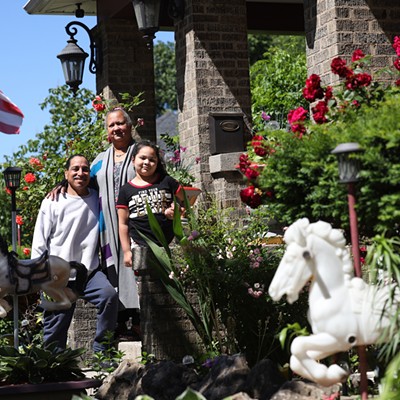 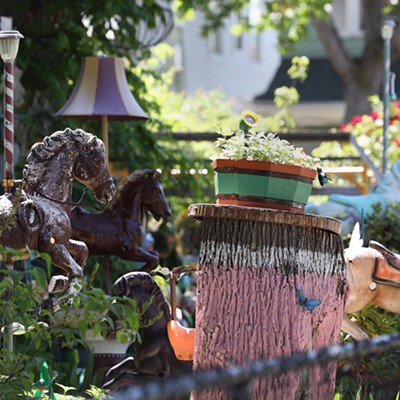 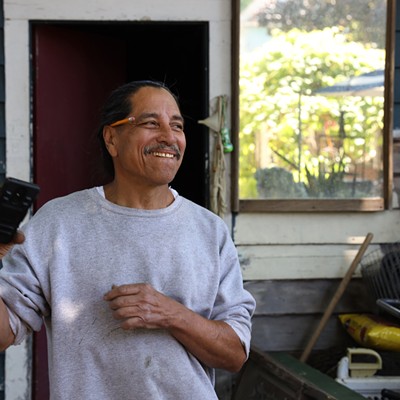 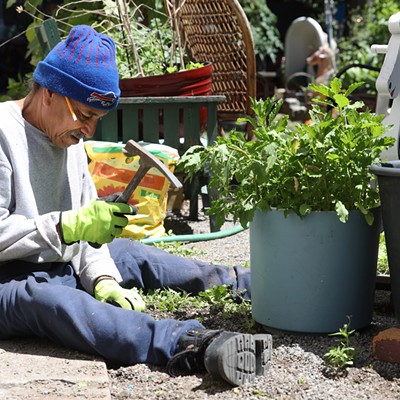 Where rocking horses of Puerto Rico prance freely
By David Andreatta
Click to View 11 slides
“This is Ricardo,” he said of his favorite horse, a handsome brown steed standing sentinel among a row of comrades in a garden bed. The horse was named after a friend who gave it to Junior before he died.

All of it makes sense to Junior, who arranges his horses and the odd assortment of kitsch he has upcycled with an artist’s eye. Every horse, every statue of the Virgin Mary, every carefully hand-painted tractor tire that Junior has shaped into flower pots, has a story.

“He is an artist,” Carmen said of her husband. “Whatever he gets, he makes something with it.”

Junior and Carmen’s story began in Puerto Rico, in the coastal town of Dorado, about 15 miles west of San Juan. The way they tell it, he worked for the local school district, she made ceramics she sold to a local souvenir shop.

They each had a child from a previous relationship before they married in 1981 and had two more children together.

Carmen, 58, came to Rochester in 1986 to help three younger half-sisters who were already here, but whose circumstances with an ailing mother, she recalled, had them on the brink of entering foster care. She left Puerto Rico with $150, a toddler, and an infant, and said she arrived in town with a few dollars left to take care of them and her siblings, knowing no English.

Junior and their other children joined her a few months later and, by 1995, Carmen had saved enough money as a school bus driver to buy their home on North Street. Junior is unable to work due to a traumatic brain injury that he and Carmen said he suffered in Puerto Rico when hurricane winds blew open a heavy door that struck him in the head. Within a year of buying their home, Junior spied what would become the first of his horses in a yard on Scrantom Street off North Clinton Avenue. He asked their owner how much he would take for the horses.

Junior said he paid the man about $5 and walked off with what would become Deyanira, a white and purple mare, and John Paul, a gray workhorse, named for their two grandchildren at the time. After that, it was off to the races with Junior’s passion for horses.

Today, the Rodriguezes count 123 horses in their yard and said they have more in their attic, basement, and garage. Sometimes, they said, they find horses left for them on their front porch, which is flanked by meticulously maintained rose bushes and, of course, a pair of horses.

Some neighbors complain that the exhibition is garish. They called it an “eyesore” and “overkill.” But others called it “beautiful” and “happy.” To the naysayers, the Rodriguezes posted a sign that reads, “Live your life, not mine.”

The Rodriguezes’ lives have been in Rochester for 35 years, but their Puerto Rico, they said, is in their hearts and minds and yard.

“I feel like I’m in Puerto Rico,” Carmen said as she surveyed her husband’s handiwork. “This is my little Puerto Rico.”